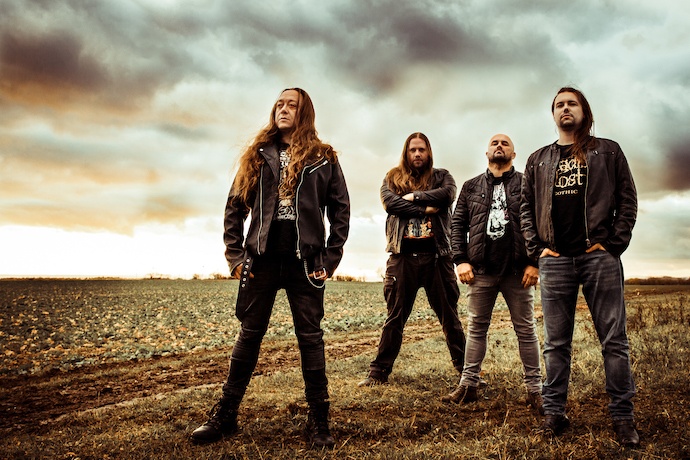 (Comrade Aleks was fortunate to get this recent interview with Remco Kreft (Soulburn, Bodyfarm) about his OSDM band Graceless, who will be releasing their second album on March 27th through Raw Skull Recordz.)

Created in June 2016, this quite extreme and merciless death doom act consists of two of Soulburn’s members – Remco Kreft (vocals, guitars) and Marc Verhaar — alongside Björn Knäckebröd (guitars) and Jasper Aptroot who gained experience in local brutal acts like Celesterre, Nailgun Massacre, and Xenomorph. Since Graceless’ founding they have stay focused, bitter and angry.

The band’s sophomore album Where Vultures Know Your Name will see the light of day through Raw Skull Recordz on March 27th, 2020. I consider myself a lucky guy, as I’ve already heard this Armageddon-evoking album, which surpasses their debut work Shadowlands (Raw Skull Recordz, 2017). And moreover, I was lucky enough to get in contact with Remco and learn more about Graceless’ dark truths.

Hi Remco! The band was founded in 2016 and there haven’ been changes in the lineup during this relatively brief period. What has helped you to stay focused on Graceless, with all the bands where you play?

Graceless is my main priority because it is the band I founded. Soulburn is Eric’s band and we try to schedule everything so it won’t bite each other.  But it can be hard sometimes. My role in Bodyfarm ends in a couple of weeks. Two bands is more than enough.

You and Marc performed similar crushing death doom in Soulburn. How much of Soulburn do you hear in Graceless?

I don’t think very much. All the Soulburn songs are made by Eric and the lyrics are done by Twan. Of course Eric influenced me over the years, but the bands are very different. Soulburn is much more old school back metal. I think there is hardly any black metal in Graceless.

Can you tell there are some traditions of that kind of death doom in Netherlands? Bands like Delirium, Mourning, Spina Bifida, and few more, alongside Asphyx, appeared earlier than the UK Three, though many of them changed their style or simply disbanded.

I do think we have had some very good doom/death metal bands in the past, and we still do. And I love all the bands you just mentioned.

By the way, do you see Graceless as a death/doom or doom/death band or whatever? Does that make a difference for you?

I don’t care how people call the band or under what flag they want to put us. We make old school death metal with doom parts. Nothing more, nothing less.

You recorded the first album Shadowlands with Jan-Willem van Voorst. Actually, I didn’t see if he hD worked with any other bands. How did you spend that session?

He actually is our sound guy for live gigs. He also does bands like God Dethroned, Asphyx, Pestilence and Bodyfarm, so he know his way around sound knobs. He told us that he also did recordings, and we were just looking for a place to record our first album. He already knew our songs, so we thought…why the hell not. And he did a great job.

Did Shadowlands meet your expectations? And did your background in Soulburn help you to promote the band?

It went far beyond expectations. All the goals we had were crushed in the last 2 years. We played an insane amount of gigs, did some great festivals (Eindhoven Metal Meeting, Ruhrpott Metal Meeting, Bavarian Metal Meeting), sold out all vinyl’s and made a spilt LP with Grond. And we have so much to look forward to (like Party San!).

Of course my background with Soulburn helped. You get much more attention when you play in a well-known band.

Raw Skull are going to release Graceless’ second album Where Vultures Know Your Name in March. And your split with Grond, Endless Spiral of Terror, was released previously in 2019. Were these songs recorded in one session? Did you see the split as a teaser for the album?

It was recorded in one session. We recorded like 15 tracks, and the best ones are on Where Vultures Know Your Name. Rai of Raw Skull knew we had songs left and heard the same thing about Grond. So he suggested to make a split LP. Of course we said yes!

We have played with Grond on Schoonebeek Death Fest with Soulburn, so yeah we knew them. I think they are awesome. 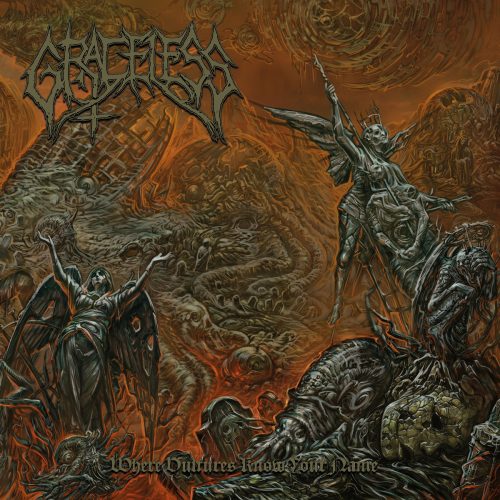 The music you play has not much room for improvement when you’ve reached a certain level. Shadowlands and your experience in other bands already set a high mark of quality. Do you see whether Where Vultures Know Your Name is a stronger album to some degree?

I think there is always room for improvement. To do things differently, better, harder or more beautiful. You can make a death metal song in so many ways. I already know what we can do better in the next album. But first the Vultures album. I think it is better in every way; songs, production, balance, variety. This album has so much more to offer. I just can’t wait to let everybody hear it.

Did you have some difficult periods during the work on the new songs? Or was it just an easy-going session?

It is the only thing I am good at, and what I like to do. We never have problems writing songs. I write a pile of songs and together we pick the songs we think are the best. Everybody is free to fill in his parts and they always make the songs better.

There’s an extremely warm winter in Europe and Russia this year, and it’s disturbing…. Do you use the band to approach realistic topics in your songs? Such as climate change, natural disasters, hypocrisy, and so on… Though I guess you do — you have the “Heroin Filled Veins” song at least…

We never go political or so. I try to keep the lyrics about the darkness inside people. The struggle of a person. Not the big world problems like climate change, war, religion. I use all those subjects, but I make it personal. The struggle with depression, loneliness, being abandoned, addictions, relations. The dark side of life that could hit any person.

Hah, and do you know if the gents from Extreme Cold Winter have finally have finished their album?

The last thing I heard is that Pim still has to work on his side of the album, and then they are pretty close to the end. (but that is still a rumor!)

What is your touring schedule due for the album’s release? Do you have an opportunity to support it live at full capacity?

We play a lot live, and for the first album we mainly did the Netherlands, Germany, and Belgium. With this album we want to expand and make it worldwide.

How far do you aim to get on this tour? And what’s your most remarkable touring experience with other bands?

We want to play the rest of Europe of course, and also do Asia, North and South America, Russia, and whatever comes in our way. We have no boundaries!

We’ve played with so many of our heroes already and many of them became friends on the road. I think that is one of the best things of touring. Asphyx, Entombed AD, Legion of the Damned, Vallenfyre, Entrails, 1914, Dismember, Dark Tranquillity, Possessed, Macabre, Skeletal Remains — you name it!