(Andy Synn turned in this review of the performances by Leeched, Geist, and Tuskar in Nottingham, England last night — January 30th — with some of his own video documentation of the experience.)

Sometimes, despite all our best intentions, things just don’t work out quite the way we want them to.

That was certainly the case this evening, as, for various reasons which I won’t go into here, I ended up being massively delayed getting to this show, and therefore missed both the local openers Pemphigoid and Underdark.

This was actually doubly-unfortunate too – firstly because while I’ve never been the biggest fan of the latter, the last few times I’ve seen them it’s felt like they’re finally starting to live up to (at least some of) the hype , so I was hoping to see if this trend continued, and secondly because I’ve not yet managed to catch the former band live, and this was going to be my first chance to do so.

Still, putting aside these regrets and recriminations for the moment, I suppose you’re all wondering how the rest of the show went? 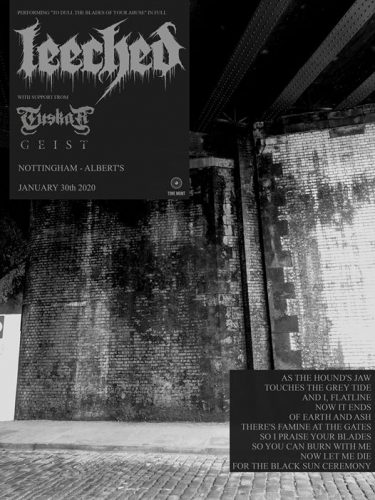 By the time I (finally) reached the venue Sludge/Doom duo Tuskar had already started, so I hustled my way over to the right-hand side of the stage to grab myself a good view.

Despite only having two EPs to their name, the band (guitarist Tom Dimmock and vocalist/drummer Tyler Hodges) certainly weren’t lacking in material, as many of their songs run into the 7-8 minute zone, each one overflowing with meaty, muscular riffs, rock-solid rhythmic drum patters, and gruff vocal hooks.

I’ve got to say, as my first exposure to the band, this was a damn fine introduction, and even though I didn’t manage to grab a video of their set, I’d be remiss if I didn’t recommend that you check them out – either live or on record – next time you have chance.

Now, some of you may remember my praiseworthy review of Geist’s latest album, Swarming Season, in October last year, where I waxed lyrical about the band’s visceral, vitriolic brand of savage Metallic Hardcore.

As you might imagine then, I was very excited to see them perform this evening, and they did not disappoint, delivering an absolutely stunning set of pissed-off, punk-fuelled polemic and scalding sonic shrapnel.

Both impressively tight, yet as raw and fractious as the wildest of riots, every track – including a stupendous opening run-through of “Unnatural Selection”, which you can check out below – detonated like a pipe-bomb flung into the audience, while the between-song calls for unity and the rejection of intolerance and division, were delivered with an unflinching passion which kept them from being preachy while also giving them some real weight.

Needless to say, I was very impressed with what I saw/heard, and made sure to grab a copy of Swaming Season from the merch desk afterwards, and am really looking forward to catching Geist again when they tour with Calligram and Harrowed in March.

Tonight, however, belonged to one band, and one band alone, and those of you who read my review of To Dull the Blades of Your Abuse earlier this week (an album which, even though it’s only January, I could definitely see making it all the way onto my year-end list) will perhaps have some idea of just how much I was anticipating seeing Leeched this evening.

Let me be clear about one thing – these guys might just be the best band in the UK right now.

Yes, there are certainly other bands getting more hype and more attention, and I don’t begrudge them that. But for sheer, unadulterated, uncompromising, unflinching fury… somewhere between Dragged Into Sunlight and Cult of Luna at their heaviest and most intense… well, to my mind there’s very few bands operating at quite the same level.

Performing in a haze of smoke (which, on three occasions, actually set off the venue’s fire alarm and killed the onstage power) and covered by a pall of darkness, intermittently broken by flashes of leprous light, the band (having now metastasized, it seems, to a quintet) unleashed absolute hell on the audience over the course of just under forty minutes.

From bone-crushing breakdowns to frantic spasms of blastbeats to discordant, demonically distorted riffs, every single song – including the horrifically heavy rendition of “The Grey Tide” thatbyou’ll find below – hit with the weight of a collapsing building, and every single vocal was barked and bellowed with the rage and fury of someone who’d taken all they could from this cold, unfeeling world.

Speaking of cold and unfeeling, one thing that really gets emphasised live is the mechanistic, industrial side of the band’s sound – think Godflesh, Ministry, Killing Joke – and the strobing soundscapes, pulsating drones, and discordant eruptions of noise that permeated and punctuated the band’s entire set consistently left you feeling dizzy and disoriented, even as the sheer force of the music threatened to grind your bones to powder.

This is the sort of set, and the sort of band, I’d love to see at MDF one year, just so I can get the rest of the NCS crew to enjoy/endure it with me.

So trust me, if you get a chance to see Leeched live, do so. You won’t regret it.