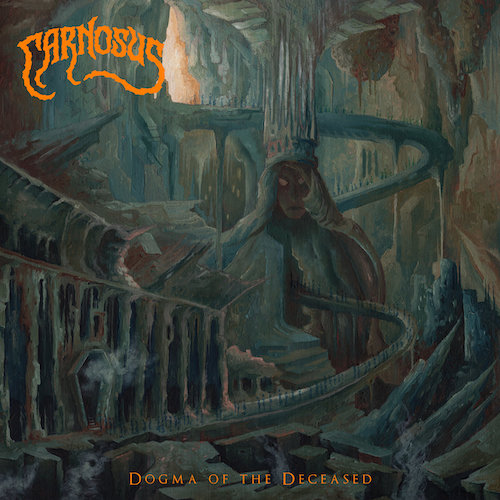 The Swedish melodic death/thrash band Carnosus are both young in age and youthful in their career, but their rapid progress has been unusually impressive. Their first EP, 2016’s The Universal Culmination (which they recorded with Tomas Skogsberg at Stockholm’s famed Sunlight Studio) opened a lot of eyes and ears, earning them an accolade from Sweden’s Close-Up Magazine as “the best unsigned band in Sweden” in May 2016. But it’s clear that there was still a lot of untapped potential in this group, because their debut album Dogma of the Deceased is a big step up over the EP, in both its songwriting and its execution

This time Carnosus recorded the album at Studio Fredman with producers Fredrik Nordström and Robert Kukla, and the record features memorable cover art by Vojtěch “Moonroot” Doubek. The album will be co-released on March 13th by Satanath Records (Russia) and Shirley Road Records (U.S.), and today we’re bringing you the lyric video for a powerful new single from the album named “Deceptive Authority“. 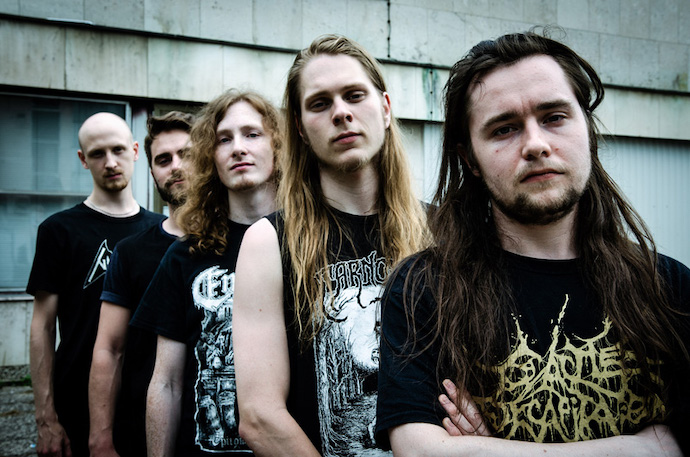 Consistent with the pitch-black world-view reflected in the lyrics, which are part of a conceptual tale of a totalitarian empire veiled in gloom, “Deceptive Authority” creates a grim and beleaguered mood. Threaded with bleak yet serpentine melodies which insinuate themselves in the mind ever more deeply with each passing minute, the song’s atmosphere is desolate — but it also seethes with building rage, thanks in part to the monstrous growls and scorching screams in the vocals (which are sometimes combined for added intensity).

As gloom-cloaked as the music is, however, it’s also electrifying, thanks to the darting and swirling fretwork and the jolting and jackhammering rhythms that accompany the groaning chords and savage vocals. The music soars in the choruses, but reaches its true zenith in a spectacularly scintillating guitar solo that brings the track to a close.

To get a glimpse of a different, more turbocharged and thrash-driven, side of this band’s talents, be sure to check out the first-released single from the album, “Lost To Funereal Desires” (which you’ll also find below) — and it’s available as a free download at Bandcamp. 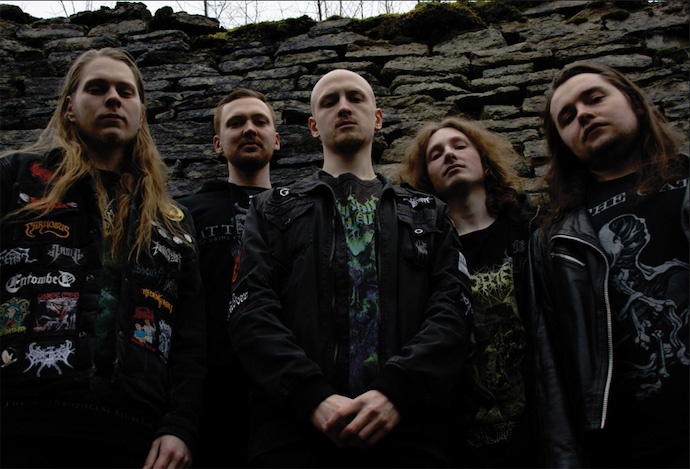 Dogma of the Deceased will be released by Satanath Records and Shirley Road Records in a jewel-case CD edition with 12-page booklet, as well as digitally, and it’s available for pre-order now. The labels recommend the album for fans of Revocation, The Black Dahlia Murder, Sylosis, Arsis, At the Gates, and Rivers of Nihil.