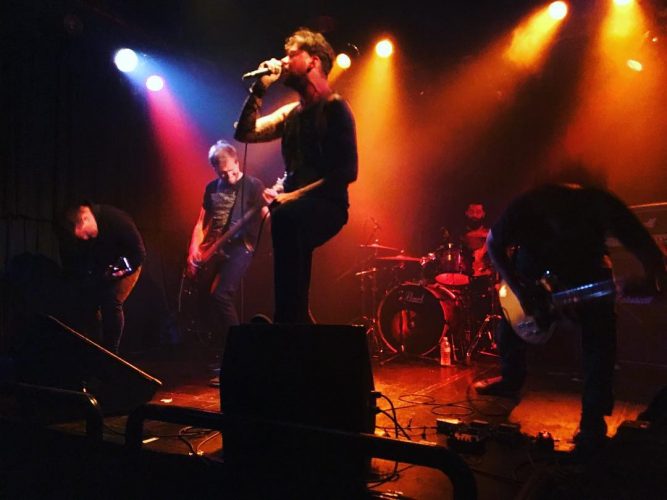 (After a months-long hiatus, Andy Synn has brought us a new episode in this series devoted to lyrics in metal, revealing the thoughts of Yonni Chapatte, vocalist of the Swiss band Rorcal and of the band Kehlvin.)

In case you haven’t noticed I am a HUGE fan of Blackened Sludgemonsters Rorcal.

Just read my write-up of their most recent album, Muladona, in my Critical Top Ten list from last year if you don’t believe me!

Heck, if not listening to the band myself I’m probably extolling their many virtues to someone else, trying to get them to do so, and anyone who counts themselves a fan of artists like Inter Arma, Lord Mantis, Phantom Winter, or Dragged Into Sunlight should make sure to blitz their way through Rorcal’s back-catalogue ASAP.

Before that, however, you might want to give the following article a read, where the band’s vocalist, Yonni Chapatte goes into great detail about his background, his methods, and the various concepts which underpin Rorcal’s work.

I started writing lyrics for my first band back in 1998 when I was 15. My English was REALLY bad, and all I really wanted was to scream like a pig. So, to be honest, at that time my “songs” were mostly random words put together with absolutely no meaning! I tried to write some lyrics in my native language (French) but was unable to make them sound good… (but it IS possible, Cantique Lépreux for instance, are awesome and all the lyrics are in French).

Anyway, the big change was when I joined Kehlvin in 1999, and by the time we recorded our first album in 2004, I was a very different boy! I was studying Philosophy, French literature, and some English (which I chose mostly to be a better lyricist, to be honest) at the University of Neuchâtel and I was very into religious philosophy and the philosophy of art.

Kehlvin’s first album was the first time I really worked on my lyrics in order to, well, say something. One of my main concerns was atheism, and our second album, Holy Cancer, was all about philosophically demonstrating that religion was truly mankind’s cancer, whereas on our last album, The Orchard of Forking Path, the main theme was causal determinism, the idea that everything that happens is meant to happen exactly this way and could not have happened any other way, at all.

There’s never been any question about my lyrics in that band. To be honest they don’t give a fuck about what I’m screaming and mostly see the vocals as another instrument, which is fine for me!

I also recorded two albums with a Grindcore/Math Metal band called Yog. In that band, Fabien, the drummer, was the incontestable leader, writing all the music and, at first, also writing all the lyrics. However on Yog’s second album, I was more involved with the lyrics-writing process.

One of the recurring themes was misanthropy, the hatred for mankind. We  had a song called “92%” which was the ratio of people who should die in order that life on earth would become bearable!

Yog died (!) around 2011 and I then joined Rorcal, who were just about to release Vilagvege, so I had to learn the previous singer’s lyrics. They were about the end of the world, so nice and simple!

In Kehlvin my inspiration comes mostly from philosophy. The album we’re currently recording is about holism, the idea that matter, life and mind are all different aspects of the same thing. But I’ve also added a more “pop” side to it by mixing deep reflection about the origin of the mind with some Dirk Gently oriented craziness! I’m a huge fan of Douglas Adams and Dirk Gently’s Holistic Detective Agency. The TV show was also a huge influence [Editorial note – bring back Dirk Gently!]

In Rorcal the process is very particular. We always choose a very defined concept before writing a single note. The concept for Creon came from our drummer Ron. Muladona was our guitarist Jp’s idea. When the concept has been approved by us all, I start by reading a lot to orient myself, then I write a first draft of raw ideas that works as a primary structure of the whole album. I give that to the others in order to guide the overall direction as to where the songs should head – how the narrative needs to develop, which parts of the song should be slow, or dark, or fast, or gloomy, etc.

When we were writing Creon, I’d already read both Sophocles and Anouilh plays about the tragedy of Antigone, and a huge number of scholarly papers about it too, before I started to write my own interpretation of the story.

On Muladona the process was quite different, as the album is based on the novel of the same name by Eric Stener Carlson, in which a young boy is visited by a half-lady, half-mule monster who tells him a horror tale each night for 7 days. So we decided to write a song about each one of the seven tales.

I read the book about 6 or 7 times, taking notes, and then I started to write down my own views about these tales. I had the chance to collaborate with Eric, as he lives in Geneva, and we met in person in order to “fine tune” all the lyrics. It was very interesting as we each had our very personal views on the tales, and a real honour to work with such a talented writer! 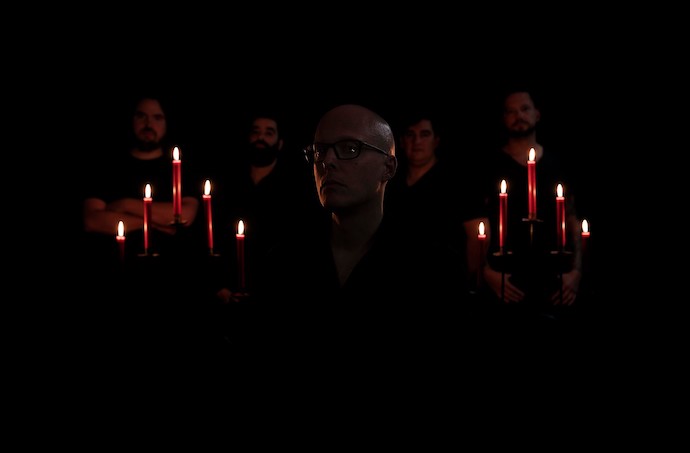 Leonard Cohen is the greatest poet of all time. He is my absolute hero, and to be perfectly honest, I’ve already stolen some of his words for some songs of mine! We’ve also recorded a cover of his song “Who by Fire” with Kehlvin, which is an absolute masterpiece lyrically speaking!

Here are some lyrics from Sean Ingram, frontman of Coalesce, which are tattooed on my right arm (so yeah, I guess they resonate quite a lot with me!):

What more do you want from me, some sort of apology?

Well I promise that forgiveness is the most you’ll get

And what I demand of you is to put up or shut.

So make your decision, but remember; you can’t kill us all

As to my own lyrics, there is a line that I like a lot that takes place in one of the songs on the split album we’ve released with our friends from Process of Guilt. There was no well-defined concept for these three songs, but they were really fucking Black Metal, so I decided to write lyrics in a bit of a Marduk style, all Satan and stuff.

Attack the power. Strangle the snake.

Swallow the  apple and spit it on them.

Satanism… so much fun!

Fortunately, I’ve evolved a lot since I wrote my first lyrics. Back then I didn’t really give a damn about what I was singing and now I carefully design every word. I believe that the real game-changer was my integration in Rorcal, which really forces me to think deeply about each album concept and has greatly changed my perception regarding my writing. 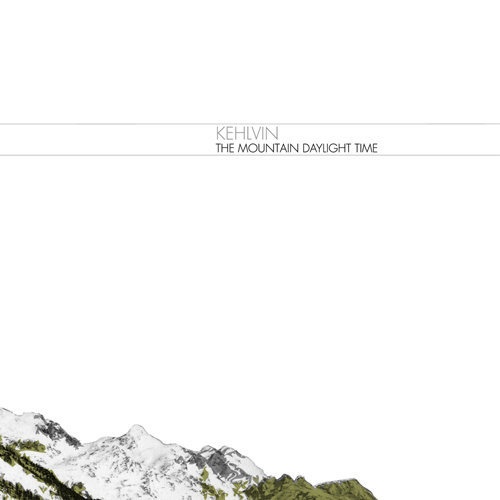 Forget all you’ve been told

This is not a game

Down with your knowledge

Why has it become so hard?

They can wake up the sun

No one keeps it inside

Bet on the stronger

Because passion is now my religion

Set off the force

I hear you screaming

This song was inspired by Rousseau’s theory that men were happier without the emergence of science (and art). I found the idea original and I decided to put it in a song, but as you can see, it’s all very naïve! The vocabulary is quite simple and the song does not go anywhere, there’s no real progression, and some parts have clearly been written more for the sound of words than their meaning… Come on, “They can wake up the sun” wtf??? At that time I was starting to put more meaning in my lyrics, but obviously the sonority of the words still was still more important!

This was also a moment in my studies when I was discouraged by the huge amount of work I had and was craving the bliss of ignorance! I’m an anxious person and always thinking, ruminating…  so when I talk about “unchaining ourselves”, it’s about getting rid of the chains of knowledge, letting go and forgetting some things in order to be happier. 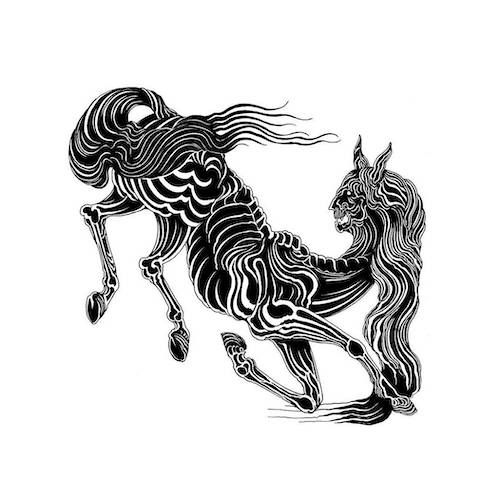 A static marble woman in a graveyard

With a strangely expressive face

As she follows him home with her eyes

As he constantly goes back to her

The statue slowly turns in a goddess

The first signs were almost invisible

But they were there, she moved

They learn to communicate

Toward the flower’s smell

Through vanilla scent, he trains her

One night, everything falls in place

The statue eliminates its mortal rival

And a new bloodbath happens

The joy of love dies right away

As he stands alone in front of her,

Soaked in the blood of his lover

This tale is about a gardener working in a graveyard. He feels something strange about a marble statue, and slowly he understands that the statue is alive. He then starts communicating with her with flower smells and trains her to kill using vanilla scent. He leads the statue to kill his wife and for a while he’s happy with his new girlfriend. But one day he finds her dead, atrociously mutilated in a pool of blood. We learn that she has been using a vanilla soap in the shower, and it’s suggested that the statue was actually in love with the gardener and that her second crime was pure jealousy!

I’m really proud of the lyrical narrative here. Every word was carefully chosen in order to paint a vivid picture of the tale. I think it does justice to the original material while adding some of my own interpretation (especially the jealousy aspect).

First I would like to thank you, it’s an honour to have the opportunity to talk about my writing process, the truth being that nobody gives a fuck about it usually (even some of my band mates!).

Then, while answering, I came to realise that it’s really a personal pleasure to write lyrics as, except for Muladona, I’ve never released them.

When I think about the huge amount of time I spent writing them, and the fact that almost nobody is able to understand them when I scream, I think I must be a little bit obsessed… but I am still proud of what I’ve achieved, and again, writing those answers made me  appreciate how much I’ve evolved. It was a pleasure to take time to reflect and write about this, so thank you again!

One Response to “WAXING LYRICAL: RORCAL”