If you’ve been paying attention, this is the second time this month when we’ve mentioned the name Bornyhake. The first time was when we premiered a song from the new album by Borgne (here), the Swiss band that he began in the ’90s as a solo project. Today, the subject is another one of this prolific musician’s musical endeavors, a solo black metal project that bears the name Enoid.

Enoid’s debut album appeared in 2006, but already an eighth full-length has been readied for release. Entitled Négation Du Corps, it will be ushered into the world on March 20th through the combined efforts of Satanath Records and The Ritual Productions, and today we’re presenting a ravishing track from the album named “Je ne volerai plus dans les cieux“. 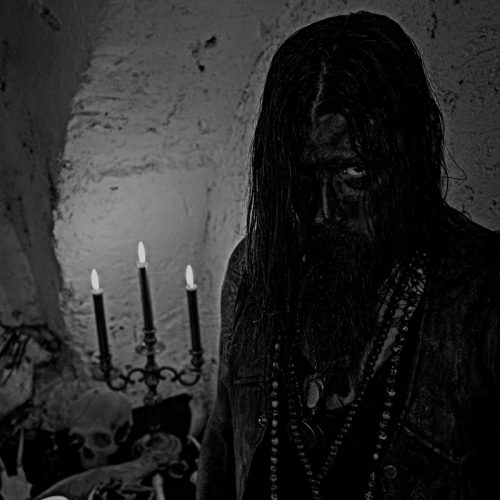 It is fair to say that Enoid disdains much of the progression that has marked black metal in the modern age, clinging instead to the intensity, the vitriol, and the utter misanthropy that marked the early ’90s. One glance at the frightening cover art for the new album (by Maxime Taccardi) makes that clear, and not for naught does Satanath recommend the album for fans of Gehenna, Mayhem, Darkthrone, Shining, and Tsjuder — but also drops names such as Setherial, Martyrdöd, and Wigrid.

The song we’re presenting today is full-throttle ferocity, a torrent of hammering drums and gale-force riffing that radiates the heat of searing flames. There is a sweeping and soaring quality to the ravaging riffs and flickering leads, which envelop the senses and immerse the listener, but also a feeling of implacable ferocity and venomous cruelty (which are qualities shared by Bornyhake‘s vocals).

It would go too far, however, to claim that the song is so enraged and violent as to be bereft of melody or nuance. When the full-throttle pacing relents near the end, the song becomes especially bleak and cold, but even in its fieriest moments there are inescapable moods of anguish and despair that come through.

Satanath Records and The Ritual Production will release Négation Du Corps in a jewel-case CD edition of 500 units, with an 8-page booklet. In addition to pre-order and other info about the album available through the links below, we’re also including a stream of the previously released track “Est-ce mon corps? Est-ce mon visage?” (a free download at Bandcamp), along with today’s premiere.