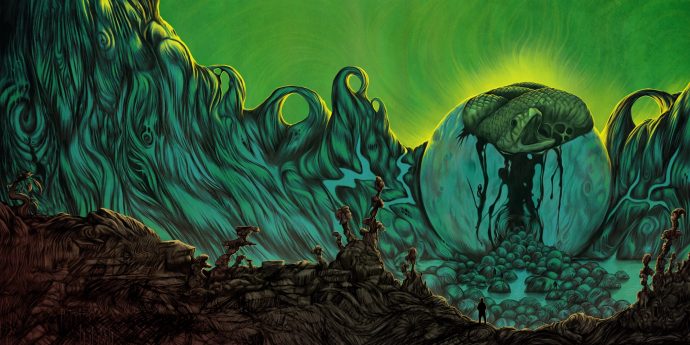 (In this SYNN REPORT for the month of February 2020, Andy Synn assembles reviews of all the records released to date by the Swedish band Yuri Gagarin, including their new album, released in late January.)

One of the many joyful elements of writing each edition of The Synn Report – beyond the simple pleasure of being able to introduce you all to new artists and albums every month – is the way in which it encourages me to switch up my listening habits on a regular basis.

Case in point, after going from Tech to Grind to Death to Black to Prog to ‘core over the last six months now it’s time to switch things up once again with Space-Rock cosmonauts Yuri Gagarin.

Despite hailing from the metallic mecca of Gothenburg, Sweden, the five-piece are probably one of the least “Metal” artists we’ve ever featured as part of The Synn Report.

However that doesn’t mean they don’t bring their own particular style of heaviness to the table, adding a delicious dose of distortion to every juicy, psychedelic jam and fuzzed-up instrumental freak out. 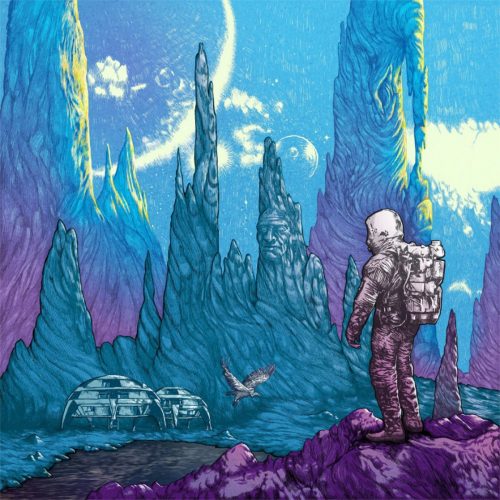 The band’s eponymous debut (the version below is the 2014 remix/re-release, FYI) sets out their stall pretty quickly, beginning with the  riveting “First Orbit”, whose opening samples and synthetic atmospherics soon give way to a shamelessly swaggering display of acid-laced riffs and splashy, loose-limbed drums, all topped off with some intricately indulgent lead melodies and underpinned by an ever-present aura of cosmic background radiation.

“Sonic Invasion 2910” is all about guitarist Jon Eriksson, bassist Leif Göransson, and drummer Stefan Johansson locking together seamlessly and setting the stage for their colleagues, Robert Klockerman and Christian Lindberg, to freak-out/show-off on synths and lead guitar, respectively.

It’s a real pulse-raiser, which keeps on pushing and moving forwards for the full seven and a half minutes, with only the occasional moment where the band ease back a little to allow their third eye to open wide.

Somehow the second half of the track gets even groovier, largely due to drummer Stefan Johansson cutting down his bpm to an even more trance-inducing pace, before the whole thing finally culminates in a spine-tingling finale of mind-warping synthscapes which practically begs the listener to give the whole thing just one more spin. 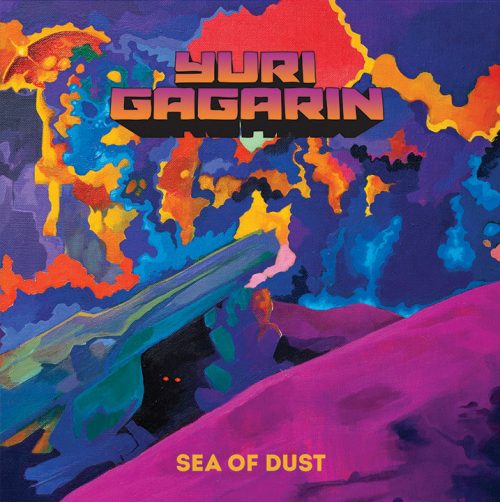 Less of a stop-gap and more of a primer for the band’s next release, Sea of Dust demonstrates that, in just two short years, Yuri Gagarin had already developed their sound and style significantly.

Both tracks on this EP are bigger, bolder, and, perhaps even more importantly, tighter than those on their debut, resulting in the paradoxical effect where they feel even more immersive and captivating, despite being shorter and more succinct overall.

The title track is six and a half minutes of hazy, distorted riffage and slithering, sandworm bass lines overlain with whispering melodies that sweep across the track like shimmering solar winds, all building to a thrilling conclusion.

And, speaking of thrilling, “Psychological Discontinuity” might just be the band’s heaviest track so far, the bass, drums, and rhythm guitar immediately locking into a mighty Stoner-Metal groove reminiscent of Sleep or Monster Magnet (or, going back even further, possibly even the proto-Metal swagger of Hawkwind) while the lead guitar flexes its melodic muscles in an almost stream-of-consciousness style. 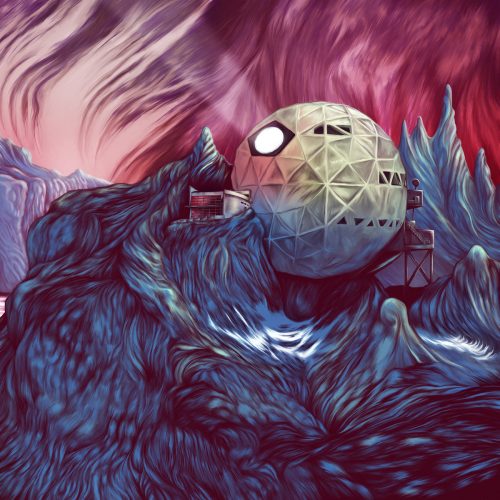 At the Center of All Infinity picks up pretty much where Sea of Dust left off (not really a major surprise, considering there’s only a few months separating the two releases) by continuing to showcase the band’s increasing energy levels and larger sonic presence.

On opener “The New Order”, for example, the synths are more layered, the drums that little bit more complex, and the band’s willingness to switch up (or down) a gear now and then is just that much more pronounced – especially near the end where they slow things right down to give the track the moody, minimalist ending it deserves.

“Cluster of Minds” revels in dense, distorted rhythm riffs and thick, muscular bass lines, giving it an almost High On Fire-esque flavour (albeit with a far greater love for trippy ambient synths and soaring melodic lead lines – with Lindberg putting in some of his proggiest and most poignant work yet during the song’s second half), while “In the Abyss” doubles down on the proggy psychedelia – the opening minutes are pure Oranssi Pazuzu – before finally bringing the heavy in the form of some periodic passages of fuzz-drenched power.

After the various thrills and spills of the preceding three tracks “I See No God Here” offers a momentary breather of sorts, bathing the listener in sparkling, slow-motion synths, before the massive title track – again, think Hawkwind after they’ve been dropping acid and chugging rocket fuel for a few days – pumps up the volume and amps up the distortion to epic levels.

Phenomenal final track, “Oblivion”, is, if anything, even more epic than its predecessor, with Lindberg absolutely cutting loose on lead guitar while his colleagues and co-conspirators lock together into a truly gargantuan groove (with some seriously bombastic, Black Sabbath-esque moments here and there) overflowing with hazy melodies and humongous hooks (not to mention some utterly superb synth work). 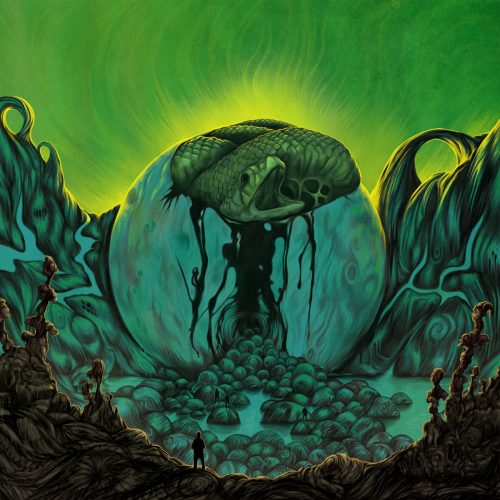 The band’s third album, released at the very end of last month, takes them another step towards a punchier, more metallic sound, without abandoning the spacey, stargazing vibes or immersive, introspective aspects of their sound in the process.

It’s still a hell of a trip, mind you, but definitely errs more towards a bad trip this time around – one where your blood is pounding through your veins and all the colours are beginning to bleed together into one dizzying galactic spiral – right up, that is, until the final few minutes of the track, where everything evens out nicely in sublime, soothing style.

As unexpectedly dark and challenging as the previous song was, however, “Oneironaut” finds the band pushing things even further, resulting in what is easily their longest, most intricate, and most demanding track yet. And quite possibly their best too.

For just over thirteen-and-a-half minutes Yuri Gagarin take the listener on a journey through space and time – all without leaving the comfort of their own home. The moody first half of the track is a simmering slow burn, heavily engorged with nascent possibility and potent potential, which stokes the anticipation, minute by minute, to an absolute fever pitch, so that when it finally blooms into life, the drums going hell for leather, the guitars spiralling off into infinity, the synths cascading over one another like rays of lambent light, it’s practically impossible not to get swept up and carried along for the ride.

Clearly understanding that their audience might need a moment to collect themselves after the OTT excess of “Oneironaut”, the band then opt to slow things down a bit with the doomy radiance of “Crystal Dunes” (which might just be my favourite track on the album).

The song’s pace may be slower, but it’s actually just as intense in its own way, with a central lead refrain that’s as mesmerising as anything the band have ever done. The mid-song switch to a more ambient, atmospheric approach also works brilliantly to give everyone (the band included) a momentary breather, after which it comes back even bigger and better than ever.

I’ll grant you that the infrasonic sub-tones of “Laboratory 1” don’t necessarily work as well as some of the band’s previous interludes, but thankfully the reckless gallop of the title track more than makes up for this with eight-and-a-half minutes of raucous riffology and fearless lead guitar flair.

What really makes it work, however, are the shining synthscapes provided by Robert Klockerman, who weaves his mellifluous magic into the fabric of the track from beginning to end, transforming it into an an epic, astral journey that serves as a fabulous finale for the record.