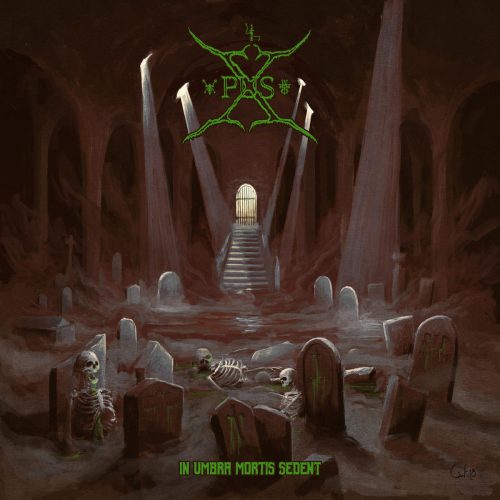 Roughly four and a half years after the release of their debut album Sanctus Dominus Deus Sabaoth, the Italian death metal band Xpus are rising up again from their dank and poisonous catacombs to deliver a blasphemous new portrayal of discord and death. Their new album In Umbra Mortis Sedent draws upon sinister and slaughtering old-school traditions established through the wickedness of such bands as Morbid Angel, Deicide, Incantation, and Sinister, but Xpus have used these antecedents as foundations for putting their own distinctive mark in the annals of death metal with a black and heavy hand.

Compared to their first record, the new album reveals a significant advance in songcraft and execution. For want of a better word, the music sounds “immense”, not merely in the ravishing power of the sound but also in the harrowing atmosphere of looming supernatural menace and terrifying savagery that it creates. It’s tempting to use the word “majestic” to characterize these pitch-black sensations, but if there is a throne in sight within the band’s creations, it’s an edifice of skulls brutally severed from the spines of the tortured. 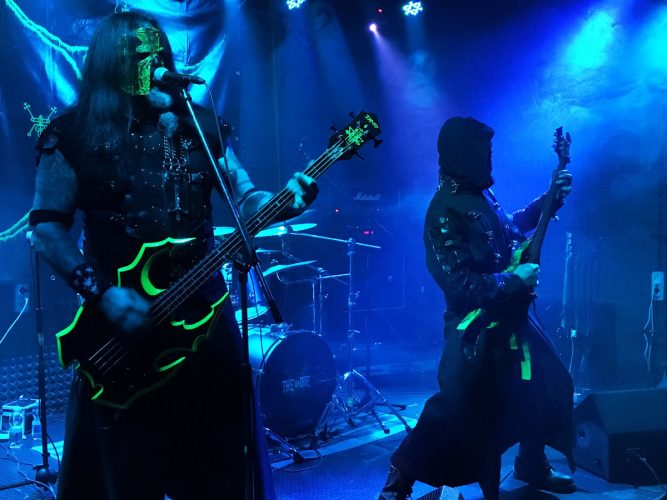 The song we’re presenting today is fittingly called “The Gates of Doom“. As alluded to above, it’s grandiose and preternatural. Heaving and stomping in its initial momentum, the music also ravages when the drummer begins blasting, the guitars roil and blaze in a demented fever, and the vocalist makes his own assault in an imperious growling roar.

The song’s initial pulsing riff has a magnetic quality that ties the song together, creating an ominous and oppressive aura, and although the track doesn’t last long, it’s long enough to get stuck in the head like an iron spike being relentlessly driven deep.

You can check out two more tracks in the Bandcamp player we’ve installed below, “Blood Rite of Liberation” and “Holy Sperm Upon the Lambs“. They further demonstrate the formidable talents of Xpus in creating persistently dynamic music of electrifying cruelty, monstrous heaviness, and searing misery, all of it operating on a grand scale. These songs also prove the extent of the band’s sure-handed songcraft by incorporating emotionally devastating melodies with a very human appeal in the midst of frighteningly inhuman assaults upon the senses.

Misanthropic Art created a great cover for the record, and the packaging also includes a glow-in-the-dark effect. The album will be released by Transcending Obscurity Records on April 24th in an 8-panel digipack CD edition, and digitally (and one of the CD editions is an autographed box set limited to 75 copies). There’s other merch related to the album that’s also available, and you can check out all of it via the pre-order link below.

One Response to “AN NCS PREMIERE: XPUS — “THE GATES OF DOOM””