As we’ve been reminding you for the last three days in a row, on March 16th Unspeakable Axe Records will deliver a spectacular split release that harnesses the talents of four hellaciously good death metal bands. The last time Unspeakable Axe did something like this was in 2016, when 4 Doors To Death brought together tracks by Cemetery Filth, Ectovoid, Sabbatory, and TrenchRot (check that one out over here if you haven’t already). This time, under the title 4 Doors To Death vol. II, the label is presenting a combination of 12 original new tracks by Nucleus, Ectoplasma, Fetid Zombie, and Temple of Void, amounting to a solid hour of ferocious and frightful metal.

Three days ago we began the roll-out of one track from the split by each of these four bands — one per day. If you haven’t checked out the Nucleus track we brought you on Tuesday, the Ectoplasma song we revealed on Wednesday, or the Fetid Zombie song we premiered yesterday, do that here, here, and here.

And now the time has come to wrap up this series with a song by the fourth band on this split, the Detroit doom-death titans Temple of Void. 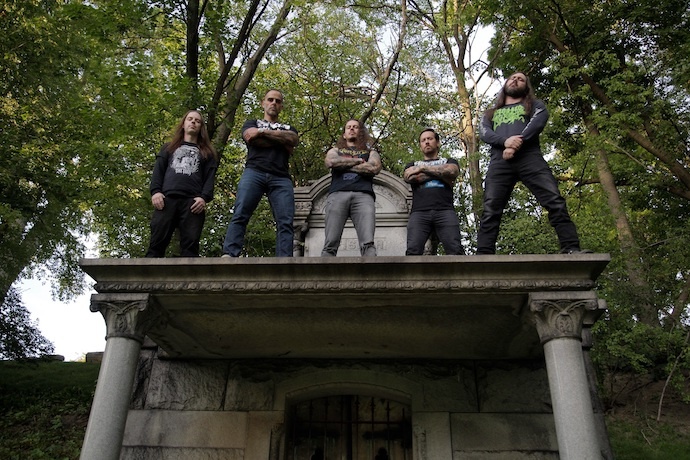 The release of this new split is auspicious timing, because Temple of Void also have a new album coming our way. Following up on their tremendous second full-length, Lords of Death, in 2017, which in turn followed a jaw-dropping debut in 2014’s Of Terror and the Supernatural (both of which we showered with praise), these Detroit death-dealers will release a third album entitled The World That Was on March 27th (via Shadow Kingdom Records).

But before that new album hits the streets, fans of Temple of Void will get three new songs by them on 4 Doors To Death vol. II, and you won’t find those anywhere else. The one we’re presenting today is the track that closes the split, and its name is “Ceremorphosis“.

The combined sensations are abysmal and oppressive, but a shifting of gears lies ahead. Momentous booming drums and searing tremolo’d chords provide the prelude to a neck-wrecking new riff as the band step on the accelerator, the bass pulsing, the lead guitar quivering in a frenzy, and the drumwork thudding and clattering in compelling fashion. And thus the song becomes a ravager, as well as ghoulish and hopeless.

Unspeakable Axe Records will release the split on CD and digital, with 4-panel art by the famed Mark Riddick. Pre-orders are available now via the link below.