Yesterday we began the roll-out of one track from the split by each of these four bands — one per day from now through the end of this week. If you haven’t checked out the Nucleus track we brought you yesterday, what the hell are you waiting for? Do that here. And then scurry right back to this page to take in the mutilating marvels of the song we’re presenting today — “Infestation of the Extraneous Ones” by the Greek death metal band Ectoplasma. 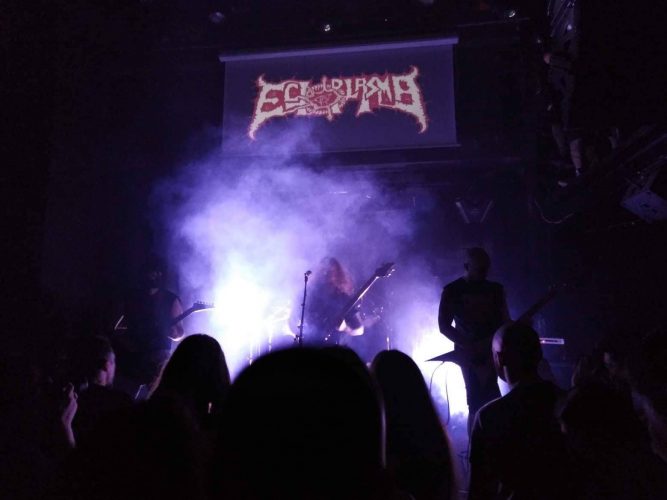 Like Nucleus, Ectoplasma released a tremendous new album in 2019 (their second full-length). As we wrote then: “Ectoplasma are devoutly dedicated to the old foul, fetid, and ferocious sounds, rooting their music in early ’90s death metal from both sides of the Atlantic, but also injecting it with a black magic devilry of their own conception. Paranormal horror has played a significant role in the band’s inspirations, and that fixation persists in this new album, White-Eyed Trance, a concept record organized around lyrical themes threaded through the songs”.

Over the course of the album the band repeatedly proved themselves capable of creating music that is moody and magical as well as cruelly frenzied, perniciously poisonous, and horrifying ghastly, demonstrating not only impressive songwriting talent but also technically impressive execution. It was thus very exciting news to see that Ectoplasma had contributed four tracks to this new split.

The most wretched and terrifying screams begin the one we have for you today, “Infestation of the Extraneous Ones“, and those horrific sounds of fear and torture persist even after the band explode onto the scene. And what they do truly is explosive, delivering a blazing discharge of hyper-blasting drums, maniacal fretwork, and shrieking string mutilation. It’s an undeniably vicious attack, but it’s just softening up your skull for what comes next.

Following an ominous bridge of grumbling bass notes and titanic drum detonations, Ectoplasma launch a brutal bout of barbarous jackhammering and circle-saw evisceration, and lace it with monstrous roars, ghastly shrieks, and freakishly swirling leads. They continue blending together neck-ruining grooves and rabid riffing in electrifying fashion, driving the listener’s pulse rate to even greater heights before letting you catch your breath when the song suddenly stops.

Ectoplasma is a name that should be on a hell of a lot more lips than it is, and hopefully the four tracks they’ve contributed to this new split will help spread the word further among death metal addicts, because they are really, really good at what they do.

Unspeakable Axe Records will release the split on CD and digital, with 4-panel art by the famed Mark Riddick. Pre-orders are available now via the link below. Check back with us each remaining day this week for two more premieres from the split.