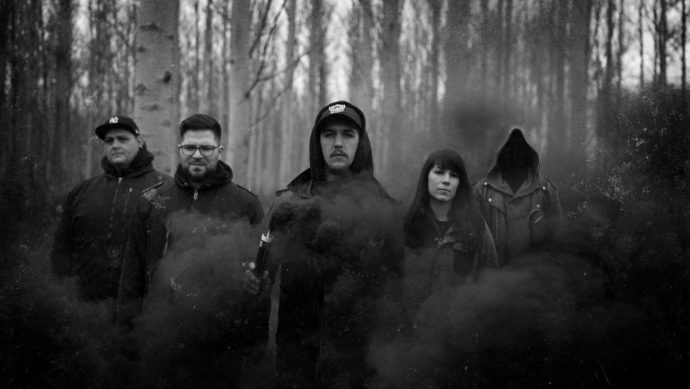 The first item I selected is a new video for a new song by the Hungarian band Witchthrone, whose music has both post-metal and black-metal elements. Entitled “Shallow“, the song is one of four on their self-titled debut EP, which is set for release on March 20th.

Part of the video is a disturbing narrative about a man in ruins (both literally and figuratively) who seems to begin digging his own grave, shadowed by a hooded figure and a looming noose. Interwoven with that are flashing images of the band throwing themselves body and soul into the performance of the song.

The song itself is as intense as the performance. Anchored by sludgy bass tones and vibrantly clattering drums, the song seethes and jolts as the vocalists violently scream and roar. The melodies have a bleak and despairing quality, the riffing both gloom-shrouded and feverish. There’s also a beautifully fluid and melancholy guitar instrumental at the end, which I wish had gone on longer.

One other track from the forthcoming EP is also out in the world, also accompanied by a well-made (and disturbing) video, and I’m including that one too. “Circle” is its name, and it’s another hard-hitting, emotionally intense, almost anthemic track. 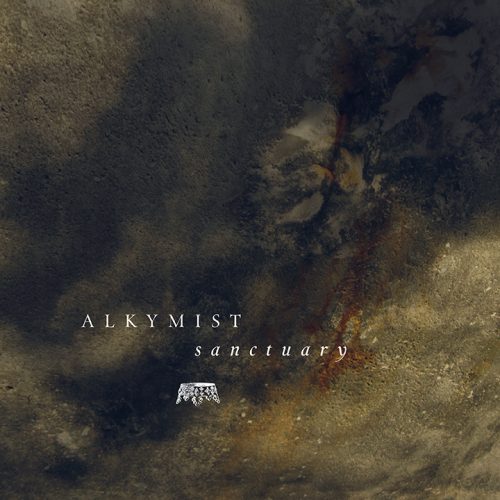 This next song is one I mentioned at the outset that isn’t black metal — progressive doom is the way the band describe their music — but it struck me as at least a close cousin. And besides, I’ve fallen so hard for the song that I didn’t want to wait any longer to write about and recommend it.

The band here is a Danish group named Alkymist (there’s a Canadian black metal band named Alkymist, but this isn’t that). They have a new album (their second) entitled Sanctuary that will come out on May 1st via the Indisciplinarian label. The first single from the album, “Draugr” (named for an old Norse wraith), was released on Friday the 13th, and that’s the one that got its hooks in me so deep.

What hooked me first about the song was the vibrant drum progression that kicks it off, backed by slashing chords and then a gravel-chewing bass line. The music has a dark and febrile quality, and the bellowing and howling vocals are electrifying. Eerie flickering and wailing leads emerge that give the music a chilling quality, but the drum and bass work continue to give it a riveting physicality. Eventually the song becomes oppressively dismal in its atmosphere, grinding its iron-shod boots into your neck, and the  gleaming sheen of the leads feels hopelessly desolate. 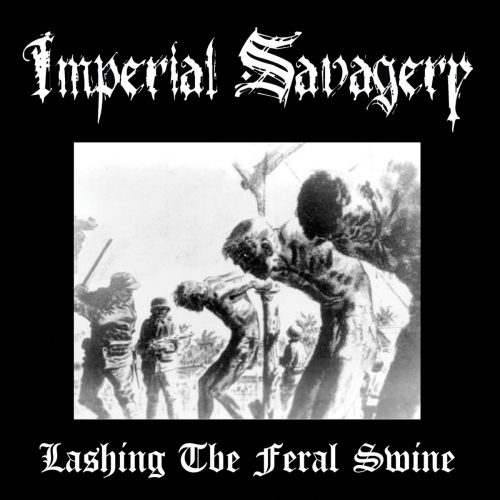 This next track isn’t precisely black metal either, but more a melding of evil death metal from the ’90s and early black metal. It’s off a forthcoming album named Lashing the Feral Swine by the Chicago band Imperial Savagery, whose line-up includes current or former members of a long list of notable bands — CorpseVomit, Lividity, Gigan, Kommandant, Envy The Dead, The Everscathed, Enmortem, Nachtmystium, Evil Incarnate, and Sons Of Famine. The album is recommended by the releasing label for fans of Immolation, Angelcorpse, Deicide, Venom, Bathory and Hellhammer.

“From Advent to Casket” is immediately a warlike surge of rampant, roiling chaos, all blasting drums, maniacal riffing, and murderous howling vocals. It’s a thrilling way to begin, but the music becomes even more thrilling as the band start rhythmically jabbing at your neck, sending off swirling melodic fanfares, shifting gears into quivering facsimiles of gibbering lunacy, and creating guitar-solo fireworks. Want more!

Lashing the Feral Swine will be released on April 24th by Horror Pain Gore Death Productions. 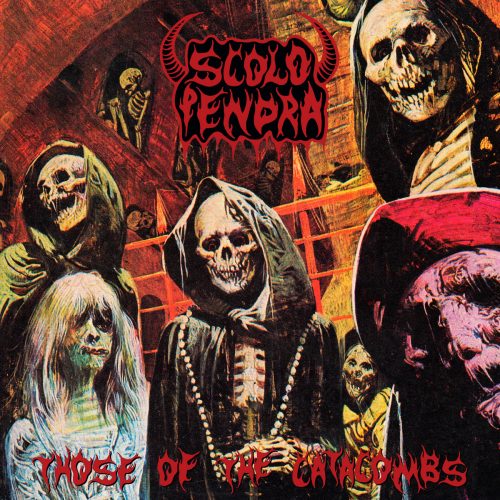 I don’t know much about Scolopendra. I see that there is a French band by that name on Metal-Archives, but this one is described on Bandcamp as “Italian horror death metal with members of Abhor” — and yes, this is another entry that doesn’t neatly line up with this column’s black metal focus. But I think when you hear the first advance song from their album Those of the Catacombs you’ll understand why I included it.

“Priest’s Blood Soup” is a full-throttle romp that includes goblin-like black metal vocals, vertebrae-cracking drumwork, and scything tremolo’d savagery, but the music pulls from multiple heavy metal traditions, bringing into play smashing rhythmic chords, ghoulish serpentine melodies, and completely freaked-out soloing. And you’d better get your neck muscles loose before you hit the mid-point, because Scolopendra are about to turn the song into a ticket straight to headbang city as a prelude to a gloriously demented climax — with a creepy finale that earns that reference to horror metal.

Those of the Catacombs will be released by Nuclear War Now! Productions on May 31st. 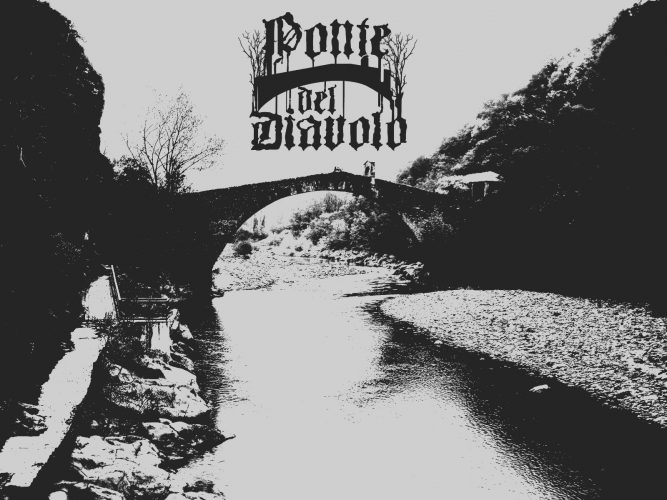 I’ve forgotten how I came across Ponte Del Diavolo, but like everything else in today’s collection the two songs they’ve released so far have gotten their hooks in my head, and in their case unexpectedly so.

The band is new, having just formed over the past winter in Turin, Italy — “born from a jam between members of Feralia, Inchiuvatu, Abjura, Askesis“. They describe their sound — quite accurately — as a blending of occult rock, doom, and black metal. Along with guitar and drums they use two basses for extra weight, and their vocalist is a woman (who goes by Erba del Diavolo). Their debut EP Mystery of Mystery / Secret live session was recorded live and without editing.

So far they’ve put two songs from the EP on YouTube. The drumming in “Mystery of Mystery” hammers and then rocks, the grim and gloomy riffing gouges and growls, and the bass provides a gut-punching heaviness. The riffing gets narcotically woozy, and Erba‘s wailing vocals create a blending of psychedelia and black-magic witchiness. The song creates an occult atmosphere but is also a definite head-mover (as are the repeated incantations in the vocals), and it’s fascinating in its interweaving of musical styles.

“The wickedest woman in the world” is the second song. It employs the same alluring blend of musical ingredients, but with a kind of lurching, off-kilter rhythmic momentum — before it leaps into a hurtling blackened race. Erba‘s vocals are hallucinatory, and then seem wicked as the song itself becomes more sinister and savage. The music seethes like poison at a boil when the drums cease, and that feeling of menace and plague persists even when the rhythm section start moving your head again and Erba‘s voice segues into an exotic-sounding chant, like a Babylonian priestess in the throes of possession.

I haven’t discovered how or when Ponte Del Diavolo plan to release their EP. We’ll have to follow them on Facebook to find out.

When you begin listening to this next song you’ll probably think it’s not black metal either. Be patient… you will eventually hear the influence of black metal… but it’s only one of the ingredients in this intriguing track.

The band here, Dekira, is a three-piece outfit based in Raleigh, North Carolina, and this song — “Shackled by the Hands of the Shepard” — is a single from their forthcoming debut album Ominous Prophecies.

The trilling guitar instrumental at the outset of the track seizes attention immediately — and then the song begins to bounce and chime before delivering bursts of rambunctious drumming and scissoring fretwork. The drum rhythms remain in constant flux (and it’s a razor-sharp performance) while the character of the melodies repeatedly changes as well. The vocals are scorching, and definitely in the vein of black metal, but at times I got flashes of Thin Lizzy and Iron Maiden in the music.

In the song’s mid-section, the vocals become rasping whispers accompanied by a moody solo guitar instrumental, and the changes persist when the energy of the song ramps up again for a final surge, which channels torment and loss.

Dekira are looking for a label, so Ominous Prophecies doesn’t have a release date yet.