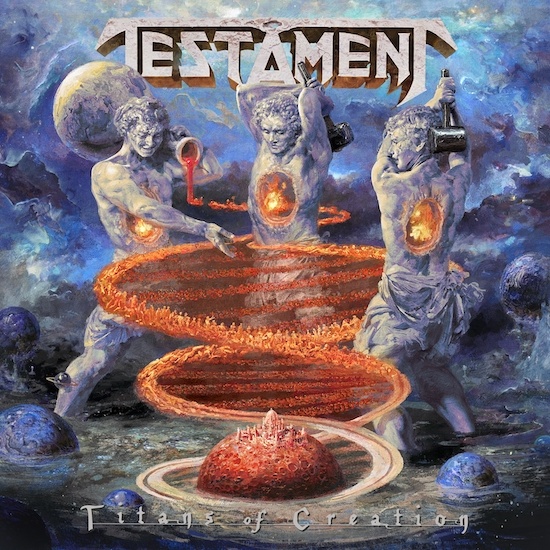 The half-witted editor of this site (that would be me) didn’t realize until this past weekend that Wil Cifer had sent in this review a week ago. And thus it is purely a coincidence, and a very sad one, that it’s now being posted the day after we learned that Chuck and Tiffany Billy and members of Testament’s crew have tested positive for COVID-19, apparently contracted during the band’s recently completed European tour. Members of their tour-mates Death Angel and Exodus have also tested positive for the virus. We wish them all the best under these unfortunate circumstances. Titans of Creation will be released on April 3rd by Nuclear Blast. And now, on to Wil’s review…

Testament lurk just outside of the “Big 4 “ but, The Ritual aside, they have held their own against Slayer over the years when it has come to putting out quality heaviness. The New Order might have been the metal album of 1988. That year had some tough competition, so at least in the top five. The first song on this album, “Children of the Next Level”, feels like it is fueled with the same fire that propelled their glory days. 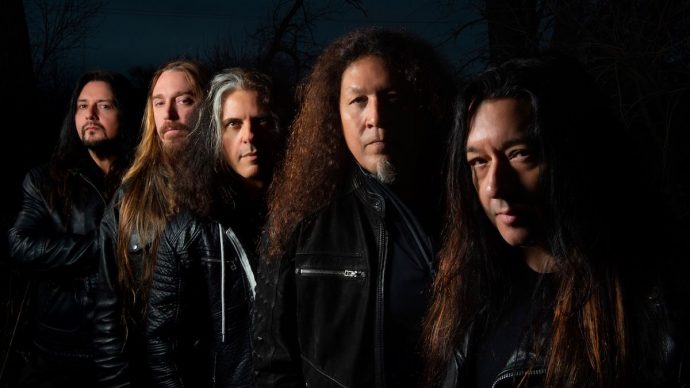 This might not be the original line-up, but with Steve DiGiorgio and Gene Hoglan on tap it’s a line-up that should please even the pickiest fans, if not an upgrade.

They fire back with more melody on “Dream Deceiver”. Chuck Billy’s voice sounds great, considering he is not getting any younger. The aggressive snarl and lyrical content on the lead single from this album, “Night of the Witch”, remind me of “Envy Life”. Is “Night of the Witch” as good as that song? Um, no, but it’s pretty solid and the meanest song on the first half of the album. One thing I have always appreciated about this band is how naturally they can balance hooky melodies without having to compromise their heaviness.

By ”City of Angels” it sounds like these guys might be the best assemblage of metal musicians in one band today. Skolnick shines as expected, not only shredding but delivering solos that make sense in relation to the song. This song also really showcases Steve DiGiorgio‘s playing. He has chops but is very melodic and nuanced. Producer Juan Urteaga really captured excellent tones all the way around. The guitars crunch and the machine-gun cadence of the double-bass is close to perfect.

They gallop with a vengence into their more classic sound on “Ishtars Gate”, the vocals pulling this one together. The guitar riffs on “Symptoms” might lean further toward the technical side than what I typically think of this band being, but they balance it with more hard-rock elements.

“The Healers”‘ has a lot of groove, almost Judas Priest-like. The vocals pretty much seal the deal. “Code of Hammurabi” did not grab me on the first listen. On second listen it’s more of a guitar-focused song, with Chuck Billy spitting out the lyrics in a more aggressive and straightforward manner. They thrash out more on “Curse of Osiris” — it comes together on the chorus. “Catacombs” is just an outro that seems kinda unnecessary.

Not sure this is better than any of the first four albums, but it’s a polished addition to their catalog that will not only appeal to long-time fans, but is sure to inspire sudden head-banging. When a band with (no pun intended) a legacy like this one releases new material, there is a desire for the sense of nostalgia to be preserved while not hearing a rehashing of the glory days in terms of originality. This album upholds that delicate balance and will not sound out of place on shuffle mode amid today’s metal. Not sure what else you could ask for from these guys.

10 Responses to “TESTAMENT: “TITANS OF CREATION””