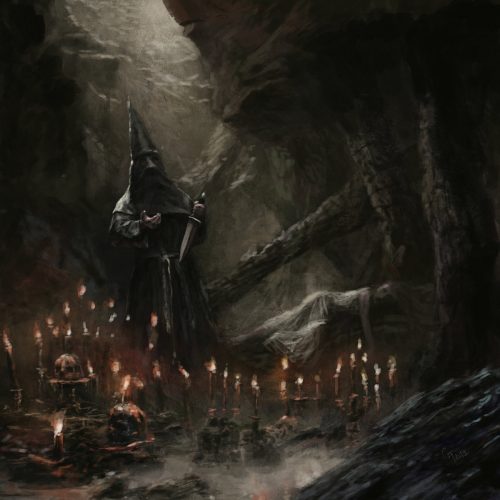 I first encountered this Italian band in 2017, following he release of their second EP, Unstinted, Delirious, Convulsive Oaths, whose sound I described as the feeling of being pursued by wolves in the dead of night: “Across all the changes in tempo, the atmosphere is pitch-black and ice-cold, and traces of dissonance in the hopeless melodies heighten the sense of frightening peril at your heels and sinister, supernatural forces at work on your mind. And the vocals are as ugly as a sin you’ll never purge”. 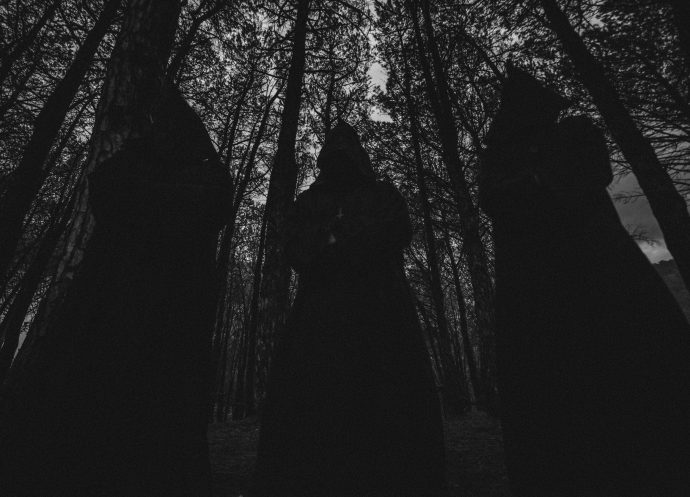 The occasion for revisiting Prison of Mirrors today is a song that has been revealed from a new album named De Ritualibus et Sacrificiis ad Serviendum Abysso, which the Icelandic label Oration Records will release on June 15th. That song, “Sigils for the Ritual Exhumation“, is a stunner.

At roughly 11 1/2 minutes long, it gives the band plenty of room to maneuver, and enough time to thoroughly captivate and bind the listener with esoteric chains. Ritual drums and chants coupled with poisonously squirming guitar provide a prelude to a bout of blasting snare and dense, roiling riffery, matched with terrifying vocals. Malice and madness emanate from those sounds like a radioactive discharge. Strange peals of anti-melody flare out, building both tension and a frightful sense of unearthly energies at work, especially when the drumming becomes less manically pulse-pounding.

The song vividly succeeds in making the listener feel as if they’re becoming part of the infernal possession under which it seems the band have created the music. Even when the sound subsides into the renewed tumble of ritual drums and the re-emergence of stately (but scary) chants, reverberating as if the voices were raised beneath the rib-vaulted ceiling of a Gothic cathedral, the music is eerie and ominous, candle-lit and blooded. The song becomes majestic, but laced with the sounds of punishment and pain.

This one song should very quickly put this album high on people’s most-anticipated lists.

Sigils… was recorded at Sonic Temple Studio, Italy, and was mixed and mastered by Stephen Lockhart at Studio Emissary, Iceland. The eye-catching cover art was created by Khaos Diktator Design. 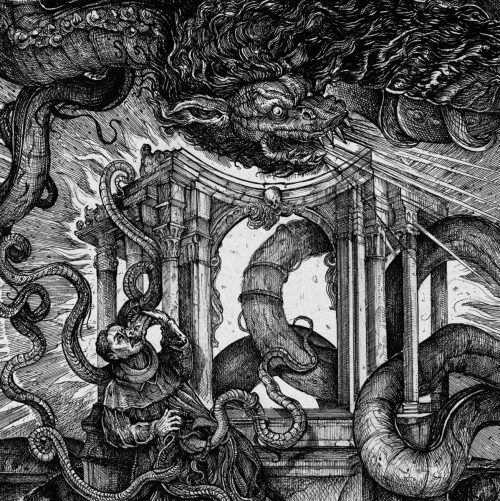 When I was first directed to this debut album I was simultaneously struck by the amazing cover art created by Pierre Perichaud (Business For Satan) and by the unusual and intriguing album title: That Which Whets the Saccharine Palate. The music proved to be damned striking too. But before we get to that, here’s the complete cover art, which is included as a poster with the CD release: 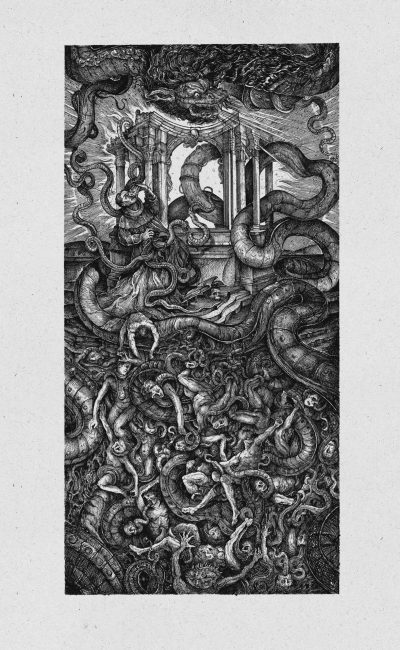 The album begins in mid-paced fashion with the opening of “Fecund Godhead Deconstruction”, and demonstrates both clarity and evenness in the mix, allowing a bright and alluring guitar melody to unfold over hefty bass and head-moving drums, but the music soon becomes more ravishing, the melody more dissonant and distraught, the bass more imperious in its sound. And then the song really kicks into high gear with freakishly jittering fretwork and full-tilt drum battering. Incinerating screams trade places with monster roars, and jolting chords interweave with all the increasingly crazed guitar acrobatics.

The high-flying instrumental acrobatics and flamethrowing vocal fury become a hallmark of the album as a whole, which venomously vents “disgust, contempt, and mockery for all of religion’s existential justifications” through head-spinning flurries of technically impressive black/death marauding. For those who get winded easily, you’ll be glad to know that Yaldabaoth do ease back on the throttle from time to time (the openings of “Gomorrahan Grave of the Sodomite” and the mid-paced “To Neither Rot Nor Decay” are but two fascinating examples), typically giving the music a darker cast but also providing the added benefit of making it a bit easier to focus on what all the intricate moving pieces of the music are doing. And although dissonance and derangement remain the principal order of the day, the band are generous in doling out powerful, hard-punching rhythms and recurring melodic motifs that help hold these extravagant musical adventures together.

It’s difficult to put into words just how much of a head-spinning thrill-ride these songs are, thanks to the performers’ top-shelf instrumental skill and the ingenious ways in which they’ve written these songs, bringing them to vibrant life as cohesive compositions notwithstanding the music’s persistent pyrotechnics and intricacy.

The album was co-released on February 27th by Lycaean Triune and Aesthetic Death. For those who may be familiar with the Brazilian black metal band Yaldabaoth, this isn’t that one. This Yaldabaoth hails from Anchorage, Alaska.

(Thanks to Rennie (starkweather) for directing me to this album.) 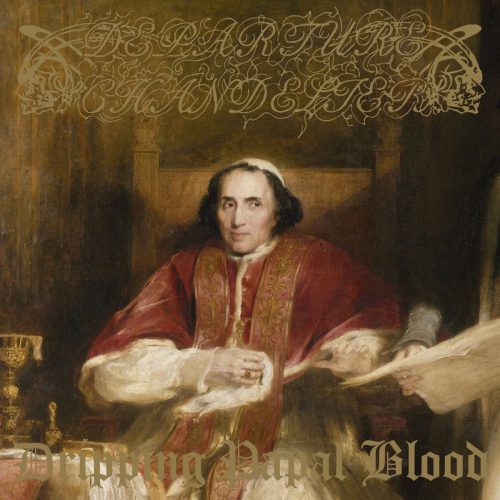 Departure Chandelier was a band whose members came from Akitsa and Ash Pool. Their first demo, Antichrist Rise To Power, was recorded nearly a decade ago, allegedly in a basement at grave-level behind the New York City Marble Cemetery (the oldest cemetery in New York City). The demo traces the life and death of Napoleon, envisioning him, and honoring him, as the Antichrist. Although the album was made long ago, it was only first released in February 2018 by Nuclear War Now!, and that’s when I encountered and wrote about it in another one of these columns.

Two days ago (with a premiere at DECIBEL) more music from Departure Chandelier was released, under the title Dripping Papal Blood. This was also recorded a decade ago as a demo, and like the first one was never released, until now. Again based on historical events, in this case involving the interactions of Napoleon and Pope Pius VII, but again envisioning Napoleon as the Antichrist, this demo “intrudes into the interplay and triple-crossing corruption between napoleon, the church and his own art plundering family members appointed through nepotism to the diocese”.

As in the case of the first demo, this second one is an elaborate and fascinating experience, one that succeeds in providing a compelling soundtrack to its portrayal of events, and never letting us forget that at the center of the conception is the ascendancy of the Antichrist. There are accents of classical and ancient music, but also harrowing vocals, assaults of ripping ferocity, and passages of heartless imperial grandeur and stately reverence. Even the unsettling opening and closing instrumental tracks are vital to the experience. I only wish there were more to be had from this project. But who knows, maybe there will be? 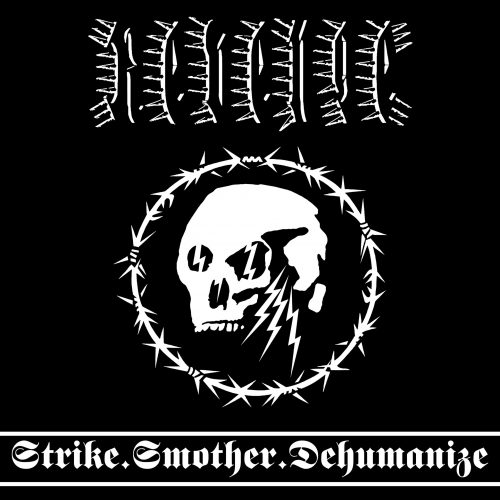 In line with their previously established habit of titling albums with three words separated by periods, Revenge have named their new album (the sixth in a 20-year career) Strike.Smother.Dehumanize. It’s being released by Season of Mist (their Underground Activists imprint), with a street date of May 22nd. The recording line-up again consists of songwriter J. Read (drums, vocals, effects) and Vermin (session guitar, bass, effects).

No one who has previously been repelled by the music of Revenge will have a change of heart about this new album. Anyone who has previously relished being overpowered by their brand of chaos black metal will become excited all over again As you could guess if you didn’t already know, I’m in the latter camp.

“Salvation Smothered (Genocide of Flock)” is what you can hear now, and although it does have portions of neck-cracking, rocking groove here and there, it hews closely to Revenge‘s amalgam of demonic shrieking and distorted crocodilian growls, blazing drum mayhem, and berserker fretwork discharges. For example, if I’ve heard a guitar solo more insane that the ones in this song this year, I’ve forgotten where.