From 1989 to 1994 Winter released only one demo tape (Hour of Doom), one album (Into Darkness), and one EP (Eternal Frost), and nothing since then. But those recordings were enough to cement their place in the history of extreme metal and to become the jumping-off point for countless other bands in the doom and sludge genres for the last 30 years. And thus when Svart Records announced weeks ago that it would be releasing an album by a band it characterized as “a long-awaited continuation of what Winter would have been”, I sat up and paid attention. 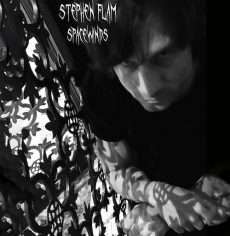 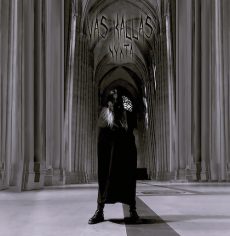 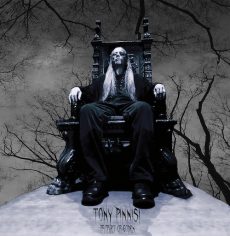 The name of the band is Göden, which also happens to be the name of a track on Into Darkness. The band consists of Winter’s co-founder Stephen Flam, lead vocalist Vas Kallas (who seems to be a member of Hanzel und Gretyl and Cycle Sluts from Hell), and keyboardist Tony Pinnisi, who also played in Winter. In the story told through their debut album Beyond Darkness, each of them plays a character — “Spacewinds”, “NXYTA (Goddess of Night)”, “The Prophet of Goden”, respectively. That musical narrative is accompanied by a visual story-book created by Slovenian multimedia artist Eva Petric within the LP/CD booklet, which also includes the lyrics. You can get a look at that HERE.

The music itself is described as “a conceptual deep dive into wildly unexplored and unknown sonic territory”. The track list is 19 titles long, though some of those are spoken-word pieces backed by eerie ambient music that prove to be integral to the unfolding of the tale within the album, but maybe not all that necessary to the experience of listening.

I think at one time this entire album was available for streaming at Göden’s web site, but that was disabled in light of Svart Record‘s signing of Göden for release of the album. There was one track still out in the world via YouTube (“Twilight“) when Rennie brought it to my attention two weeks ago, though I decided after I’d written everything above not to post about it at NCS because that song-stream was a leak.

But now “Twilight” has been officially released through the premiere of a trippy video at Invisible Oranges (which includes further info about how this album came to be). With growled and howled lyrics that are bitter and bleak, the music stomps and heaves, psychedelically wails and weeps, creating a mood of peril, oppressiveness, and pain, leaving wretchedness in its wake and a haunting feeling of disorientation. Crushing on multiple levels.

Svart Records will release Beyond Darkness on May 8th.

Top-shelf neck wreckage — a combination of feverish, blaring riffs, spine-cracking rhythms, and (of course) absolutely blistering vocals, effectively accented by synths. I’m going to say right now this will be on our list of 2020’s Most Infectious Extreme Metal Songs (but do I need to change the title of that list in our current age?).

Cool use of electronics in the opener “Winds of Dysphoria” before the lights-out drumming, viciously roiling, slashing, and pulsing riffage, and barbarian-at-the-gates vocals take over. With that huge adrenaline rush of a track as the launching pad, Vredehammer‘s latest album rampages through eight more tracks of high-octane, highly addictive, black/death metal, with well-placed segues into passages of grandiose atmospheric melody and further use of synth and electro accents to very good effect. The drumming steals scene after scene, but the rest of the band hold their own, creating a near non-stop powerhouse of turbine-driven bombastic sound.

Big question about which of these tracks will wind up on that 2020 Most Infectious Song list mentioned above (which will not be the first time Vredehammer have made one of those lists), but I’m confident one of them will.

The album is Viperous, and it was released by Indie Recordings on March 6th. Thanks to Lord Farin for nudging me to spread the word about this album.

Dismal and desperate, moody and magical, this is black metal with a strong melodic component that’s enthralling, and a rhythm section that eschew blasting and battering, creating a nuanced and compelling momentum for all the emotionally penetrating and beautifully layered guitar work and the vicious, roaring vocals.

“When Gold turns into Lead” is from The Womb of Zero, the debut album of this Finnish trio, composed of members of Behexen and Horna. To be released by Terratur Possessions on April 24th.

At the beginning, searing, depressive guitars, methodically booming and rapidly rumbling drumwork, and terrifyingly wrenching vocal screaming, and after that, a riveting sequence of changes which include eruptions of completely unhinged riffing and an even more unhinged drum assault (coupled with vocals that will blowtorch the skin off your face), as well as rocking rhythms and soaring streamers of desperate melody, plus bursts of blaring dissonance and mercilessly pile-driving and jackhammering drums. So fucking intense that it Left me slack-jawed and pop-eyed.

“Third Temple” is a digital single released by this Pittsburgh-based band on March 18th.

I put this song and video here as a kind of interlude, and it’s the only item in this collection that’s not new, though I just discovered it thanks to a link from Miloš. A completely mind-boggling combination of bizarre, mentally mutilating electronic manipulations of sound and measured, moody, crystalline vocals interspersed with rising, eerie, operatic wails. There’s a slow rhythmic beat, which adds to the trance-inducing aspects of the music — which are formidable — but it’s the contrast between those elements and the nightmarish quality of the others (including the chilling screams which eventually surface) that makes this creation so striking, and unnerving.

This song, “Mariyammal“, is the title track to a 2015 album by a project known as Duhkha. I’ll paste here the description of the record that I found at the first link below:

“Mariyammal is the first release by DUHKHA, a new collaborative project created and curated by Benjamin Bex. For this first opus, Bex recorded the mechanical sound machines of Pierre Gordeeff and the cello improvisations of Nathalie Ponneau, Camilla Sørensen and Greta Christensen contributed a soundtrack from their turntablism project Vinyl -terror & -horror and Yvan Volochine shared some real-time audio synthesis. Bex reworked and assembled those patiently collected sound pieces into a highly atmospheric puzzle, adding acoustic guitar, piano strings and his unmistakable voice.”

Heads will move and hearts will fall in the presence of this mid-paced black metal song, whose combination of grim guitars, spectral keyboards, and ugly serrated-edge growls creates a blood-freezing, horror-inspired atmosphere. The band do periodically shift into a higher gear, getting the blood pumping with galloping beats and pulsating riffs, but the main line of the song comes straight from a dank crypt.

“The Black Effigy“, presented through a video, is off The Rite‘s debut album Liturgy of the Black, which will be released by Iron Bonehead on the far distant date of June 19th.

Brutal, skull-cleaving death metal threaded with pestilential and morbid riffing and lyrics voiced through guttural bellowing and occasional maddened howls. Its primitive and primally compulsive rhythms will get your head nodding and keep it moving, and as it evolves it will bring you to a wonderful, woozy and wailing, guitar solo.

The song here, presented through yet another video, is “Carnal Provision For The Rotten Masses“, taken from Deranged’s album Deeds Of Ruthless Violence, out on March 27th via Agonia Records.