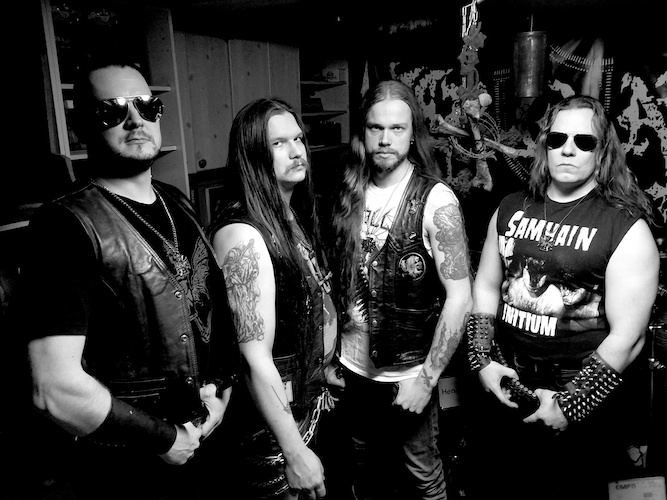 At this point I don’t know when or if I’ll finish the list with the 10 songs still left, because I need to make time for tomorrow’s SHADES OF BLACK. Stay tuned… but more importantly, be well and stay safe…. 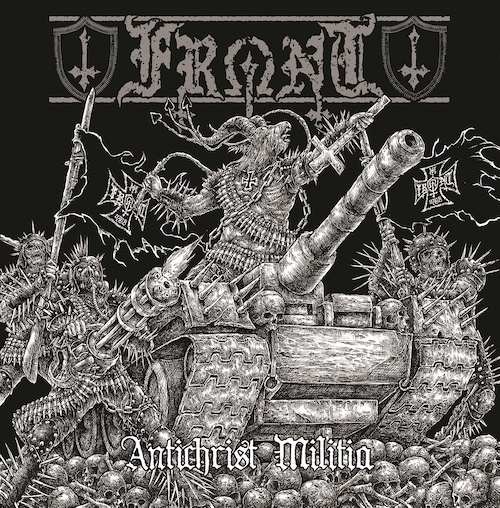 Get ready for blitzing black metal, complete with jet-speed riffing, crazed dive-bombing leads, munitions-grade drumming, bowel-plundering bass, tyrannical growls, and lunatic howls.  There’s a ton of wild, pulsing energy in the song, and plenty of chances to rock out (Motörhead style) as well as get slaughtered by the ecstatic viciousness of the attack. A perfect way to get your adrenaline into high gear if your ass has been dragging.

This song is the title track from Antichrist Militia, a new 23-minute mini-album by this Finnish band that’s set for release by Iron Bonehead Productions on June 5th. 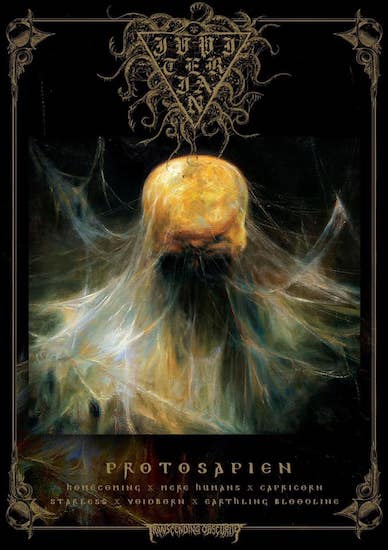 A very welcome return by a band whose last album was stupendous. The music gouges and batters, simmers and boils, transmits sounds of misery and mourning, and exudes an atmosphere of creeping catastrophe. Heartless, cavernous growls, tarry moaning riffs, and eerie leads combine with dissonant crashing chords, mutilating bass tones, and head-splitting snare strikes to enhance the song’s black aura of oppressiveness and inhuman menace.

Taken from the upcoming album Protosapien, which Transcending Obscurity Records says should be up for pre-order around mid-2020. The cover art is by Mariusz Lewandowski (Bell Witch, Mizmor, Eremit). 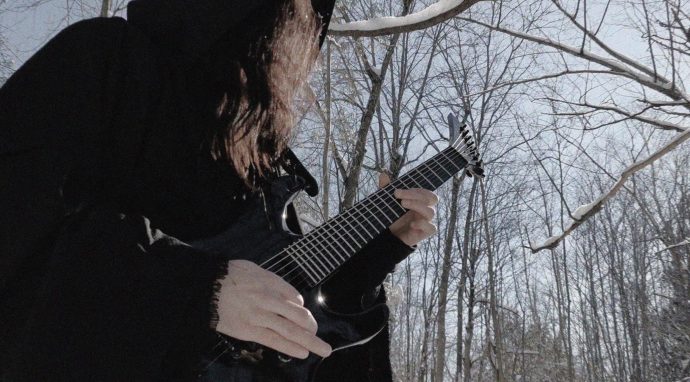 What comes next is a beautifully made new video for a song that first surfaced last autumn. To borrow what I wrote about it then:

“The song below is a long one, and a completely captivating one. The grief that dwells within it becomes immediately apparent in the solitary opening notes, and becomes an even more gripping presence through the mesmerizing trill of the main guitar lead. But while the music’s depressive atmosphere is unmistakable, it’s also a tremendously thrilling song. The compulsive drive of the rhythm section and the sheer shattering pain in the vocals assure that, but the shivering vibrations of the leads also send powerful electric currents through the body, even as they’re channeling strident grasping and severe heartbreak.

“The song also includes a gripping digression, when the music becomes slow and beautiful in its melancholy, and clean vocals provide a different expression of grief. After that, when the energy mounts again, the extended guitar solo is simply wondrous, and in its scintillating sounds (backed by deep, reverent choral voices) perhaps it hints at hope and flares into joy. There’s also a sense of mystic wonder and tremendous earthy vitality that comes through in the closing minutes. I felt like giving a standing ovation by the end”.

“Of Forests and Troubled Pasts” is off Maeskyyrn’s album Interlude, which is out now on Hypnotic Dirge. 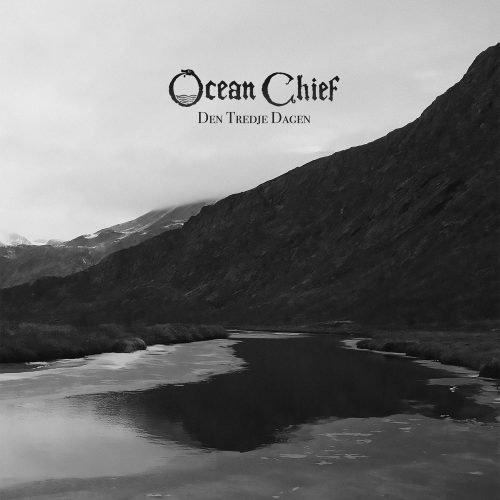 A week ago we published Comrade Aleks‘ interview of guitarist Björn Andersson of the heavy-hitting Swedish doom band Ocean Chief, whose sixth studio album Den Tredje Dagen is set for release on April 17th by Argonauta Records. A few days ago Argonauta uploaded a video for “Hyllningen“, a long song off the new album.

Slow, reverberating notes over subtle bass and drum accompaniment create a dismal spell, one that becomes a spell of a different kind when the band methodically bring down crushing chords and spine-jarring drum patterns, and then interweave guitar leads of smoldering anguish. One of the coolest segments of the song is a duet between a craggy, grumbling bass and theremin-like warbling keyboards which give the music a ghostly atmosphere (the drumming also plays a key role in that interlude). When the plague-stricken crush-fest resumes, wailing clean vocals appear for the first time, and they would make Ozzie proud. By the end, they’re dragging us by the hair through a sucking tar pit into a mass grave as spectres moan above us. 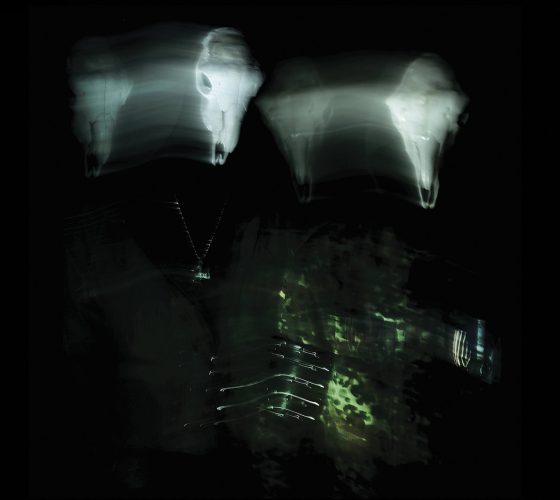 This two-part song begins in a dirge-like (but still neck-cracking) cadence, heavily weighted with the sounds of dread and doom, gradually mounting in energy thanks to increasingly acrobatic drumming. There’s no sharp break, but the second part of the song surges into a punk-like romping rhythm, with frenzied riffing and face-ripping screams that channel both cold cruelty and frightening delirium. The prominent drumming continually shifts gears, creating a vibrant ebb and flow in the energy, but the riffing remains full of menace and dread, until a frenzied finale in which every performer cuts loose in a display of mayhem and madness.

“Scisma / Grotta” is from an EP named Scisma, which has a May 16 release date through the Russian label Narcoleptica Productions.

This message from Austin Lunn accompanied a surprise two-track EP named Beast Rider that was released by Panopticon on Bandcamp today:

During the time that the live band were playing shows to support ” The scars of man….” we played some gigs where we did an electric version of “Beast Rider“. We did this version of “Norwegian Nights” dating back to our first ever live show…this kind of shoegazy country… “bootgaze” or what have you.

I had a few buddies suggest that I do a recording of those versions (Jan, I’m looking at you), just to kind of preserve them, since we tend to only play the metal stuff when we play as a full live band for the past couple of years.

I recorded these over the past weeks so I could raise some money to donate to musicians who are hard up during these times. The pandemic crisis is really hurting a lot of independent musicians, so I’d like to contribute in what ever way I can.

Every penny I receive from this release will be forwarded to musicians that I know who are struggling from cancelled gigs and tours, lost income that they depended on.

If you know anyone who is hard up during this time, please feel free to drop me a line and let me know who. This is a dark time. Lets look out for one another. Please stay safe out there…

don’t’ let the fire burn out.

ps. I promise the next few releases, including the new album I have been working on for over a year, are metal as hell. Panopticon is and will always be primarily a metal band. I just get a little side tracked some times...

“Beast Rider” is one my favorite dark country songs on Scars…, a haunting and emotionally harrowing song that easily gets stuck in the head but leaves you uneasy, due in no small measure to the harmonica-like wailing that cascades across the gigantic drum pounding and Austin Lunn‘s soul-searing vocals. The electric version is no less haunting, no less emotionally crushing, but the crystalline tremolo’d guitars swirl around you in mesmerizing fashion, and it’s easier to move your head to the drum and bass rhythm (in fact, it’s hard not to).

As you probably know, “Norwegian Nights” is a heart-breakingly beautiful acoustic song (and instrumentally, a beautifully layered one) that first appeared on 2014’s Roads To the North. As with “Beast Rider“, the electric version provides an excellent companion to the original. Austin‘s vocals display a greater purity than on the original, but are also more ghostly. And as on the new EP’s first track, the instrumental additions make the song more mystical, more immersive, and more head-moving. Very easy to just close your eyes and get spirited away to dark places….