Ugly, sludgy riffing that moans and groans… methodical drum pounding… grotesque, gritty growls and terrifying howls… a meaty bass line combined with eerie ringing notes… flares of evil braying chords rising up like a death anthem and descending like a plague gouging its way into the body… and then the guitar begins to pulse and the drums begin to hammer and rock… and things get fairly demented and frightening near the end before a final bout of gouging, groaning, and pounding. Really, the whole song is evil….

From this Danish progressive doom metal band’s album Sanctuary, coming on May 1st via Indisciplinarian. 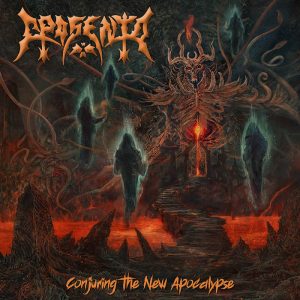 Cavernous vocals lead the song forward from brutish jackhammering into bursts of rapidly scissoring riffs, deranged soloing, and frenzied drum fusillades. Back and forth it goes, methodically brutalizing and then crazed, head-moving and then feverish… horrifying death metal of the old school executed with veteran skill by a Spanish band who started in the early ’90s and then revived in 2012 after a 15-year hiatus, still led by original guitarist Manolo Sáez.

From the third album Conjuring the New Apocalypse, to be released on CD/LP on May 5th by Xtreem Music. 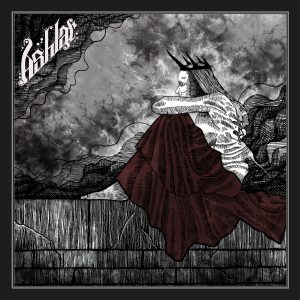 A rapidly hammering rhythm section drives the song, overlaid by trem-picked riffing that rises and falls, exuding feelings of feverish misery and frantic yearning. When the pace periodically devolves into a funereal march, the vocalist continues to scream and the music groans and wails, sounding even more destitute and hopeless. The band lock into a head-moving beat as the foundation for a slow, slithering solo that mewls and weeps (and reminded me of a bluesy harmonica). A very immersive blending of black, sludge, and doom metal.

The album is Kaikuja. It will be released by Eisenwald on May 15th. 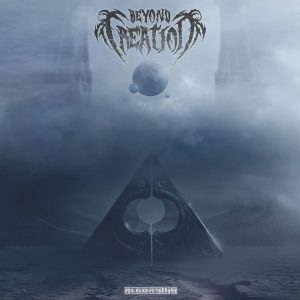 A great song, which begins in slow and seductive fashion but then ramps up in an electrifying surge, displaying the band’s well-known manual dexterity but also jolting your neck and creating moods of dark slithering menace, backed by blast-beat munitions and capped by an exhilarating guitar solo. And, as icing on the cake, we get to see the band do it on stage….

The song is from Beyond Creation‘s 2018 album, Algorythm. The video, which was shot in Montreal with Ismael Mossadeq as director, premiered through Ghost Cult Magazine. 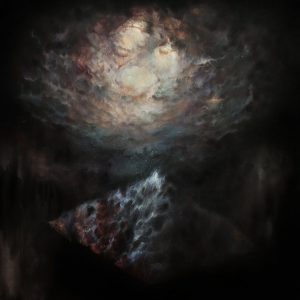 A remarkably multi-faceted and dynamic song. More classic rock in its influences than atmospheric black metal in its early stages, and enriched by crystalline guitar harmonies and glorious soloing, the song has an infectiously ebullient feeling, though the vocals come for your throat like a rabid wolf. The song also includes a beautiful, rippling guitar instrumental that’s pure sorcery, and that leads into a surge of sweeping grandeur that channels a mix of melancholy, anguish, and resilience. Magnificent….

The album is Absentia, this Italian band’s sixth album, and it will be released on April 24th by Eisenwald. 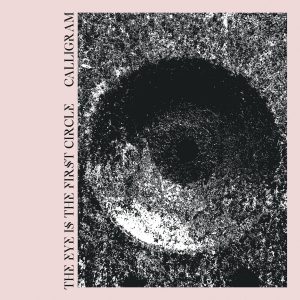 Andy Synn enthusiastically reviewed Calligram’s new album two days ago. Yesterday Invisible Oranges premiered the song “Kenosis”, along with an interview. It’s a pulse-pounding rush, but one that reveals other dimensions as it goes. I think I’ll just borrow Andrew Rothmund‘s words from his introduction to the IO premiere:

“‘Kenosis’ wastes zero time and offers zero pretense — from its opening seconds to its thudding outro, the song lays waste to your ears and anything within earshot as well. Saturated blasts comprise the song’s backbone, but over its five-minute course, Calligram experiments with plenty of different tempos, demonstrating both the band’s agility and songwriting sense.”

The album is The Eye is the First Circle, and it will be released by Prosthetic Records on April 10th. 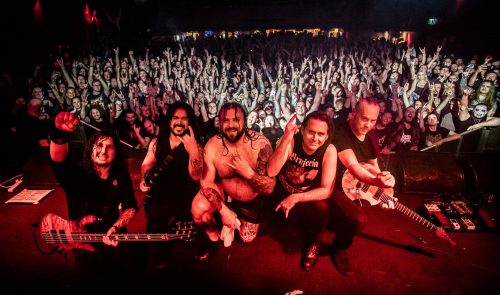 It was just a matter of time before Cattle Decap created something that focused on our current plague, and we’re lucky that we didn’t have to wait any longer. They’ve now released a song called  “Bring Back The Plague” that they made while self-isolating, and paired that with a music video that’s pretty damned funny. Of course, it also has a serious message — one directed at all the idiot hoarders and social gatherers out there.  I decided to share Travis Ryan‘s comments about it, and then just let you dive in:

“With the cancellation of our ironically titled ‘Europandemic Tour’ and social distancing recommendations set in place, we found ourselves with not much to do. So we figured why not address the elephant in the room in the form of a music video for ‘Bring Back The Plague’ and just film it on our mobile phones instead of with an actual crew. Dave didn’t even have access to a drum kit, and nobody is leaving their houses anyway, so we decided to lighten the mood with a video.

“Everything from the band name to the lyrics to the merchandise to the imagery have always been heavily steeped in metaphors and irony always with tongue firmly in cheek, so this new video by David Hall at Uneasy Sleeper may just be our coup de gras…for better, or for worse. Just don’t take it too seriously, we obviously didn’t. Sit back, have a laugh if you can, and stay the fuck home.” 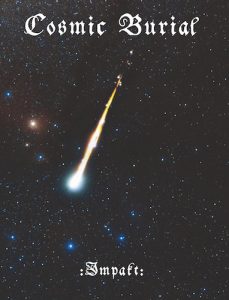 In his own words, the sole creator of Cosmic Burial‘s music (V.V.) describes it as “ambient/atmospheric music for dreamers about space and time.” The song below, a nearly 20-minute new track, is “99942“. It sets the hook immediately with exuberant, scintillating riffing and an interesting drum cadence and then proceeds to move through a multitude of changing phases, evoking moods of mystery and celestial glory, as well as poignant internal introspection and depressive gloom. Of course music of such length needs to be immersive, needs not only to draw the listener in but to fix them willingly in place for a long trip — and this track succeeds in doing that.

From the debut album, Impakt, with a release date of April 30 through Purity Through Fire. 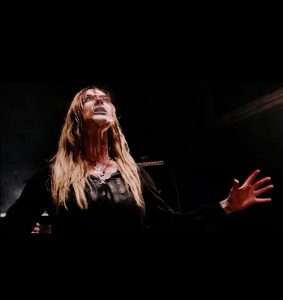 This next song will get your motor running fast and hot right off the bat. It combines melodic death metal with blackened banshee shrieking, delivering hard-punching bass lines and head-hammering drumwork with darting and jolting riffs. When the male vocalists raise their voices, they sound like heroic warriors, contributing to the song’s often “epic” feeling. And when the solo arrives, the song generates a menacing, supernatural aura. But this is mainly a full-throttle pulse-pounder, and a damned good one. Great video too (vocalist Sandie Gjørtz is as scary in her countenance as her voice is).

“Succumb the Euphoria” is the second song to be released from the band’s upcoming EP The Resurrection Of Lilith. I haven’ yet found the release date. 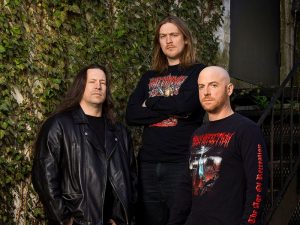 Die-hard fans of Dying Fetus will want to watch even the first 7 1/2 minutes of this next video, which is a documentary-style interview of the band filmed at MilkBoy Studios in Philadelphia, PA in 2017 upon the release of Wrong One To Fuck With, interspersed with footage of the band re-recording their classic track “One Shot, One Kill” with Swedish producer/engineer Mattias Nillson. If you’re not patient enough for that you can skip ahead to the 7:30 mark and listen to a new “One Shot, One Kill” performance, which is a big mauling and mangling thrill. 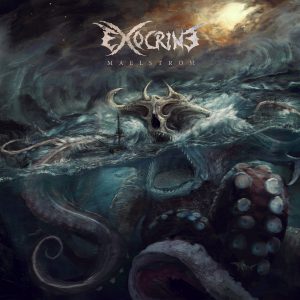 Exocrine turn on the after-burners for this new song and video, discharging bursts of thunderous, hyper-speed drumming, spidery fretwork, and gruesome roars — but they mix in plenty of tempo dynamics and brutish grooves, as well as bits of swirling melody, darting electronica, ascending voices in the chorus, and a head-spinning solo. All in all, a spectacular escapade….

This is the title track from Exocrine’s new fourth album Maelstrom, which Unique Leader Records will release on June 26th. 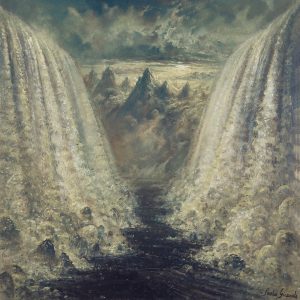 The opening guitar instrumental is a seductive piece of musical sorcery, and as the incendiary screams and slow, heavy rhythms come in, that melody is even more wondrous and enthralling. The music becomes panoramic in its sweep, but also deeply sorrowful in its mood. The flickering lead that rises through those grand cascades of sound channels anguish, and when that opening riff returns in adapted form, it seems grief-stricken (but still mesmerizing). Yet even as the mood darkens, the song still seems… wondrous.

This is one of those songs that manages to be both heart-swelling and heart-breaking, and the spell it casts never fractures over the course of these nine gripping minutes.

This is the title track from Forgotten Tomb‘s tenth album Nihilistic Estrangement, out on May 8th via Agonia Records. The great cover art was painted by Paolo Girardi.