The relatively new Danish label Strange Aeons Records is on a roll. After giving a vinyl release to a 2018 album by Poland’s Occultum, they’ve made a big move forward this year with the vinyl release of both the latest album by Horned Almighty (To Fathom the Master’s Grand Design) and the new EP by NyreDolk (Indebrændt), word of which seems to be spreading like wildfire among people I know. And now Strange Aeons is following that one with a new EP by the Danish band Gabestok.

As that list of band names would tell you, Strange Aeons has an affinity for black metal, and Gabestok are indeed a black metal band (though not, perhaps, in the conventionally understood sense). They’re part of what’s become known as the “Korpsånd circle”, a diverse group of DKBM bands who have rehearsed and recorded their releases at the venue/rehearsing space Mayhem in Copenhagen. Their debut album Tre (now sold out) was released last fall by Strange Aeons, and this new EP — På herrens brakmark — will be released on May 15th.

What we’ve got for you today is the premiere of a video for a track off the new EP named “Jeg slæber“, and both the sights and the sounds make for a hellishly good time. 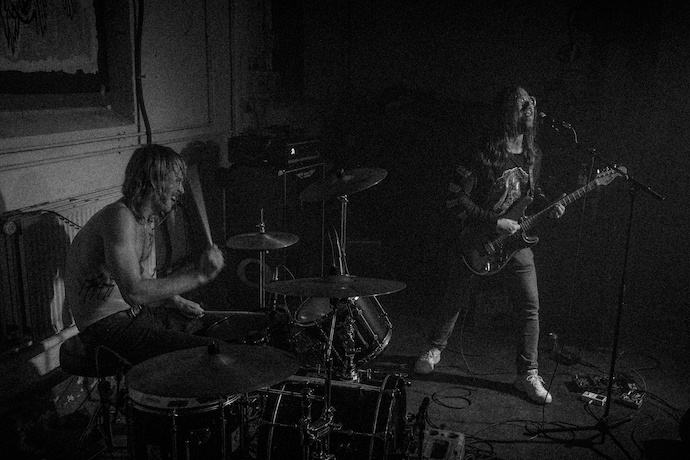 “Jeg slæber” succeeds in multiple ways. The clanging chords, just slightly abraded with distortion, coupled with the pulsating bass tones and a locked-in back-beat, immediately create a reflexive desire to move (for some, its primal, carnal appeal may create a reflexive desire to fuck). In addition, the shrill, shining leads add to the music a slightly psychedelic feeling of ecstasy and abandon, while the caustic rasping vocals are a convincing facsimile of vicious demonic possession.

Even when the band are getting your head and body to move and fashioning hallucinatory and/or coital images in your head, there’s a feeling of lurking menace in the song, and that feeling becomes much more prominent when the drums back off and the guitars generate an atmosphere of gothic horror. And be warned: this thing is highly infectious, a musical contagion in these highly contagious times.

So, to sum up: “Jeg slæber” is a nasty and highly infectious piece of work — primal, carnal, sinister music with psychedelic accents, an occult aroma, demonic vocals, and the capacity to make people move reflexively. What more do you want?

The video, by the wqy, is great. The occult, orgiastic, and occasionally blood-spraying scenes from cult horror movies suits the music really well, and although the song isn’t the kind of music that brings frenzied violence to mind, the video’s concluding collage of high-powered automatic-weapon mayhem blasting flesh to shreds still seems fitting. 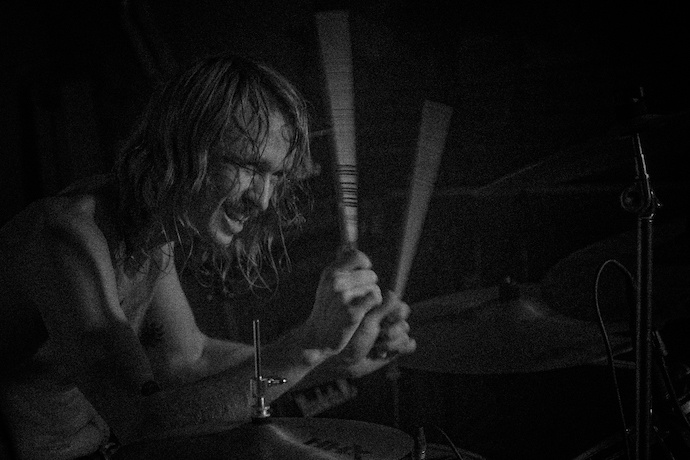 På herrens brakmark includes four songs that are described as “genrewise-varied”, and bridge a gap between the sound of Gabestok’s album and the demo recordings that preceded it. “Grim, fierce, melodic and not without a touch of absurd degenerate humour”.

The EP will be released by Strange Aeons on cassette and digitally on May 15. Presales are starting today. In addition, Tre also be re-released on the same date on cassette for the first time.

One Response to “AN NCS VIDEO PREMIERE: GABESTOK — “JEG SLÆBER””