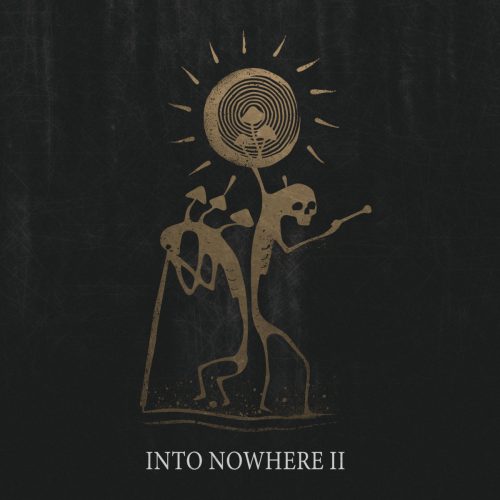 We are about to leap with glee off our well-trodden paths, leaving behind us our usual metal extremity, lured away by black magic into a strange (and for us, a largely unfamiliar) realm. The Russian sorcerers who have cast this spell of psychedelic black rock have named themselves Cage of Creation, and their most seductive incantations are now to be found within a new album named Into Nowhere II.

As the album’s title suggests, it is a sequel to their 2016 debut full-length Into Nowhere, the Roman-numeraled songs picking up where the last track of that one left off. And these are indeed masterful sorcerers, like the Pied Piper of Hamlin who will lead us dancing away, never to be seen again, or like Hansel and Gretel’s cannibalistic witch luring us with sweets into the oven, or like the Devil himself who invites us in charismatic commands to cavort around a midnight bonfire whose sulfurous fumes become deliciously aromatic to our bedazzled senses.

The album was first released digitally and on tape earlier this month by NEN Records, but on April 29th it will receive a CD release by Devoted Art Propaganda, which provides the occasion for today’s presentation of a complete album stream.

The temptation to resort to black-magic descriptions of the music is irresistible. There are hooks in everything, in the primal rhythms, in the compulsive melodies, in the syncopated vocals — in the sheer spirited vitality of all the sounds together. It has the contagious ingredients of the most can’t-get-it-out-of-your-head pop music, but make no mistake, it’s also evil. And it’s ingeniously and carefully crafted to create not merely addictive concoctions but musical potions that spawn hallucinatory and menacing visions, and lingering spells. These are not cheap thrills, but rich and resonant ones.

If you look, you will find Cage of Creation in Metal-Archives, there classified as “Experimental Black Metal”. But at least in the case of Into Nowhere II, that classification would seem to be based almost entirely on aspects of the vocals, which in part are demonic, and perhaps in that aura of diabolical seduction and menace that radiates from the music. But other more familiar dimensions of black metal are missing. Here, the guitars ring out with shining clarity, the rhythms bounce and bob, the keyboard tones often hearken to the ’60s and ’70s, and the voices take more varied directions.

There are moments on the album when the band create chilling reveries — through the whispering synths and strange ticks at the outset of the first track’s slow build; within the second half of perhaps the best track (“IX”) when the rhythm vanishes and the music seems to have entered a spectral realm in which moody exhalations, piercing and moaning wails, and agonized cries waft around a collage of strange percussive sounds; and during “XII” when the drums subside into slow thumps and things get very eerie indeed.

But for the most part these songs all have compulsive rhythmic pulses of differing kinds, coupled with gleaming melodies that are powerfully alluring. The gravel-throated bass and the hook-filled drum beats beckon listeners to throb and bob, while those crystalline guitars ask you to close your eyes and float among their reverberating harmonies. They create multiply layered spells, while the variable vocals chant, moan, and wail, or vent fiery proclamations, or growl in grim and gruff mutterings.

And so, the songs bounce and mesmerize, shimmer and slug, but the deep harsh vocals remain a menacing presence, and the inflamed cries channel something on the line between dismay and despair. The voices repeatedly become unnerving, but not far away they will sing again, and the singing is just as enticing as the beautifully nuanced guitar work and the quavering keyboards.

Is there anything wrong with this album? I will answer you honestly: No, there is not. The music may turn out not to be your cup of tea, especially if you are in the mood for more extreme and abrasive sounds, but for what these Russians have set their mind to do, it’s just about immaculate.

To repeat: On April 29th Devoted Art Propaganda will release Into Nowhere II on CD, in a limited golden digipack edition, and it will be available digitally as well. As the label says, the record “takes the listener deep into the forest on a lunar shamanic journey, it explores moonlit nights, the thin line between meditation, death and infinity. Follow up your end-journey deep through the timberline. Just remember, the deeper into the wood you go, the more angry your demons go!”

2 Responses to “AN NCS ALBUM PREMIERE (AND A REVIEW): CAGE OF CREATION — “INTO NOWHERE II””