Stygian Bough Volume I is the name of a new collaborative album by the Pacific Northwest bands Bell Witch (Dylan Desmond and Jesse Shreibman) and Aerial Ruin (Erik Moggridge). These three have collaborated before, both on recordings and on stage, but not in this way. Here, they have composed and performed all five songs on the album as a trio. 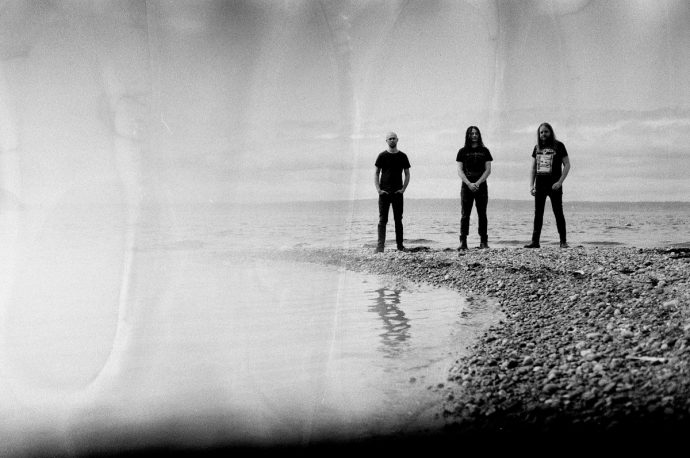 On the Bandcamp page for the record there’s a great deal more information about the album and how it came to be created, but for now I just want to pay attention to the first song revealed from it, a track called “Heaven Torn Low II (the toll)“.

Both Bell Witch and Aerial Ruin have proven themselves capable of creating music of great beauty, and such moments are to be found within this new song, but at first it is simply crushing in its emotional and sonic weight. The combination of long reverberating bass chords and simmering higher tones, layered over a slow, methodical drum beat, drag the listener’s mood down into desolation. The rising ethereal voice that slowly drifts above is indeed beautiful, but its sound is also heart-breaking.

The music groans and wails as it moves forward in a mortally wounded stagger, weaving a sepulchral spell as it goes. Close your eyes, and let it take you, and don’t be surprised if you feel a little hollowed out and choked up by the end.

Stygian Bough Volume I will be released by Profound Lore on June 26th. 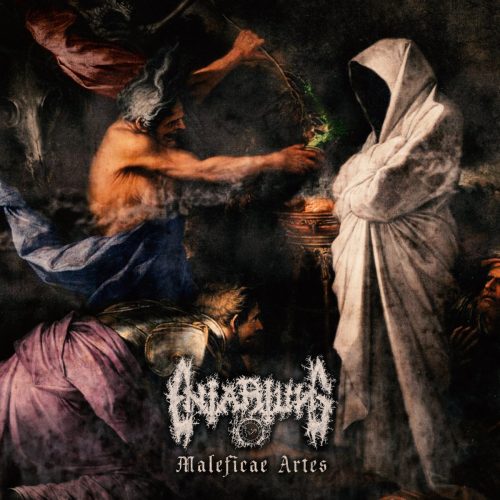 Maleficae Artes is the name of a new album by German black metal band Entartung. It will be released on June 27th by Dunkelheit Produktionen. That announcement, and the track stream that accompanied it, seized my attention both because of the impressive nature of the band’s past work and because of the striking cover art, which is a modified version of an 1668 painting by the Italian artist Salvator Rosa entitled “Saul and the Witch of Endor” (which, as stated on the album’s Bandcamp page, “illustrates a Biblical episode where king Saul summons a spirit with the help of a witch – directly violating Mosaic Law that demanded the death penalty for necromancy”).

The Bandcamp page further explains that “[t]he lyrical subject matters explored on Maleficae Artes are devoted to death, the Faustian spirit, ancient rituals and traditions and the darker chapters of human history; enhancing the experience in a synergetic fashion”. And now for that advance track:

A spirit of melancholy and gloom emanates from the acoustic guitar melody that opens “Bortförd“, and only deepens as a slow and steady drum beat emerges and tremolo’d riffing whirs in dark and dismal tones. The tandem of clean and harsh voices is consistent with that feeling as well, the solemn male chorus channeling reverent, funeral remembrance and the caustic snarls finding a line between wretchedness and rage.

The drumming begins to drive hard and pummel, and with that accelerated intensity, matched by the thumping bass, comes a fieriness in the riffing, which feels feverish in its anguish. The band then layer in a swirling lead guitar that radiates an intense, beseeching melody.

The drumwork continues to change, morphing into a cracking rock beat, and with that the buzzing riffs seem to brighten, to feel almost hopeful yet not without anxiousness. There’s a beautiful clean solo guitar in this brightening mood as well, and the music begins to soar as its heart-swelling energy climbs to a crescendo. The harsh vocals bark and snarl, further intensifying the song’s climax —  which seamlessly becomes less glorious and more perilous.

An elaborate, emotionally affecting, and beautifully dynamic song, “Bortförd” makes for a great preview of this new album, which we’ll be watching for closely.