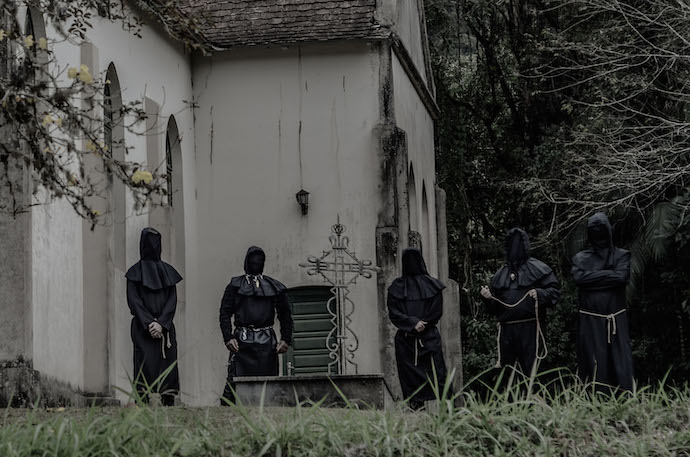 (On May 27th Talheim Records will release the debut album of the Brazilian band Lacrima Mortis, and that prompted Comrade Aleks to reach out for an interview… which now follows.)

Five hooded figures wearing black masks stand in front of old church, one of them holding rope in its hands. I couldn’t ignore Lacrima Mortis when I saw this photo.

The band was formed in Blumenau, Santa Catarina, Brazil, 2016. The band’s members clad their identities with pseudonyms — Requiem (guitars), Dread (vocals), Baud (guitars), Scavenger (drums), and Reaper (bass). There was only the EP Optare Mortem (2017) in their discography until recently, but Talheim Records announced the release of Lacrima Mortis‘ first full-length work, Posthumous, on May 27th, so fans of slow ceremonial doom-death metal be aware!

Meanwhile we’ve taken a glance at the Brazilian underground together with one of the hooded congregation — Requiem.

Hail Requiem! It seems the last times are upon us. How does the situation with quarantine develop in Blumenau?

Hail, Aleksey, thank you for the contact. Here, as in the rest of Brazil, there are people taking the quarantine seriously, following the WHO recommendations. On the other hand, president Bolsonaro’s followers keep wanting to go outside because this no-brainer insists that COVID-19 is only a small flu. 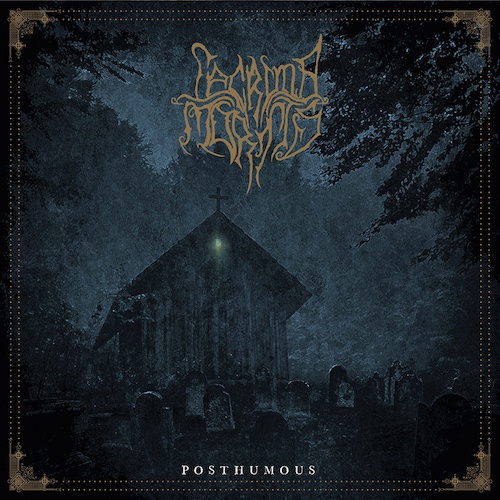 Might this stuff affect the release of your new full-length album Posthumous?

I believe not, since Talheim Records, our record label, is from Austria, where COVID-19 has already arrived, and the release date was established by them.

Before we return to Posthumous, I’d like to clarify the story with Lacrima Mortis’ foundation – how did it happen? And did you plan to use this gloomy image with robes and full masks on your faces from the start?

The idea for Lacrima Mortis came to me by the end of the ’90s, as a side project to my old band Dying Embers, but it didn’t last long. Over a decade later, with some changes in my personal life, I decided it was time to bring back those compositions, and in 2016 Lacrima Mortis was reborn as we know today.

Since before Lacrima Mortis I wanted to use some kind of vestment to impact people, since doom metal is not a mosh pit kind of music, and it was also inspired by the look of Sunn O))), The Funeral Orchestra, and Tyranny. I introduced the idea to the other band members and we got to the look we have today.

What’s the story with Dying Embrace? There were a few death-doom bands in Brazil back then in the ’90s but only Mythological Cold Towers managed to get recognition and remain alive for years. Was that because of lack of money or because of lack of support?

My old band was called Dying Embers, not Dying Embrace. Dying Embrace is another Death/Doom band from Brazil. They released excellent material in the past, and after a long hiatus, they are preparing new material to be released soon.

Dying Embers, my old band, started in ‘97 and was supposed to be a Death/Doom band (obviously), but over time we evolved in our instruments and in its later years we were almost a Progressive Death Metal band. In the 10 years the band was active we recorded some demos, and when we were preparing our debut, the band broke up.

Mythological Cold Towers is an iconic band from our scene, very respected. From the ’90s, we also have Eternal Sorrow and HellLight. One of the pioneers of the genre, The Cross, is still active, having released an excellent album recently.

Requiem, being the band’s founder, how did you recruit other members? Doom metal isn’t a popular genre in Brazil still, so every new doom band from your area is something unexpected.

I already knew Scavenger, the drummer, and we had already talked about starting a band together. He was a little reticent at the time, for his old band Nighthawk (Black Metal) was on a break and he was not very familiarized with Doom Metal, so I showed him some references. He asked me to record some doom music and send him by e-mail to see if he could come up with something.

Me and guitarist Baud worked at the same place. I had already told him I was trying to start a band and he said he was available to play guitar.

Vocalist Dread was invited by our drummer Scavenger because they play together in a Splatter Death Metal band (Desperate Soul-BR) and we found Reverend Reaper through a post on Facebook when we were looking for a bass player.

We are one of the 4 doom bands in Blumenau and surroundings: In a city nearby, Joinville, there used to be a festival dedicated to the genre called Eclipse Doom Fest. In Curitiba, located in the state of Paraná, 3 hours from Blumenau, there is Eternal Sorrow, Lachrimatory, De Profvndis Clamati, and My Suffering, just to cite a few. In Brazil’s southern region, where we live, maybe because the climate is very different from sunny north/northeast, people are more introspective, which favors the emergence of new doom bands. 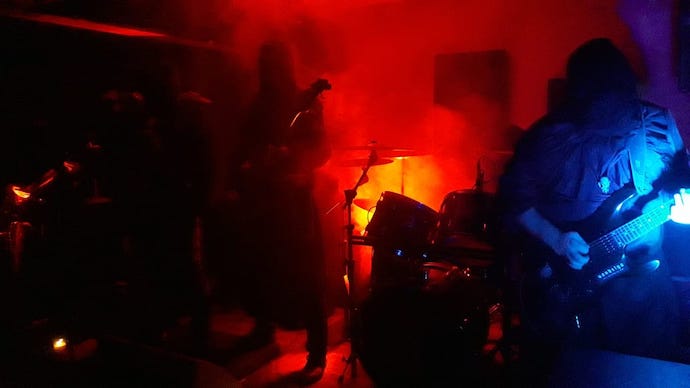 Doesn’t wearing masks make a problem in performing songs on gigs? I’ve had a glimpse of your live show on the Lacrima Mortis Facebook, which looks impressive.

This look brings a more tetric, even theatrical image to the performance, but due to the veil we wear it is a bit tricky to see the guitar neck when the lights on the stage are a little low. We must have extra concentration to not make any mistakes. Sometimes there are a few, but nothing that can ruin the songs.

How often do you have an opportunity to play live? I know from other bands that to play doom live in Brazil is kind of hard, because people are mostly into faster or more trendy music. Well, like everywhere probably.

Yes, Brazil is a hotbed of Death Metal and much of the public wants to go to the gigs to release this accumulated energy, but luckily in our region there is a Doom Metal scene with some doom festivals where the public knows exactly what to expect.

So where do you play live usually? And is it possible to play a tour in Brazil for a band like yours?

Yes, we played some gigs in the past with the bands HellLight, Eternal Sorrow, The Crimson Dawn Project, Agony Voices, to cite a few, but since Brazil is such a large country it’s a little expensive to go on a tour. We would like to have done more, but for the moment our return to live performances is not set to happen anytime soon. 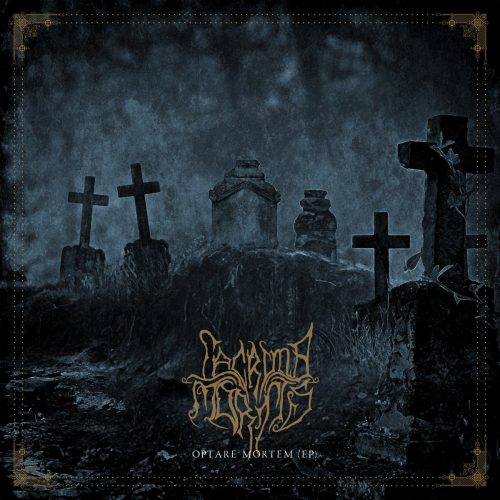 Your first release was the EP Optare Mortem (2017). Did this release draw people’s attention to the band? How widely did you spread this EP and did you get a feedback from abroad?

Yes, for such a limited release we had a good feedback, which felt very rewarding. We also sold some digital copies for people from outside the country and some physical copies mainly to buyers from Ukraine and Eastern Europe.

Ukraine? Because that was a short run of tape editions?

Yes, but the sales were made before the tape edition was released.

How did you get in touch with Talheim Records? Are you satisfied now with this collaboration?

I already knew the people at Talheim because I had already done some graphic work for my friend Paolo Bruno’s Thy Light and it was a natural process until the contract was signed.

I’ve heard the first song from Posthumous, “Imprisoned In Death”, and it sounds quite raw. Where and how long did you record the new material?

The recording took place in the end of 2018 and the beginning of 2019. The mixing process went on for the year. And since I am a diehard fan of the ’90s Death/Doom sonority all that rawness was kind of natural.

We used a small recording studio, owned by Fernando Cebola, in a nearby city, the same recording studio where Goatpenis recorded their last work, and other bands in the region.

Well, Goatpenis… sounds like a mark of quality… Did Fernando Cebola take a big part in recording? How did you collaborate with him?

Fernando was very attentive during the recording process, especially when it came to fitting the Gregorian chants on some tracks. He understood exactly what I was trying to show in the album. We discussed some ideas, some of them worked, other didn’t and were discarded.

How do you see the strong sides of Posthumous today now that the album is complete? What makes you proud of this work?

I’m suspicious to say, but particularly I felt very pleased with the final result. I know some things could have sounded different or even better, but everything I had felt over the years is there. All the angst (‘Optare Mortem’), sadness (‘Words of Blood’), and anger (‘Distress & Decadence’) is present in this material. 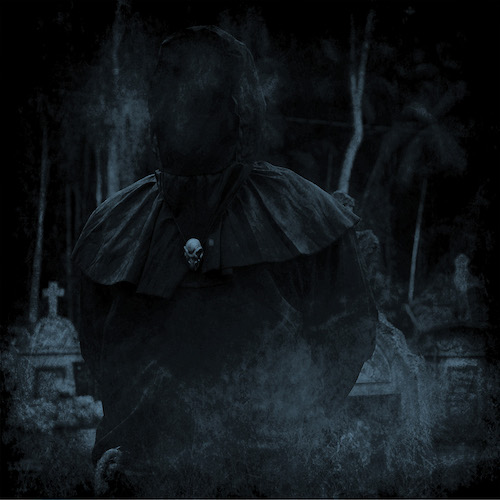 Does Posthumous have a therapeutic effect for you? What kind of message do you put into these songs?

In a way, yes, because much of what I have lived in the last years are shown there and while I was writing some songs I lost my mother to cancer and that brought out some feelings

What are your plans now for Lacrima Mortis in 2020 considering the virus’ stuff? Will you try to promote the band with live shows or will you focus on writing new songs?

Even before the recording of Posthumous, I had already written an idea for Lacrima Mortis’ second album, but with this virus all over the world and some things that are happening in my personal life, the plans for rehearsals/gigs are out of the question.

All I can do for now is to finish the new songs and, in the near future, record this second material, and mature the idea of a tribute EP with some covers. Let’s see what the future holds for us.

I wouldn’t like to hurry events, so I will leave my questions about the matter of the next Lacrima Mortis album for the next interview. Thanks for your time, let’s hope Posthumous will find its listeners fast. How would you like to resume the interview?

Thank you for the contact, I hope we can talk again soon, and as soon as something new comes up I’ll let you know. Follow us on social media, Facebook, Instagram, and I hope you enjoy our debut.

One Response to “AN NCS INTERVIEW: LACRIMA MORTIS”