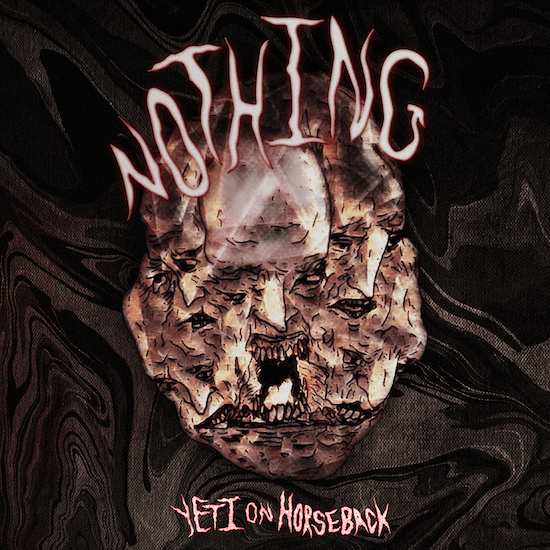 Almost four years ago I learned the error of leaping to faulty conclusions about the music of Yeti On Horseback based on their band name. Their name seemed fanciful, maybe even fun-loving. The music on their 2016 debut album The Great Dying, as it turned out, was as serious as a heart attack and just as life-threatening, a fashioning of doom metal with a nihilistic vision and an apocalyptic impact that was somewhere over on the other side of a black galaxy from anything light-hearted.

Here we are nearly four years later, and this group from London, Ontario, Canada, haven’t softened their stance or become mellower with the passing years. Their new single “Nothing“, which we’re premiering today, is stunningly dark and dauntingly massive, and dynamic in a way that only reveals different dimensions of devastation, shaking the earth and the soul in equal measure. 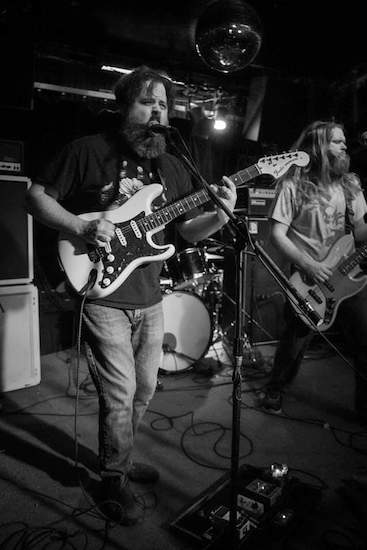 We’ll introduce “Nothing” in two way, first sharing the band’s statement and following that with our own impressions. The band explain:

“Since the release of The Great Dying in 2016, we as a band have gone through member changes, birth, death and a plague. And still we were able to record ‘Nothing‘ .

“‘Nothing‘ is bleak and unrelenting. It is the soundtrack to what is real in this human life. Misery, suffering and death. We are not special. We will not be remembered. Life is nothing.“

Judging by the music, there’s nothing phony about those words. This 11-minute beast leads us on a harrowing journey into a lightless abyss of crushing oppressiveness and inconsolable pain — and then escalates into a display of monumental calamity.

Glacially slow for much of its length, the chords groan in deep, massive, reverberating tones, the dragging progress marked by catastrophic percussive detonations and larynx-shredding shrieks of mind-lacerating intensity. The gaping maw of this terrifying sonic realm is vast and capable of swallowing listeners whole. Every time the vocals appear, the effect is shattering, but they’re not alone in that respect — shrill, preternatural guitar excretions raise their miserable heads as well.

The pacing of the song does eventually increase, with markedly more animated drum battering leading the way, followed by vibrant, jolting and jabbing fretwork and earth-quaking bass rumbles. After having drawn us into oppressive depths, the music has become a crushing juggernaut. When the pace slows again, the wailing guitar leads and momentous, elevating chords create an atmosphere of hellish grandeur, as if our fall into the abyss has been arrested and we’re now being carried up by a rising monolith of awe-inspiring immensity and nightmarish aspect — as if a tyrannical proclamation that life is indeed… nothing.

“Nothing” was recorded, mixed, and produced by Michael Marucci and mastered by Peter Letros. It will soon be available on Bandcamp, where you can also check out Yeti’s full-length The Great Dying, and on all other major platforms.

One Response to “AN NCS PREMIERE: YETI ON HORSEBACK — “NOTHING””