(This is Andy Synn‘s review of the debut album by END, which was released on June 5th by Closed Casket Activities.)

For years the UK and the USA have enjoyed (and endured) something called a “special relationship”.

This strange, strained, frequently estranged, situation has – for better or worse – resulted in an ongoing, tit for tat, “anything you can do we can do better”, back and forth between the two nations that has led both to the creation of some amazing art… and some pretty terrible political decisions.

The latest entry into this co-dependant cultural exchange is Splinters from an Ever-Changing Face, the debut album from pseudo-supergroup END, a band who seem to have spent quite some time listening to the collective works of Anaal Nathrakh and thinking “oh yeah, we can do that…” 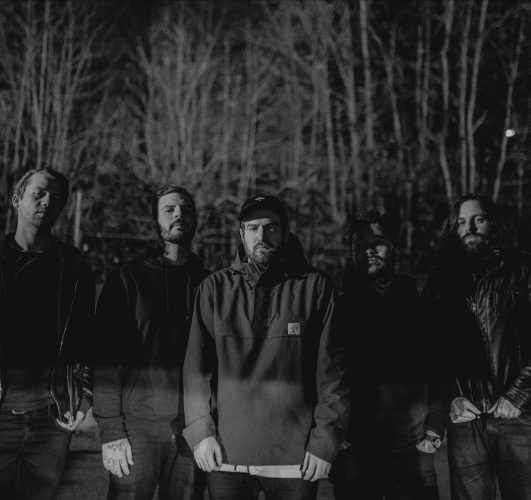 Now, to be clear, I’m not accusing END (whose line-up is filled out by current and former members of Fit For An Autopsy, Counterparts, Misery Signals, and more) of plagiarism, appropriation, or anything of that nature (for one thing there’s little to no “blackened” influence to be found here).

But the similarities – the massive, sickeningly malevolent guitar tone, the blistering blend of strafing blasts and hyper-aggressive d-beat drums, the howling, almost unhinged vocals – are hard to deny, particularly when the band put the pedal to the metal on killer cuts like the abrasive “Absence” and ferocious mid-album highlight “Captive to My Curse”.

That being said, END definitely bring much more of their Hardcore roots to the overall mix, and whether it’s the grinding chug-a-thon of “Pariah”, or the whiplash-inducing shift between blastbeats and breakdowns (and back again) on a song like “Fear For Me Now”, this sense of bristling, bare-knuckle belligerence and street-level savagery helps separate and set them apart from their more obvious peers and/or inspirations.

Ironically, of course, it’s at times like these – such as during the barely-controlled chaos of “The Reach of Resurrection” or the almost Deathcore-like grind of “Hesitation Wounds” – where the band also remind me quite a bit of another one of their British cousins, Employed to Serve, although that should also be considered as a compliment, and not a criticism, considering how impressively both acts are able to weld together the ragged and jagged edges of some seriously extreme influences into a surprisingly concise and cohesive whole.

Speaking of concise… one of the great, and underappreciated, strengths, of this album is how short it is (and that’s not meant as a backhanded compliment by any means), with its eleven tumultuous tracks ultimately clocking in at just under thirty-three minutes in length.

And while not every track hits quite as hard or leaves as lasting a mark as something like frenzied opener “Covet Not”, the fact that only a single song here breaks the four minute barrier means that you’re unlikely to ever need to reach for the “skip track” button, as there’s always something new ready and waiting to pulverise your eardrums just around the corner.

It’s always difficult to predict how putative “supergroups” like this are going to turn out. Quite often, if we’re being brutally honest, the chemistry between the members simply isn’t there.

But, as Splinters from an Ever-Changing Face goes to show, when it is, the resultant reaction is nothing short of explosive.

3 Responses to “END: “SPLINTERS FROM AN EVER-CHANGING FACE””