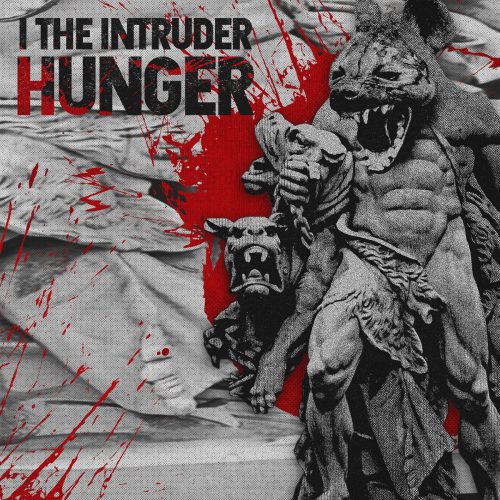 (This is DGR’s evocative review of the debut album by the Tunisian metal band I the Intruder, which was released on April 27th.)

Sometimes it’s fun to guess why a certain album might be sent to yours truly with a note that says, “You should probably check this out”. Psychological analysis aside, the fun part is trying to figure out why they sent it specifically in this way and what they saw in it that said, “Y’know what? maybe this person might like it”. I certainly can’t be the only one who semi-enjoys this game when friends recommend stuff, so when the late-April-released album Hunger by I The Intruder came sailing across the desk, the immediate “Okay, why?” came into play.

In this case, I would have to wonder if it was my unabashed love for Vitriol’s To Bathe From The Throat Of Cowardice last year and how it was a relentless beating of an album that just kept unleashing musical whirlwind after musical whirlwind. While not quite as suffocating a brand of death metal (I The Intruder do have a knack for rapid-fire grooves that just pile on top of each other), Hunger is of a similar nature, at eight tracks and a little over a half hour of non-stop deathgrind. 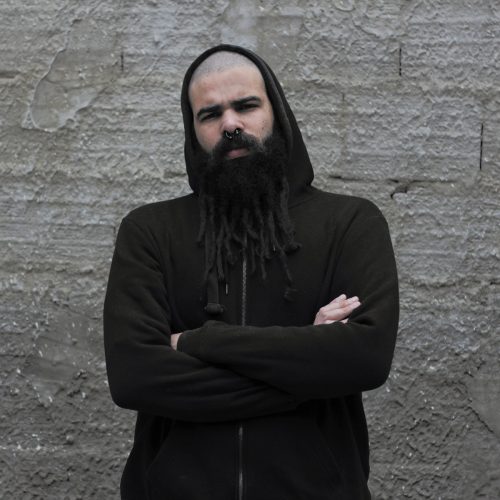 I’ve seen it described as technical deathgrind in some places, and the group’s Metal-Archives listing seems to notice the divide in their sound as well. This can probably be ascribed to heavy metal’s obsession with having to categorize everything, and in this case I The Intruder are in a strange place since we don’t yet have ‘nonstop’ listed in our genre catalogues. Yet there are basically zero moments to breathe on Hunger, and project owner Mahdi Riahi delivers vocals at such a rapid pace that it’s sometimes hard to keep up as the songs toss you back and forth like a ragdoll.

So yeah, in this case I The Intruder falls squarely into the wheelhouse of yours truly.

The time between the start of “Anti Human Apparatus” and its vocal delivery is a little over five seconds. Instrumentally, the song adopts a lot from its deathgrind forebears since it – and much of Hunger as a whole – starts off at a high-pace, full of thundering drums and angular guitar work that rapidly jumps from one groove to the next. This quickly becomes the layout that Hunger follows to a ‘T’, an orbital strike of one very specific niche expanded over eight songs and a half hour.

The breathless delivery and the cavalcade of nihilism that defines Hunger makes its negativity nearly all-consuming, and conveys the sense that you as a listener need to be moving at about the same rate. If the ‘grind’ aspect of the music lends credence to the idea that it is a musical tantrum, then the tech death side of things provides much of the headbanging and pitting that may happen in between. One thing’s for certain: Much of Hunger is written as an adrenaline rush.

At times it can feel like Hunger‘s operating strategy of ‘everything, all things, incredibly fast’ can be working against it, because once the first two songs snap by in a pyroclastic flow of angular grooves and battering drums, even the vocals can start to pile on over themselves. If you thought the “breathless” description early on hadn’t quite been fulfilled yet, once the vocal work of “A.L.M (A Loathing Message)” joins the fray of high-speed energy then those doubts can be put to rest.

If you’re looking for something of the room-filling nature to go alongside the relentless nihilism and the non-stop musical assault, Hunger‘s title track is one of the largest on the album. It’s not the longest – those honors go to Hunger‘s second song “Fuck The Revolution, Bring On The Plague” – but still, even with a track time falling in line with most of Hunger‘s songs, the title track does a lot to differentiate itself.

Part of that can be credited to the way it echoes its immediate predecessor “Slow Suicide” in its back third as well, where it goes from being another straightforward hammering assault into a near-apocalyptic blackened death metal song. The opening of “Hunger” bounces all over the place and makes use of the album’s frenetic energy to keep a neck-snapping headbanger of an intro moving, but it starts to answer the call of the blackened death metal void and leaps headlong into those reaches about halfway into the song. When it does so, things get straightforward blastbeat heavy and very chainsaw guitar grind leaning. All of those gigantic sounds combine with some heavy lows to create an oppressive atmosphere on a disc that does a pretty good job remaining terrifyingly precise in its production style otherwise. Right when it seems like Hunger is going to start to peter out in terms of just how crushing it can get with its weaponry, it decides to throw that title song at you.

The thing to keep in mind with Hunger is that it is laser-focused on its specific songwriting style. Subtlety? Ha! Subtlety gets tossed out the window like the bodies on the cart during the ‘bring out your dead!’ sample on the disc. Whenever the idea of something being ‘wall-to’wall’ gets brought up musically, it is usually used to describe a space and how a disc fills it. “Wall to wall” musical style can describe how an album is filled to the brim with that style. In the case of Hunger, ‘wall-to-wall’ feels more literal, like the album is legitimately tossing you around the room looking for a high score on how many walls it can bounce you off with each-successive breakneck tempo and rhythm change. Headbanging along to each part seems like it would be equal parts workout and nightmare.

What you can embrace, though, is that Hunger is crushingly heavy, stupid fast, and a steamroller of an album. It’s a dense thirty minutes that flies by because it is its nature to do-so, not a miracle of songwriting. This disc moves fast, and you will either be left in the dust or left as dust. It’s an impressive first full-length from a project in its early phase, with only an EP to its name before this. Keep an eye on them.

One Response to “I THE INTRUDER: “HUNGER””