Today we welcome a new contributor to NCS who goes by the name Jet. She has been a DJ and administrator at Metal Messiah Radio as well as staff interviewer for Sick Drummer Magazine and ViaOmega Magazine. Today she has brought us an interview of multi-instrumentalist Scorpios Androctonus, the founder of the black metal band Crimson Moon which has been located in Germany since 1998. The band’s latest album, Mors Vincit Omnia, was released last year by Debemur Morti Productions.

Scorpios, Crimson Moon started in Southern California in 1994. Prior to that what was it that intrigued you about the occult and dark arts and was this something you practiced as part of your lifestyle?

What kind of music were you listening to before forming the band and did this music influence you once you started up Crimson Moon.

A large influence at the time of starting Crimson Moon was the second wave of Black metal but also earlier Death Metal, and I grew up to a lot of classic heavy / thrash / speed metal along with a lot of Classic Rock and even some of the more extreme punk and crossover stuff like The Exploited, English Dogs, Septic Death, S.O.B. etc.

So tell us about starting the band , why you started it, and at the time this all started did you even consider yourself a band?

Previously I was playing in a Death Metal band which disbanded before recording anything and I got tired of working with/depending on other musicians who lacked motivation. I got into some legal problems when I was a minor and was on probation with strict conditions to even leave the house much. At that time I was just getting into tape trading and discovering a (at the time) totally new approach to releasing and promoting music. I obtained a 4-track recorder and that enabled me to write, record, release and distribute the 1994 self-titled demo without the burden of having to rely on any other person. So it was a solo project, you could say. I never looked at it as a band or solo project, Crimson Moon started more as an entity for me personally. 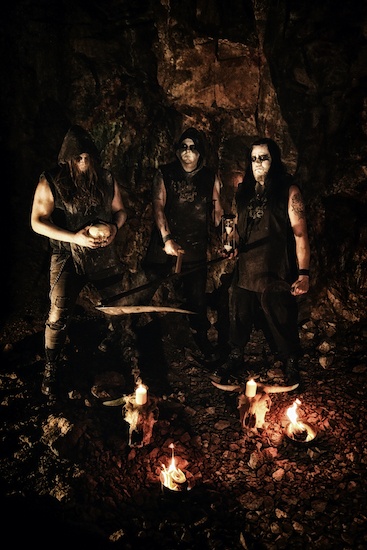 As the lyricist of the band what are your lyrics based on ? What inspires you and what studies go into writing your lyrics?

The lyrics are primarily covering topics on the occult, mythology and nature to answer briefly. In the past it was a lot of reading within occult literature and mythology, where over the years it’s gone more into a personal exploration of experiences which is heavily inspired by a lot of time spent in nature.

What are your views on Christianity VS Satanism and where do you fall in between the two?

It’s not something I am interested in or waste time on really thinking about.

Tell us about the early days of the band back when it was you and Nocturnal Overlord — what was your collective vision for the band?

There wasn’t really any collective vision as he didn’t do much more than play guitar for the period of time he was involved. His role eventually led things more into a hiatus than anything, and he ended up being a burden that was removed later than he should have been. If he had any sort of vision, it ended up to be something completely different than mine.

How did you circulate your material and whose interest did you catch?

The material was circulated entirely through the mail back then. There wasn’t any scene in California or the US really at that time save for some bands very spread out through the US. So there were no concerts, and very little for record shops to carry the material, etc. It was all mail order distros/labels and doing a lot of mail correspondence spreading fliers, trading and networking the old-fashioned way. 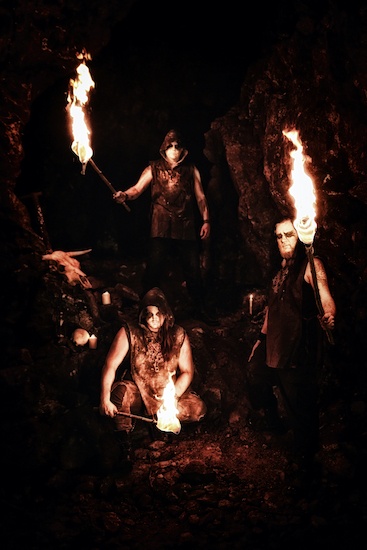 When was your first performance and how did you present yourselves as far as stage presence?

The first performance was in 2006 for a small series of shows in the US and Mexico, followed up by another small North American tour in 2007, and then it was not until 2017 we began to perform live again in Europe and continue to do so. There is a definite and huge improvement in the live shows and presence since then and footage from the past and recent shows are easily found online.

What personal meaning does face paint have for you?

It is a physical, symbolic act to enter a certain state of consciousness that coincides with the music and live performance.

Please clear up for us what happened with Nocturnal Overlord? We are very confused, often seeing two Crimson Moons.

There has never been “two Crimson Moons”. There is Crimson Moon and an ex-guitarist who makes pages on social media claiming he has his own version of the band which has not released a single note of music. The guy is bitter after getting kicked out and it’s just a feeble attempt to taint the name. It takes very minimal research to see these facts, so there is no need to further elaborate.

What is the current line-up of the band and are you all from the same area?

Yes, the guitarists Sabnoc and Agreas both live fairly close by, and since recording the last album Mors Vincit Omnia the session drummer at the time, Blastum, has become a permanent member of the band, and resides in France. I could not be more content with the current line-up. We have another concert to perform this Saturday and after that our drummer will be staying here for a while to begin working on new material as our focus towards a new album will now take priority over playing live. 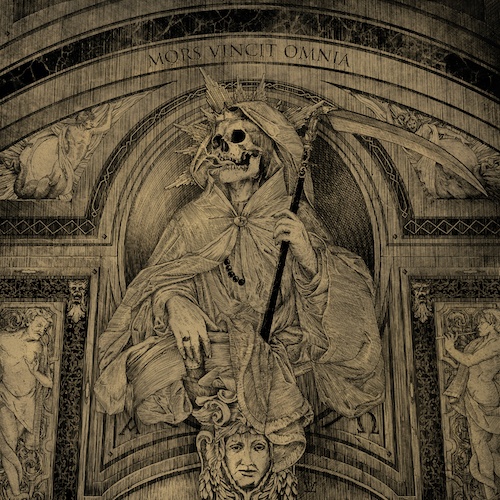 In August of 2019 you released your latest album Mors Vincit Omnia with, as you mentioned, drum-work from Blastum (AOSOTH, ANTAEUS). Guest vocalists on the album include Proscriptor (ABSU), Lord Angelslayer (ARCHGOAT), Ixithra (DEMONCY), and Phaesphoros (KAWIR). Tell us about the title of the album and the nature of the lyrics throughout.

The title means “Death Conquers All” in Latin. The lyrics are entirely about Death in many different aspects. It has recently come to my attention that the lyrics don’t seem to be available online for whatever reason, including places like Metal Archives, so I guess without owning a physical copy of the CD or vinyl it is not possible to fully delve into the lyrics other from what can be understood by listening to them.

Now recently we are hearing of a new release from you and in the form of a cassette. What can you tell us about that?

At the moment a cassette edition of the 2016 album Oneironaut is in production, which is not new material. We will be continuing to release all of our material in cassette format as well as vinyl as there has been a definite demand for it and it is a format I have an appreciation of.

In closing Scorpios, tell us what Black Metal represents to you.

The easiest way to explain it would be the complete opposite of what it has become for the masses. I guess you could say I am stuck on the older ways of thinking when it comes to black metal.