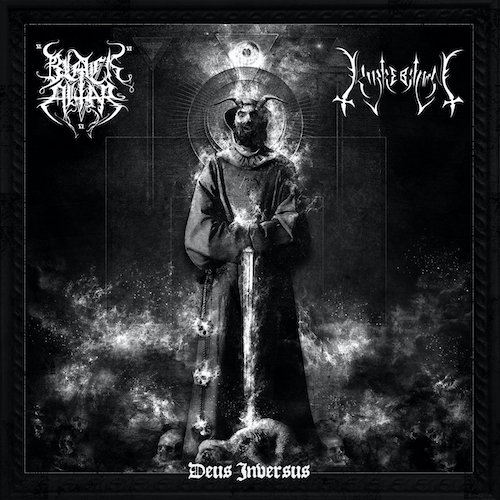 All devoted fans of black metal well know that it encompasses a broad range of variations, even among bands who maintain links to its earliest days. Even the bands who originated the first and second waves did not all follow the same path in the music they made. Truth be told, despite the rigid dictates of some hidebound fans and the debates we could have about when a band has crossed over into territories that don’t merit the name, the variability of black metal is one of its enduring strengths.

What we’re presenting today is proof of that assertion — a split by two abundantly talented groups who are unmistakably black metal bands but who each have their own distinctive approach. Both of them are capable of mounting hostile, diabolical assaults, to be sure, but each of them brings a lot more to the table than blasting fury, and the differences between those other ingredients makes this new album-length split a great one to pick up.

The bands are Black Altar from Poland and Kirkebrann from Norway. Their split is named Deus Inversus, and all the tracks are new and exclusive to this record. It will be released by Odium Records on June 30th, and today you can hear all of it — preceded by our thoughts about what each band has contributed. 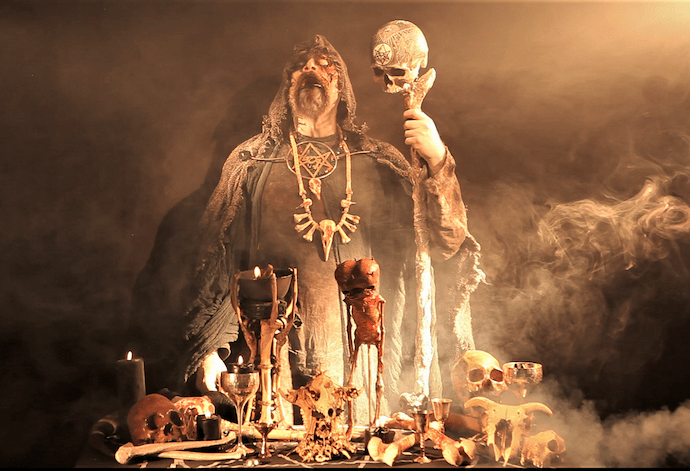 Black Altar have been releasing music since 1998, assembling a discography that now includes two full-length albums and an assortment of splits and EPs. For their half of this new split the musicians include Lars Broddesson (Funeral Mist, ex-Marduk), Mauser (ex-Vader), and Alexandros (Macabre Omen), led Black Altar‘s founder Shadow. Mauser was also responsible for Black Altar‘s production. Their tracks consist of two multi-faceted but relentlessly exhilarating songs, and an outro that dramatically changes the mood.

In “Deus Inversus“, which shares the name of the split, hammering blast-beats, thrusting bass, and waves of writhing and gloriously flaring guitar provide the backdrop for scalding shrieks of blood-freezing fury. Darting notes, sweeping melody, and soaring choral voices — together with vicious, warlike riffing — accent the tremendous firebrand intensity of the music, which the band drive to further heights by even more maniacal percussive blasting, ecstatically wild soloing, and fierce vocal proclamations. The riffs continue to morph, phasing between sensations of chilling menace, dark swirling beauty, majestic bombast, and savage violence.

Launched with a more rocking cadence and mysterious and magical arpeggios, “Ancient Warlust” converts to an amalgam of piston-pounding drumwork, boiling guitars, and throat-ripping snarls and screams. The song also channels a feeling of sweeping, panoramic grandeur while also bringing into play head-hooking beats and fanfare chords, as well as feelings of savage, blood-lusting frenzy — all of it marked by possessed vocals that hold nothing back. Like “Deus Inversus“, “Ancient Warlust” is a multifarious and tremendously thrilling track.

Black Altar‘s side of the split closes with an ambient “Outro” track that turns down the intense heat from the two songs that precede it, creating an atmosphere of celestial wonder and the chilling mystery of a boundless, void-like expanse, within which sinister gasping exhalations can be heard. 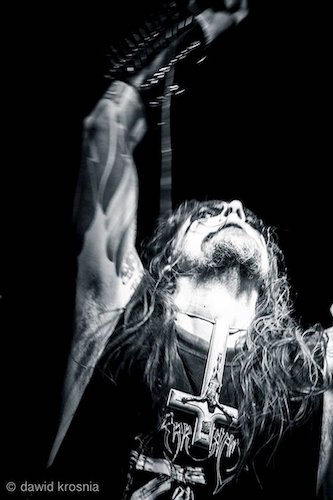 Kirkebrann’s assembled discography is more limited than Black Altar‘s. It begins with a 2011 demo and further includes a 2013 debut album and three splits, including this one. Their side of Deus Inversus consists of three main tracks and an outro of their own — which proves to be markedly different but just as attention-seizing in its own way as the songs that precede it. The production was handled by Morfeus (ex-Limbonic Art).

Anchored by a compulsively head-moving bass-and-drum rhythm, “BegrensaBevissthet” introduces electrifying thrashing riffs, but the sound becomes more brooding and menacing as the scorching vocals come in, a feeling that’s underscored by a buzzing, searing lead. The music also creates a feeling of mystic black sorcery through scintillating guitar leads and flashing solo work, and the rhythm section continues to provide an electrifying, body-moving pulse, constantly shifting the rhythmic patterns as the guitarists spin out one mind-bending swirl after another.

“Faux Pas” is another black-rocking piece, but more carnal, creating an expression of sinister lust — though the song segues into an atmosphere of mystery through shimmering chords and stately drumming. The soloing is also mesmerizing, and adds to the feeling of esoteric spellcasting that threads through the song. It’s like the soundtrack to a ritual that depends upon copulation.

Kirkebrann continue to change things up with “Et Nederlag“, fusing hammering drums and tremolo’d guitar savagery, whose melody seems to straddle a line between menace and desperation. But the song also rocks out, without diminishing the feeling of sinister threat, and includes rapidly flickering solo guitar performances that are glorious and heart-lifting (but a bit feverishly deranged too). It’s a completely enthralling song, one that ends in the pounding of a heartbeat that spills over into Kirkebrann’s own outro piece.

That piece, “Ufødte Klarhet“, is a layered acoustic performance that’s bright and beautiful, with a folk-like, medieval air in the melody. It’s a sharp departure from the preceding tracks, but definitely not a throw-away track. It’s wonderful!

And with that we’ll leave you to enjoy this split in its entirety. Odium Records will release it on digipack CD and two vinyl LP formats, as well as digitally. The diabolical cover art was created by the very talented Nestor Avalos.

One Response to “AN NCS SPLIT PREMIERE: BLACK ALTAR AND KIRKEBRANN — “DEUS INVERSUS””