(Here is DGR’s review of the latest album by Finland’s Wolfheart, which is out now on Napalm Records.)

If you’ve been following, with …And Oceans and Feastem having gotten reviews, Wolfheart marks three from Finland that had been hanging out in the backlog pile.

With the April release of Wolves Of Karelia, it is clear that by their fifth full-length album — their second for Napalm Records after their couple on Spinefarm — Wolfheart have found a pretty solid niche for themselves. Performing epic-length hybrids of folk metal, melodeath, and a very light airing of the sort of ice and melancholy that affects their region’s branch of the doom metal tree, Wolfheart have for some time now been the ultimate representation of frontman/guitarist and project owner Tuomas Saukkonen‘s musical consciousness.

In fact, up until the release of this year’s Dawn Of Solace album Waves — arriving nearly fourteen years after that group’s previous disc — Wolfheart has been his only project for the last seven years and was consistently dishing out enjoyable music, Wolves Of Karelia included (for the early spoiler), on a nearly two-year interval. Other than the addition of new guitarist Vagelis Karzis into the band’s ranks, Wolfheart remain largely unchanged from when they became a full group rather than just a solo project. 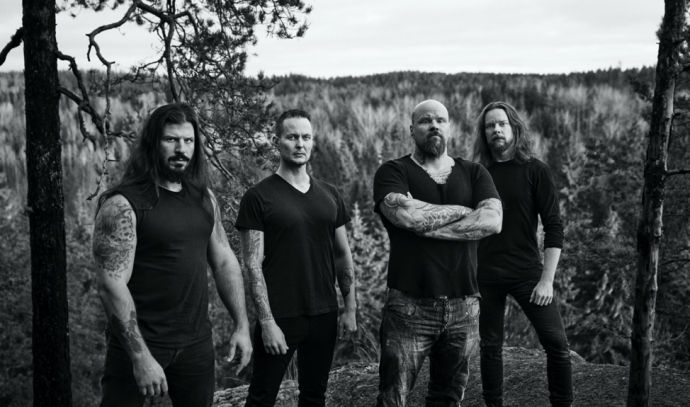 Outside of being an enjoyable disc though, Wolves Of Karelia could easily kickstart the discussion of exactly when Wolfheart really found their groove and how they’ve been slowly hammering away at it since then. It also may have the most Wolfheart-esque moments possible for the band thus far.

Wolves Of Karelia contains not one but two songs with fire in the title, one referencing the result (“Ashes”), and a multitude of sonic booms throughout each song in order to accent it. Wolfheart have established a visual musical identity throughout all their music videos of a band being surrounded by fire and all sorts of explosive pyro hits, so it’s only fitting that they’ve begin writing their music to match. It’s a weird situation, but ‘long about the third or fourth large boom added to accentuate the next big, moving segment of “Horizon On Fire”, you start to notice just how comfortably good Wolfheart have gotten in surrounding themselves with flame and writing epic, sweeping melodeath anthems with a very light flavoring of folk metal throughout the whole thing. Add in some light shades of atmosphere and a tiny bit of doom to season and you kind of have the Wolfheart formula — perfect for about forty minutes of music, serving eight songs with at least one fairly pensive acoustic number to even things out.

The first two songs could almost be a summation of Wolfheart’s career as a whole, as well as a fantastic ‘welcome back’ party for their listeners. Every release seems to have an unstated goal of presenting a couple of songs that combine the group’s aspirations for soaring melodeath, sweeping keyboards in the background, and melodies ranging from beautiful to the ugly guitar chug meant to evoke the striking of a hammer. The “fire and steel” aesthetic is one Wolfheart have fully made their own, so the opening songs “Hail of Steel” and the previously mentioned “Horizon on Fire” are almost perfect.

Sure, there’s been a shift in the band’s lineup, but things haven’t changed that much. Where things get interesting is Wolves Of Karelia‘s third song “Reaper”, whose somewhat discordant keyboard melody and continued descent into death metal over the course of the song is a sudden shift from the ‘to battle’ that is often the early part of a Wolfheart album. Instead you’re getting the heavy death metal obsession and a more forceful cry of ‘to misery!’, the band’s frosty musical subtext quickly becoming the boldfaced headline for this script.

Another interesting spin on the Wolfheart sound is the meat slab that is “The Hammer”. The band’s obsession with tools and forges continues unabated on Wolves Of Karelia, and “The Hammer” is the latest example — they even filmed a music video for it if you’re interested in what the studio work for the song looked like. “The Hammer” is something of a sibling to “Reaper” in that it is an immensely dark song. It’s one of the longest on the album, and also the main, driving riff is about as guitar chug as they come. Wolfheart have made the musical equivalent of a hammer’s downswing in a rhythm part and make full use of it, in between the group’s bread and butter of blasting drums and vast keyboard melody painting the landscape in the song’s opening.

“Born From Fire” — the second of the ‘fire’ siblings on Wolves — is a little bit more subdued in comparison to its sibling’s delusions of grandeur. It moves with the deftness of many a Wolfheart track, huge part to gargantuan bridge to massive chorus. If Wolfheart have become experts at anything, it’s throwing their musical weight around so that the songs all sound much larger than one would assume four dudes might dish out at first glance.

The one and a  half or so years between releases have done Wolfheart some good: They feel a little less stretched thin on Wolves Of Karelia, but this is also the most comfortable within their own musical formula the band have been in some time. I posit that this album may be the one where people really recognize that a blueprint for the band has been established, especially considering just how many of the song titles and subject matters here tread in similar waters as Wolfheart’s past releases. They know how well a large battlefield style song works for them, and when they’re not painting a gigantic musical landscape, they’re playing up personal struggles so that the inner battle resembles a much larger and fiery fight.