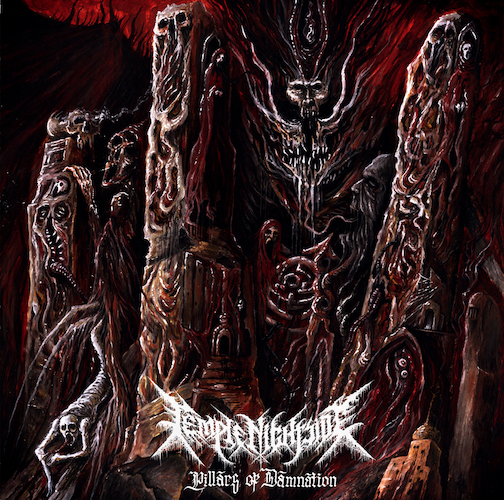 Now approaching the end of their first decade of activity, Australia’s Temple Nightside have firmly established themselves as a nightmarish force of nature — though it’s perhaps more accurate to characterize their brand of blackened death metal as a terrorizing radiation of supernatural power. Dense, destructive, and domineering, their music has also seemed to be the stuff of necromantic ritual, a form of arcane pitch-black incantation which draws its eldritch energies from the shedding of blood on a massive scale.

Temple Nightside‘s dedication to crypt-born, blood-freezing death metal punishment has been unflinching over the course of their first three albums and assorted shorter releases, but their music has not remained static. Their forthcoming fourth album reveals further dimensions of sound, though without retreating even one small step from the ferocious forward momentum of their warlike ravages.

That new album, Pillars of Damnation, will be released by Iron Bonehead Productions on August 7th, and the song we’re premiering today — aptly named “Wreathed In Agony” — is a vivid sign of the latest permutations in Temple Nightside‘s decimating evolution. 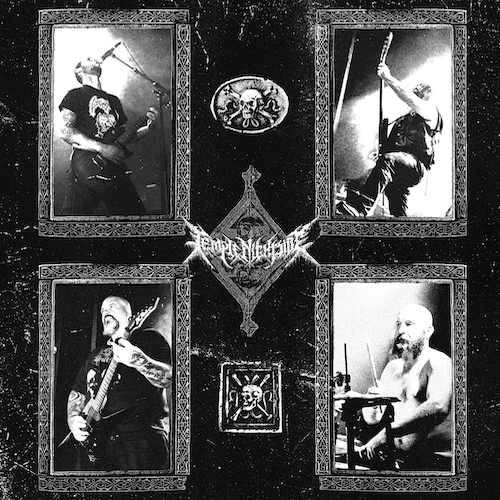 The music here is pulverizing and steeped in the murk of pestilential malignance, yet as you’ll discover, its movements are also taut and blade-sharp, and the band also succeed in creating an atmosphere of horrifying grandeur.

The song is almost suffocatingly oppressive in its opening, as the band combine deep, distorted riffing, enormous grinding bass tones, and brutally battering drums. The riffing rises in a semblance of immolation as the mutilating howls and grotesque roars become unhinged shrieks, and the guitar flares in rapid bursts of rabid frenzy. There is an eerie pulse within the music that persists even when the drumming slows into explosive detonations and then lashes at the listener’s neck in a more measured cadence, and the wailing, quivering, and ultimately berserker solo channels sadistic madness — and propels the music to even greater heights of terrifying chaos and cruel, imperious majesty.

This track is the second one to be revealed so far from Pillars of Damnation. The first one, “Death Eucharist“, is also a sign of Temple Nightside‘s evolution and of the fact that Pillars… is not an undifferentiated mass of slaughtering barbarism. To be sure, “Death Eucharist” is a roiling maelstrom of savagery and despair, the boiling riffs seeming to be a kind of call and response between the heartless ministrations of a fervent torturer and the utter degradation of his victims. The music hurtles and ravages and jackhammers the spine — but it also becomes a solemn and horrifying death march that matches a skull-fracturing drum cadence with monstrous roaring vocals and grand apocalyptic chords, a decimating calamity in which filaments of melody scream in wretched dismay.

Iron Bonehead will be releasing Pillars of Damnation on CD and vinyl formats on August 7th. Keep an eye on these locations for further news about the album and how to acquire it.

2 Responses to “AN NCS PREMIERE: TEMPLE NIGHTSIDE — “WREATHED IN AGONY””