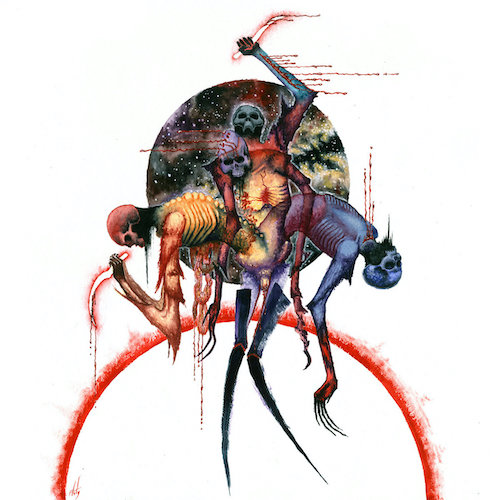 We almost never cut-and-paste from PR material for music we choose to feature here. That’s a sign of laziness, and it by-passes the fun (and the challenge) of trying to come up with our own descriptive formulations. But here I can’t resist sharing some of the words that accompany I, Voidhanger Records‘ promo for Xythlia‘s debut album, Immortality Through Quantum Suicide, because they’re so spot-on:

“The solo project of US multi-instrumentalist/singer Nick Stanger (also active in the ranks of black metallers ASHBRINGER), XYTHLIA brilliantly blend the most extreme tech death/grind metal with VOIVOD‘s progressive/experimental approach and the mind-shattering guitar acrobatics of KRALLICE and OCRILIM. Immortality Through Quantum Suicide, the band’s first album is as creepy and weirdly fascinating as Carlos Agraz‘s stunning cover painting, where an alien creature performs a suicide ritual through the space/time continuum, furiously stabbing itself to death. It’s a cosmic self-murder, an outer-dimensional bloodbath, each blood drop a seed destined to spawn new and abhorrent life forms.”

When you hear the music on the album you’ll understand just how on-point that introduction is, and just how how well the explanation of the cover art fits with the music — because Xythlia does indeed sound like the soundtrack to “cosmic self-murder, an outer-dimensional bloodbath, each blood drop a seed destined to spawn new and abhorrent life forms”. And you’ll also realize how well the strange but intriguing song titles match up with the sounds.

What we have for you today is the premiere of not one but two tracks from this magnificently insane new album, presented through a player that also gives you the chance to hear a previously released track. And although I will attempt to meet the challenge of coming up with my own linguistic impressions, here’s one more fitting excerpt from the PR material:

Okay, now it’s time to rise to the challenge.

The first of the new tracks we present today, “Ablation of Subconscious“, greets unsuspecting ears with bursts of thumping drums, low humming bass, and eerie, dissonant arpeggios that become increasingly frenzied and deranged as the bass itself throbs in a fever. The vocals straddle a red-throated line between a growl and a scream, but sound as unchained as everything else. The music clangs with cold-blooded brutishness, boils the brain in flurries of demented fretwork, and uses start-stop segments in the momentum to shove you off-balance. It has the electrifying energy of a nightmare from which you wake in a cold sweat.

The intriguingly named “Schrödinger’s Foreskin” is, if anything, even more bizarre. The jet-fueled arpeggios are a rendering of fractured sanity — darting and shivering, swarming like vicious insects, gibbering like a sidewalk prophet who belongs in an asylum, and flaring like fireworks. The rhythmic interplay is equally wild and unpredictable, as intricate and mind-boggling as the mad carnival created by the fretwork. But as twisted as the music is, again augmented by berserker bloodlust in the vocal department, there’s a feeling of ebullient exhilaration in these sounds — ecstasy run rampant in the asylum.

The player below will then take you right from “Schrödinger’s Foreskin” into the previously released track “The Eye Bath“, which carries forward the mad intensity of the preceding track. Again packed with weird and wondrous guitar manipulations, the music flickers and screams, emits exuberant, freakish cries, and mewls in mutilating and spiraling tones (up and down it goes). The bass resembles an overdriven pulse fueled by a surfeit of adrenaline, and the drumming continues to maniacally leap about but periodically locks into punishing fusillades that furnish grooves beneath the cavorting fretwork.

How in the world did this music come into being? Here’s what Nick Stanger tells us: “When quarantine started, I had nothing but time to kill with a myriad of frantic uncertainty and anxiety,” Stanger explains; “this record is a reflection of that. It’s a concept album that follows a character experiencing the full extent of isolation throughout infinite time.”

All of the songs within this compact 23-minute album are indeed conceptually connected, though in today’s presentation you’re obviously missing many of the connected piece. But trust us — the whole boundary-pushing experience is like little else you’ll hear in the cavalcade of this year’s releases.

Nick Stanger not only performed vocals, guitars, bass, and drum programming, he also engineered, mixed, and mastered the record. I, Voidhanger will release it on August 21st, and recommends it for fans of Spawn of Possession, Krallice, Gorguts, Cattle Decapitation, and Indricothere.

One Response to “AN NCS PREMIERE: A PAIR OF TRACKS FROM XYTHLIA’S “IMMORTALITY THROUGH QUANTUM SUICIDE””