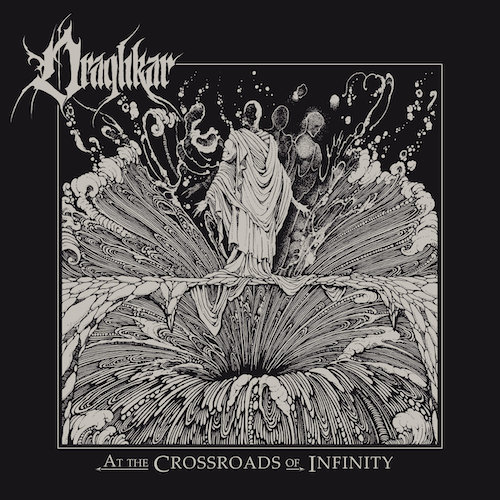 At the Crossroads of Infinity is a lofty title for what turns out to be an ambitious album, a multi-faceted work of savagery and wonder, of awe-inspiring spectacle and wide-ranging emotion that sinks deep into bitter soil as well as extending its grasp out into the mysteries of the cosmos. That album is the debut full-length of the death metal band Draghkar, which will be released on July 27th by Unspeakable Axe Records, and today it’s our privilege to present an exclusive stream of the title track.

We also had the pleasure of premiering the band’s last outing, an eye-opening 2018 EP named The Endless Howling Abyss. Since then the band’s founder, southern California guitarist Brandon Corsair, has assembled a new line-up around him, which features a lot of well-known names in the metal underground, including vocalist Dan Butler (Vastum), guitarist K.S. Kuciemba (Drawn and Quartered), drummer Phil Segitho (Ecferus), and bassist Cameron Fisher. Together, they provide a powerful complement to Brandon‘s guitar performances and songwriting. 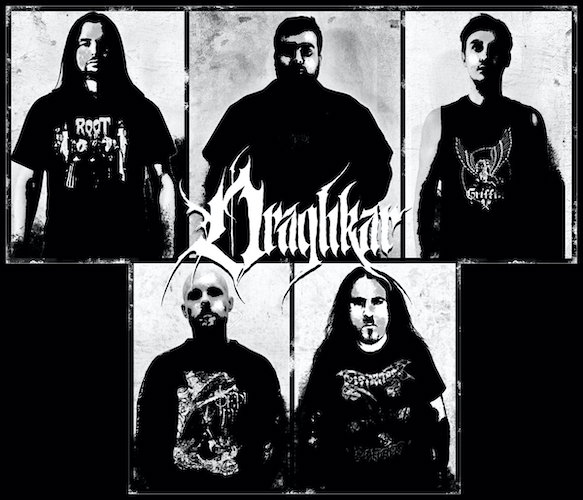 He tells us this about the song we’re presenting today: “The title track of our upcoming debut concept album tells the closing of the tale of a man who lived too many lives. It begins with a brief tribute to Mark Shelton, who remains one of the most profound influences on Draghkar, and runs through some of the most epic and creative material on the album, concluding with a mournful synth piece arranged by our good friend TG (Altar of Gore, Massive Retaliation).”

Like the album as a whole, this song is an evolving and multi-dimensional experience. Mid-paced at first, the track spins out a weird and beleaguered melodic harmony over a gloomy yet intriguing bass pulse and a skull-cracking drum rhythm. As the drums begin to thump with greater vitality, that opening melody flares upward in frighteningly glorious tones and Dan Butler magnifies the building storm with his distinctive, monstrous growls.

The riffing begins to mercurially twist and pulse, and an early solo swirls the music toward even greater heights of frightening and otherwordly intensity as Butler elevates his voice into vicious snarls and rabid howls. The music continues to elevate in a display of chilling ecstasy but then collapses into a morbid, preternatural crawl. The guitars gleam and slowly drift like lost spirits above graveyard earth, a final prelude to a resurgence of the music’s weird and wondrous ebullience and the advent of a concluding passage in which the music channels unearthly menace and hopeless misery (a passage accented by a febrile bass solo). It’s a change that’s mesmerizing despite its dark and chilling qualities, and becomes even more haunting in the song’s astral synth outro.

Below you’ll find pre-order links, and we’ve also included a stream of the previously released song “Beyond Despair, The Dawn Of Rebirth” along with our own premiere.