(In this post Andy Synn reviews the debut album of the Argentinian band Ataudes, which was released on May 25th.)

Following on from yesterday’s trip to Chile today we’re hopping across the border to take a look (and a listen) at Argentinian duo Ataudes (Cristian Viegas and Jonatan Zarate), whose promising debut album delivers a mix of deathly intensity and blackened bite strongly reminiscent of early Extol. 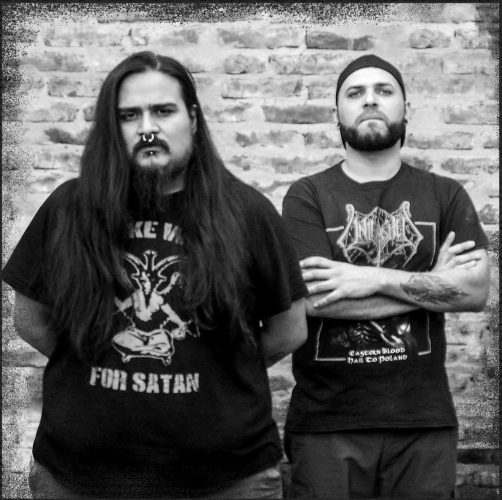 That’s not an attempt to minimise or belittle the pair’s efforts by any means (for one thing I’m a huge fan of Extol, so it’s cool to see/hear a band hitting some similar beats), but it’s impossible to deny that once you’ve made the connection – and the electric riffs and Espevoll-esque vocals of “En Descompocisión” make it very clear very early on – you’re not going to be able to un-hear it.

Thankfully Merecemos la Extinción has a fair bit more to offer than being a carbon-copy of Norway’s most underrated sons, as while Ataudes don’t go anywhere near as proggy or melodic, they compensate by building in a bigger, beefier Death Metal backbone, with tracks like “Su Santidad” (one of the most keenly catchy and lethally infectious DM tracks I’ve heard so far this year) and “Nos Merecemos La Extinción” erring more towards the Morbid Angel, Dismember, Blood Red Throne side of things.

That being said, as the album moves into its second half the resemblance to classic Extol once again rears its rugged head, and there are multiple moments – the thrashy aggression of “El Mundo Es Un Lugar Horrible Y Solitario”, the marriage of bristling tremolo and bleak, chiming melody during the second half of “A Traves del Umbral del Dolor”, the sinuous transitions between riffs during “El Fracaso de Estar Vivo” – which wouldn’t sound out of place on Burial or Undeceived.

Some may take issue with the fact that this review has spent a fair bit of time focussing on comparing Ataudes to other bands, but the truth is that, at this stage, such comparisons are both a compliment and something of a necessary evil.

Because while it would be foolish to suggest that what Viegas and Zarate have created here is in any way unique – hence the various nods and name-drops above – it certainly wouldn’t be wrong to say that their potential is right up there with some of their more famous forebears, and I for one hope to hear a lot more from them after this!