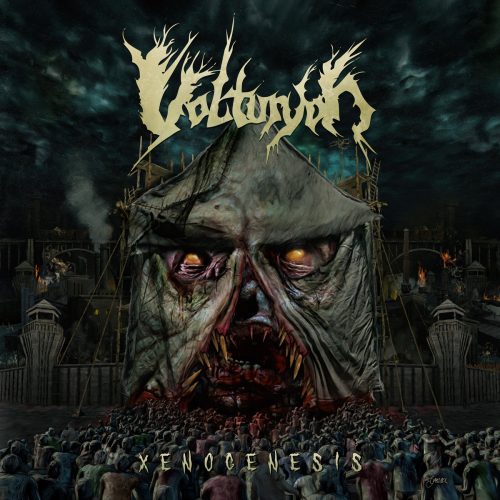 (DGR reviews the new album by the Swedish death metal band Volturyon, which ViciSolum Records will release on July 24th.)

When it comes to death metal out here in our private corner of the far reaches of the internet, we’ve often found our fair share of comfort in the caveman-striking-rock aspect of the style. We’ve celebrated this ideal as being appropriately ‘stupid’ and embraced it. If you’re looking for chin-stroking and thought-provoking versions of the genre, you can look at other groups, and we’ve done our best to warn you what you’re in for, early on in our reviews, when it comes to those more primitive assaults. Sometimes, it’s been tempting to just post album art and have a review play out as the written equivalent of the Dead dove do not eat scene from Arrested Development.

The death metal collective Volturyon fall firmly in the caveman camp musically, although the band are a decidedly more modern take on the blastbeat-happy chainsaw riffage of current death metal than they are the classic hammering thud of death and roll – yet you can glance at the group’s collected album and EP artworks over their career and have a pretty good picture of what the crew sound like.

Which is why it’s nice that on the group’s newest album Xenogenesis – their first with vocalist Mikko Voutilainen handling monster noise duty – there are a handful of nuanced and subtle takes on current world events, approaching issues from a multitude of angles, recognizing the grey area that is often called ‘the truth’, and speaking on the economic impact these sorts of things can have on the…. just kidding. There’s a song on here called “World Pandemic” and if you’ve glanced at the album art and remembered what we were discussing in the opening paragraph then you know exactly what the song (and from a broader perspective, the musical stylings of Xenogenesis) are going to be about. 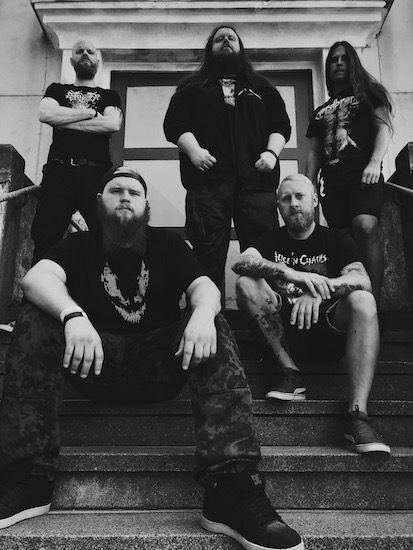 Xenogenesis follows the recent trend of albums having absolutely zero introduction, starting at top speed for its opening song to grab the listener and then jostling them around for a few afterwards just to make sure you’re getting the message. What was unexpected was how much the opening of Xenogenesis calls to mind the group’s 2014 EP Human Demolition with its first song. Human Demolition has an intro in place but the actual first bit of music is very similar in its quick-moving and violent opening assault.

There are other moments throughout Xenogenesis where it seems the band found themselves in a similar writing mood to that EP in the four years between albums, more so than on that EPs immediate successor Cleansed By Carnage. “Bloodsplattered Banner” keeps things tight and punchy as an opener. There isn’t a single song on Xenogenesis that crosses the four-minute mark, and “Bloodsplattered Banner” is the one song that doesn’t even bother to cross three minutes – with its opening cacophony quickly giving way to a solid percussive groove.

Volturyon establish early on that a lot of Christian Netzell‘s drumming is going to be a consistent and constant attack throughout, so they have the drums coming through clear as day this time around. The treatment that the drum kit gets during the opening song remains a backbone of much of Xenogenesis‘ songwriting, and like “Bloodsplattered Banner” it is plenty happy to give way from neck-snapping groove to depth-charge blasting at the drop of a hat.

“Mother” on the other hand – armed with a simple title and the honor of being Xenogenesis‘ longest song at 3:55 – is an early album highlight. In contrast to the majority of Xenogenesis, “Mother” is built around one gigantic and thumping groove. It’s the giant monster film of songs in comparison to the rest of the disc – the blast apocalypse that Volturyon love to write. Instead, it’s the constant chug of the song that stands out, painting each movement as one big and lumbering step. Sandwiched between the more traditional blastfests of the album’s opening song and its title track – which plays out like a parallel universe version of that opening track at times – “Mother” and its early slow-down helps keep things interesting in those first minutes of Xenogenesis, without overstaying its welcome or starting to drag. It isn’t until the mid-point of “Catharsis” in the back-half of Xenogenesis that the stars of ‘wonderfully demented’ and ‘joyfully stupid’ align again for that perfect lightning-in-a-bottle moment the same way they seem to for “Mother”.

Volturyon don’t stray too far from their previous releases otherwise with Xenogenesis – you can see early on the natural throughline between all of their albums to date. It slots in naturally right next to their Coordinated Mutilation and Cleansed By Carnage full-lengths, feeling like a continued extension of where the crew were sounding musically alongside their Human Demolition EP. The thing that makes Volturyon work isn’t that they’re pushing tremendously hard at boundaries, it’s that they’ve mastered the chainsaw guitar buzz and rhythm section pummeling as if it were no great feat, and so every release finds a steady median early on and becomes a sizeable serving of that exact sound.

Xenogenesis especially is a beefier dish for that reason. It’s not their longest release, but each of the eleven songs is tightly packaged together and neatly cut off, as surgical as a death metal bludgeoning can get. It’s hard not to give into the faster headbangers of songs like “Void”, “The Demiurge”, “Xenogenesis”, and the aforementioned opener “Bloodspattered Banner”. Likewise, we must acknowledge just how much room the band have given themselves to groove in songs like the previously mentioned “World Pandemic”, “Invisible Abomination”, “Mother”, and “Memoirs From The Morgue”. It’s the combination of those two styles and how often the band are willing to shift between the two – even within a song itself – that makes Volturyon’s latest such a fun listen.

Yes, going into it blindly while only knowing the album art and tracklisting can be your ‘I don’t know what I was expecting’ moment, but Xenogenesis serves up song-bludgeoning after song-bludgeoning, and the fun to be had while listening to it and headbanging along is undeniable.