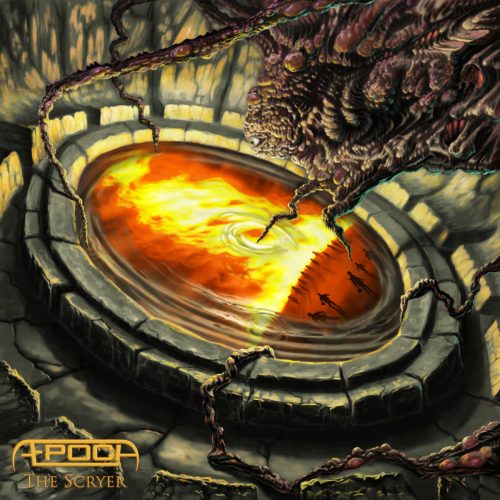 A little more than two years on from the release of their Awakening Inception debut album, the Ontario-based death metal band Æpoch are on the verge of releasing a new EP named The Scryer, a six-track, 30-minute offering that diverges in some ways from that full-length debut. The band themselves state that when these songs were originally written, their main influences were Death, Through The Eyes Of The Dead, and Abysmal Dawn, and they pursued musical ideas that were “much less progressive and technical than our more recent influences”.

But these are relative comparisons, because The Scryer is still home to a lot of full-throttle technical virtuosity and an unmistakably adventurous instrumental spirit. Yet the EP’s appeal also significantly derives from its exotic melodic qualities, which provide a unifying theme throughout this extravagant thrill-ride of an EP.

Today we’re happy to present a full stream of The Scryer in advance of its July 31 release, along with some detailed notes about what you’re about to hear.

Make no mistake, this really is a thrill-ride that will get your blood pumping and your head spinning, and may wind up conjuring Tales of the Arabian Nights in your mind. It’s a cavalcade of fast-changing instrumentation, murderous vocals, and both pyrotechnical guitar soloing and equally riveting fretless bass solos. But that’s not how the EP begins.

Instead, the band first beckon the listener forward in a more subtle and seductive fashion with a rippling acoustic guitar instrumental that’s classically influenced. That opening track, “Devil Twin Pt. I: The Birth of a Demon”, has a mysterious and magical aura, and a hint of melancholy. But it’s Part II of Devil Twin — “The Death of a Man” — that really provides a more accurate preview of what lies ahead.

That follow-on track hits the listener with a seething riff, neck-popping snare beats, and savage growls, roars, and screams. The fast-paced music then blares and jolts, swarms in a maniacal frenzy, and exotically sways like a hooded serpent. The Arabian-influenced melody gives the song an unusual air, and it becomes dervishlike in its whirling intensity, thanks in part to a fret-melter of a solo.

There’s no real abatement in the energetic intensity of the EP from that track forward. The title song launches with jittery fretwork and a screaming solo and segues into a sequence of darting and swirling arpeggios backed by rapidly changing drum fills and galloping bass tones. At least to these ears, there’s still an Arabian resonance to the melody, and the song becomes a rich cornucopia of connected riffs. But it also includes a burst of jackhammering groove which paves the way for another blaze of soloing fireworks that builds in extravagance — and near the end, the song becomes downright crazed and chaotic.

At this point the band embark upon the EP’s longest track, “Shrapnel Baptized”, which opens with a thrashy riff segmented by bursting chords and eventually by a mewling bass solo. The jagged and jarring grooves in the song persist, and the music is again accented by a fire-breathing solo, which shares in the Eastern melodic flair of the song as a whole. The song is wild and frenetic, boisterous and battering, but the skittering guitar work in the track also creates an atmosphere of vicious menace.

The rapidly darting dual-guitar fever in the song also builds a feeling of increasing tension and mania, and the music’s aspects of derangement get a big boost from yet another pair of eye-popping, jet-speed solos. Near the end, that feeling of swaying reptilian menace surfaces again, capped by a final guitar solo that’s both sorcerous and searing — and it’s paired with an intoxicating bass solo.

As if the EP’s energy weren’t already intense enough, “Ozonihilation” ratchets it up even further with an onslaught of insectile-swarming riffage and pile-driving grooves. The song grows increasingly unhinged in its speed and intensity. The changes are still sharp and technically impressive, but the music nevertheless seems berserk, with all performers going at tremendous speed (the drumming sounds authentically like a machine-gun firing at maximum velocity). The drummer does eventually adopt a more measured pace so as not to steal the spotlight from the spellcasting fretwork gymnastics, and the song also includes yet another mesmerizing bass solo, as well as the by-now-eagerly anticipated guitar shred, and a swirling and jackhammering finale.

The album closes with “A Brainwashed Civilization”, which combines fast-darting and seductively sinuous guitar performances as well as fanfare chords, incendiary solo work, spine-snapping rhythmic assaults, salvos of highly weaponized drumming, and a general air of furious glory. Swirling arpeggios and vividly humming and bouncing bass notes intertwine to bring to the fore once again a sensation of magic that combines with the whirling-dervish energy of the song to create a pulse-pounding spectacle. And after you’ve come this far, what else would you expect?

The Scryer will officially be released on Friday, July 31st, on CD and digitally, with related apparel. Pre-orders are available now: