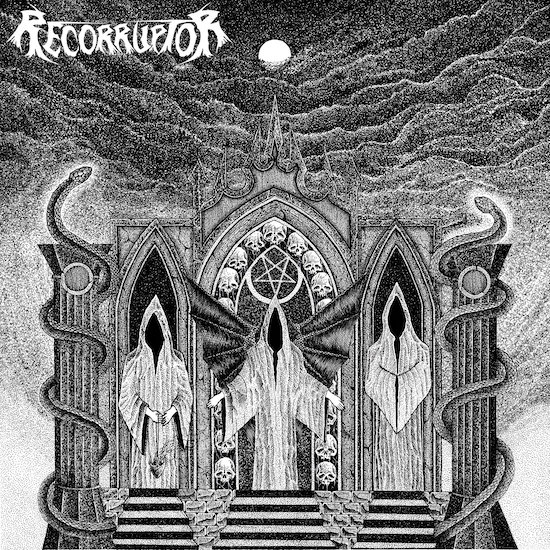 On the 21st of this month the death metal band Recorruptor, who are based in Lansing, Michigan, will release their second album The Funeral Corridor, which follows their well-received 2017 debut full-length, Bloodmoon. Pulling from inspirations both old and new, they’ve created a brace of well-conceived and well-executed songs that collectively make for a dynamic experience, showing themselves capable not only of discharging sensations of monstrous menace and electrifying savagery but also packing their onslaughts with melodic and rhythmic hooks that dig deep and are difficult to dislodge (even if some of them are seriously unsettling).

We have a prime example of these talents in the song we’re premiering today through an official video, a track named “Moribund” that’s pure undiluted evil. 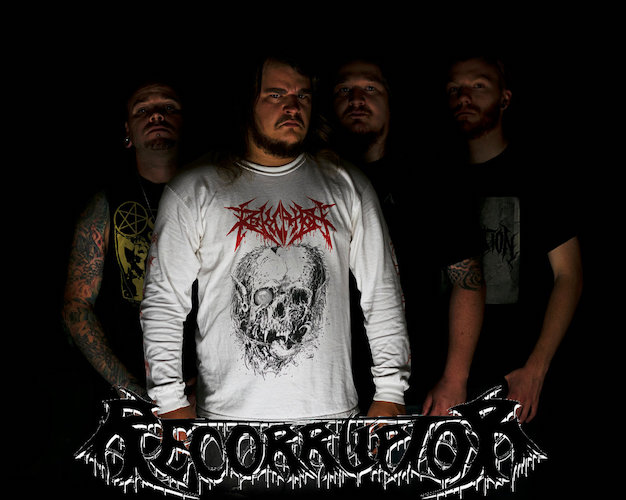 Recorruptor set the stage by revealing early on the sinister riff that haunts the song like a demonic presence from beginning to end. It sounds eerie, queasy, and corrupting, even as the band foreshadow the violence to come through bursts of drum mania and cold, cruel, domineering chords. As that ghoulish melody rises in eminence, joined by bursts of high-bpm drum munitions and horrid howls, it takes on an occult and imperialistic aspect.

And the song does indeed become violent, transforming into a sonic bloodletting that’s matched by the gruesome events portrayed in the video. The drumming goes wild, the bass thunders, the guitars become a berserker frenzy, the vocals transform into lunatic screams. It’s a musical vision of madness and mayhem, made even more frighteningly deranged by a feverish, channel-separated guitar harmony. Insectile arpeggios blend with tyrannical roars and booming grooves. The ferocity of the experience raises goosebumps. Yet that exotic and deeply sinister opening riff continues to surface, giving the music an atmospherically infernal intensity — and making it even more memorable as well.

And yes indeed, the video (directed by Stephen Richmond) is indeed gruesome. If you think the devil’s work is the work of degradation and death, it will do nothing to disabuse you of that notion. 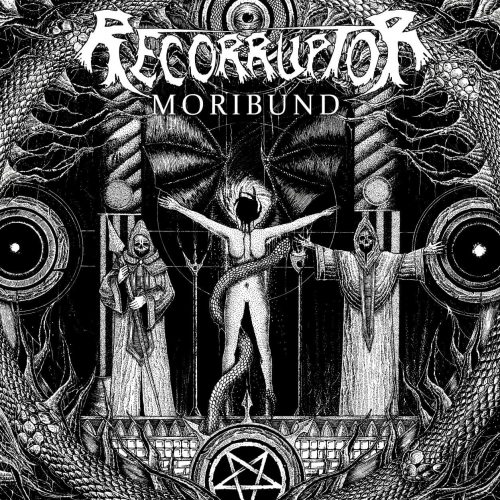 The album as a whole prompts recommendations of it to fans of the bands that the group cite as their chief influences, which include Cattle Decapitation, Cannibal Corpse, Aborted, The Black Dahlia Murder, Immolation, and Emperor. Recorruptor have delivered this statement about the record:

“The Funeral Corridor is a testament to everything that Recorruptor embodies, from sheer velocity to concrete weight in the guitar riffing, the blasting drums, and the catastrophic vocalization. The Funeral Corridor is a concept record, creating one large story dealing with acceptance in loss, the inner decline of man, and the futility of disobeying the natural law of order. This is all set in a vivid landscape of terror, displayed through mystically dark euphemism and emotional grief. As the lyrics paint the picture, the instrumentation is the foundation and matches the idea of the lyricism in a pleasantly horrifying manner.”

The Funeral Corridor was recorded and mixed at Broken Monolith Studios and mastered by Rivers of Nihil guitarist Brody Uttley. It features excellent album art by Jois Izmi Vatra. The album is available for pre-order now on CD and with apparel bundles. And as an added bonus to this premiere, we’re including streams of the two previously released singles, “Souls of Limbo” and “Tormented Egress“.