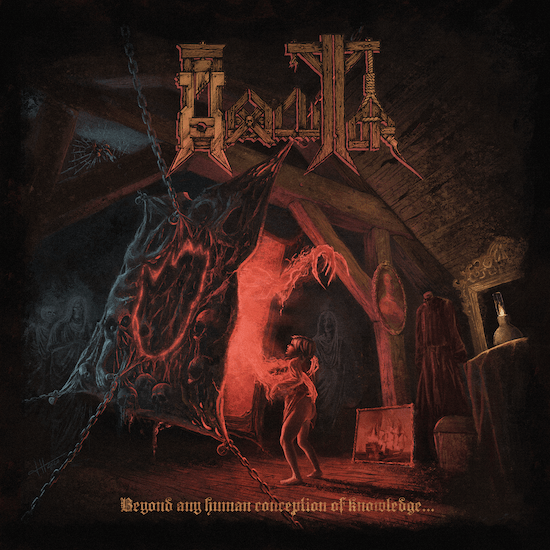 The phrase “Danse Macabre” (sometimes also called the “Dance of Death”) is a very old one, with its roots in a medieval Europe decimated by the Black Plague and endless wars. In its most common imagery, the earliest of which dates to 1424, cavorting skeletons gleefully escort kings, knights, and commoners alike to their graves, leading them in a wild waltz that mocked the dismay of the fallen. Both satirical and cruel, the imagery seemed to convey, as one author wrote, that “regardless of status, wealth, or accomplishments in life, death comes for everyone”.

As you’re about to discover, that ancient phrase makes a very fitting title for the song we’re premiering off the forthcoming second album by the French hellraisers in Hexecutor. Entitled Beyond Any Human Conception of Knowledge, it will be released on September 25th by Dying Victims Productions. 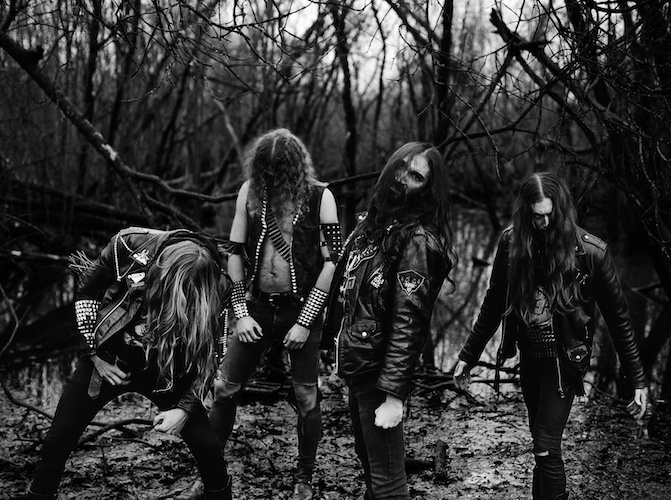 Hexecutor made an explosive first impression with their early releases, and especially through their 2016 debut album Poison, Lust and Damnation. But it is fair to say that they’ve truly upped their game on this new full-length. To borrow the entirely accurate words from PR material for the record, “swirling in their cantankerous cauldron of old Slayer, Razor, Destruction, Sepultura, and Merciless is a passion for classic hard rock and heavy metal and coated in the feeling of Bathory’s Blood Fire Death and Manowar’s Into Glory Ride“.

The press materials drop even more name-references than those, as a sign of just how expansively Hexecutor have embraced stylistic ingredients of extreme metal and rock, and brought them into their diabolical fortress of thrash and speed metal. Moreover, Hexecutor have thematically incorporated the myth and magic of their homeland of Brittany, as laid down by such authors, folklorists, and poets as Anatole Le Braz, Paul Sébillot, or François Cadic, drawing upon those traditions for inspiration and as fuel for their musical fires on each track.

The album isn’t a non-stop drag-race, but in “Danse Macabre” Hexecutor let loose their inner speed demons, uncaging a flurry of feverish, racing riffs, boiling bass lines, and galloping beats, and in keeping with the devilish energy of the song, the vocals are demonically savage and relentlessly raw. The surge is hot and fast enough to communicate the music’s brazen, exultant energy with irresistible power, but the experience becomes even more capable of blowing the top of your head off thanks to a generous panoply of guitar solos.

What makes those solos so insanely good is that they’re more multi-faceted and engrossing than the standard shred-fest, and more naturally and faithfully intertwined with the moods and melodies of the song as a whole. Yes, they’re impressively fleet-fingered, but they’re also melodically glorious (we might even say “anthemic”, but they’re a little too insanely sinister for that!). And as further icing on this infernal cake, the rhythm section get plenty of chances to go wild while the guitarists are whipping up a string-melting firestorm.

Recognizing the special nature of this album, Dying Victims is giving it a lavish release, presenting it with amazing cover art courtesy of Skelethal’s Jon Whiplash on CD, cassette tape, and variant vinyl LP formats. You can explore the options via the links below, and in addition to today’s premiere you can also check out the previously released track “Ker Ys“.