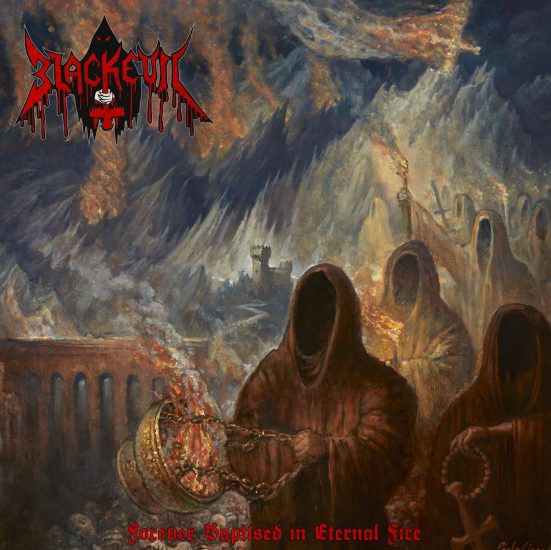 The immediately recognizable handiwork of Paolo Girardi that graces the cover of Blackevil‘s new album creates august expectations for the music all by itself. But high expectations were already raised for those of us who’ve encountered this German trio’s past works — their 2016 debut EP Hail the Cult, their 2017 first album The Ceremonial Fire, or their 2018 split with Italy’s Witchunter (Witchevil Attack!).

We are happy to report that such high expectations will not be disappointed. To the contrary, as you’ll learn for yourselves through the song we’re premiering today, Blackevil have, if anything, exceeded expectations on their second album Forever Baptised in Eternal Fire, which will be released on September 25th by Dying Victims Productions. That song is the aptly titled “Lucifer’s Supremacy“. 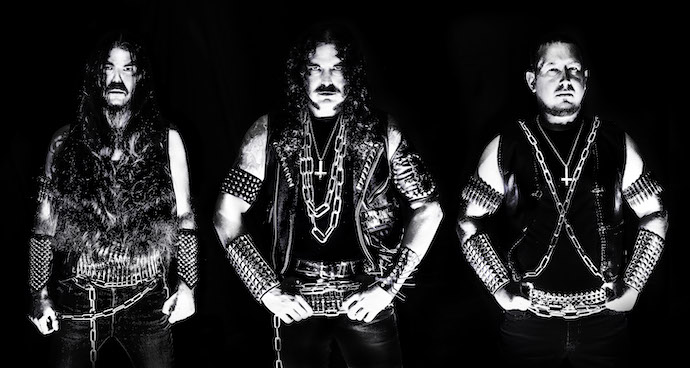 In this new album Blackevil have clearly honed their blades, blades forged in the flames of the legendary German thrash bands Sodom, Kreator, and Destruction, as well as such speed metal greats as Razor, Evil Angel, OZ, and Exciter. But the music does more than viciously slash and blaze away. Black/thrash it clearly is, but it’s more than that, because Blackevil’s tastes evidently have a broader range, and the album’s clear and cutting production vividly displays their songwriting aplomb as well as the considerable instrumental chops of every member.

Reverential choral voices, resounding as if recorded within a catacombs, greet the ears first as “Lucifer’s Supremacy” begins. It’s an opening that fits well with Paolo Girardi‘s artwork, as does what follows — a glorious fanfare of pealing guitar and explosive drum bursts. And then comes the torrential surge of razoring thrash chords, febrile bass tones, furious drum battery, and venomous snarls. The effect is electric.

The music pulsates with a poisonous, spurting riff and savagely seethes with cruel trem-picked swarms as the demonic vocals escalate into ferocious screams. Feverishly flickering leads rise and glitter with paranormal light, in tandem with soaring cascades of magisterial melody, maniacally thrusting bass notes, and hammering snare attacks. The song seems to end… but does not. The fire is quenched, seemingly by the wind you can hear, allowing reflection to the tune of a mystical acoustic melody.

Along with this song we’re also including a stream of the previously released track “Black Fire Tornado“, which is a supremely well-chosen name for the black-thrashing devil-rush of the music. Yet while the song is high-grade adrenaline fuel, Blackevil again prove their talent for creating an atmosphere of magic and menace, and of bringing into play the epic fireworks of classic heavy metal, creating an anthem of devilish glory and blood-rushing ecstasy.

Dying Victims will release Forever Baptised in Eternal Fire on black vinyl and special-edition colored vinyl, bundled with other goodies (and including download links), as well as on CD and digitally. Pre-orders are available now in advance of the September 25 street date.

One Response to “AN NCS PREMIERE: BLACKEVIL — “LUCIFER’S SUPREMACY””