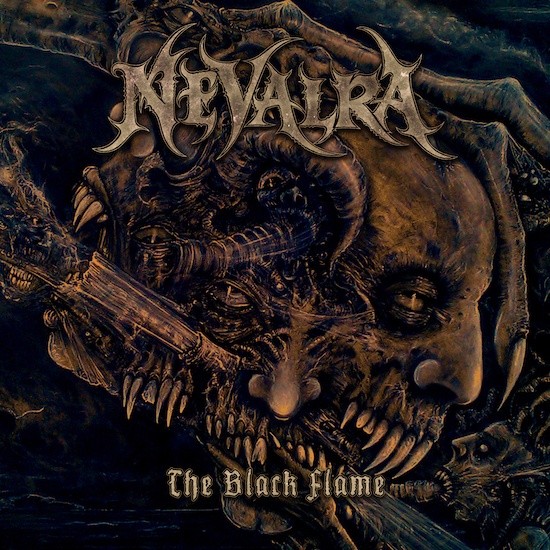 In the southern part of Nevada, northwest of Las Vegas, lies Groom Lake, a desolate and lifeless salt flat. It’s a place that few people will see with their own eyes because it’s located within the mysterious Area 51 installation of the U.S. Air Force and used there as a runway for bombers… and other less familiar aircraft. “Groom Lake” is also the name of a song by the Missouri-based blackened death metal band Nevalra that we’re presenting today through a new video.

“Groom Lake” was originally released as the closing track on Nevalra’s 2015 EP The Black Flame, which was followed in 2019 by the band’s debut album Conjure the Storm. Since the EP was first released, Nevalra have gone on to receive considerable acclaim in the metal press and to tour and perform in more than 20 countries. Now the band and their label M-Theory Audio have decided to digitally reissue The Black Flame, accompanied by an updated treatment of the original cover artwork by noted horror artist Brett Gray. 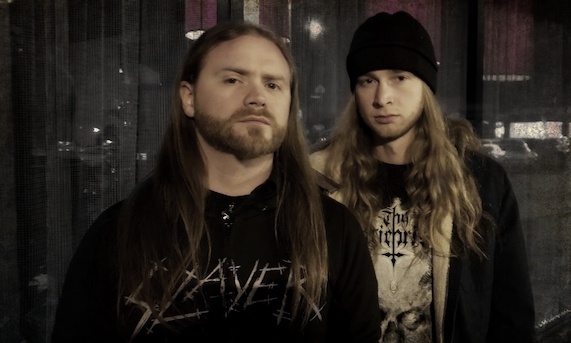 It’s no wonder that the label and the band decided to expose the EP to a wider audience at this time, because it has weathered the passing years very well, and “Groom Lake” is vivid proof of that. Vocalist/guitarist Scott Eames explains the inspiration for the song:

“Groom Lake” was influenced by the rumors and secretive nature surrounding Area 51. The subject has always piqued my interest. Are we alone? Or are we not alone? Either thought is astounding. “Groom Lake” was written in three segments, structurally building the song both musically and lyrically. It is truly one of my favorites to perform live on tour and has been mentioned a lot as a fan favorite. NEVALRA felt it was time to create some new visuals to articulate “Groom Lake” for The Black Flame reissue, and we are excited to now share the new official video with the world (worlds?)…

“Groom Lake” is a ravishing musical hybrid. On the one hand, it’s often breathtakingly intense. The vocals alone are incinerating, and acidic enough to strip paint from vast walls. The bursts of torrential bass-and-drum bludgeoning hit hard enough to rock you back on your heels. The flickering and screaming leads seem to portray desperation and terror. And the song’s guitar solo is scorching (as well as soulful).

On the other hand, the melodies are emotionally arresting in a different way, ranging from the haunting yet glorious cascades of sound that open the song to the moody and mercurial arpeggios that lace the song, repeatedly resurfacing to create moods of menace, mystery, and grief.

The video accompanying the music, which was made by Raf Ortega of Ecliptic Visions (Hecate Enthroned, Nightfall). even more unquestionably connects the music to the song’s subject matter, and heightens its creepiness.

The date set by M-Theory Audio for the reissue of The Black Flame is August 28th. — on that date it will become available on all streaming platforms, though you can check it out on Bandcamp now. For more info, check the links below. Nevalra are now at work on a follow-up to their Conjure the Storm debut album, a record that’s well worth your time if you haven’t discovered it already.