(We present Andy Synn‘s lavish review of the new album by Toronto-based Panzerfaust, which will be released by Eisenwald on August 28th.)

It’s been well-documented, several times now, just how much I love Panzerfaust’s 2019 album, War, Horrid War (part one of the still-unfolding “Suns of Perdition” saga).

Not only was it the album which signalled the band’s effective rebirth – transforming them from relative unknowns into “ones to watch” – but it also snagged them a coveted slot at the 2020 edition of Maryland Deathfest, where they were one of my most anticipated bands of the entire festival.

Sadly, as we’re all too aware, this year’s MDF was cancelled/postponed, so it looks like I’ll have to wait a little longer to experience the explosive power of the band’s live show, but, in the meantime at least, I can content myself with the knowledge that not only is Render Unto Eden (arguably) even better than its predecessor but also one of the most outstanding albums, Black Metal or otherwise, of the year. 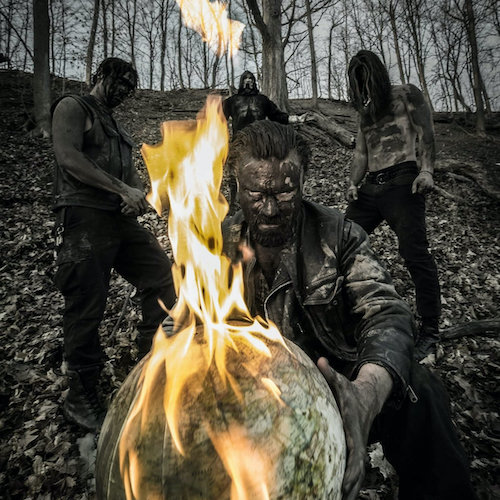 In some ways Chapter II of the “Suns of Perdition” saga picks up where Chapter I left off.

The cruel, commanding vocals are still delivered in a thrombolytic, throat-rending growl. The guitars are as utterly massive, subtly melodic, and unexpectedly multi-faceted as ever. And the interplay between bass and drums is, if anything, even more progressive and pronounced (bassist Thomas Gervais really does not get enough credit for his crucial contributions to the band’s rich and imposing sound).

But there are also a few characteristic differences, most notably the even greater emphasis that’s been placed on sinister ambience and misanthropic atmosphere this time around, meaning that several of the album’s most defining moments also happen to be amongst its quietest and/or most introspective, from the doom-laden second half of “Promethean Fire” (ably aided and abetted by the haunting vocals of Arkona’s Maria Arkhipova) to the breathtakingly bleak intro to “Pascal’s Wager” (which makes great use of a sampled speech by Richard Dawkins to establish an elegant, elegiac tone that’s equal parts hope and despair).

That doesn’t mean it’s in any way lacking in terms of sheer, almost physical, heaviness by any means – “The Faustian Pact”, for example, is absolutely loaded with titanic, titanium-clad riffs, rapid-fire fretwork, and apocalyptically intense drumming, with drummer Alexander Kartashove continuing to prove himself as one of the most impressive, and interesting drummers in Black Metal (his prodigious performance on “The Snare of the Fowler” is a particular highlight) – but the overwhelmingly oppressive nature of the album’s overarching atmosphere goes above and beyond the mere physical realm.

Make no mistake about it though, for all their more atmosphere-heavy inclinations and impressive instrumental prowess, Panzerfaust are still, unreservedly and unashamedly, a Black Metal band, all the way down to the soles of their bloodstained boots, from the audaciously epic ending to “Areopagitic” (which traces its lineage all the way back to classic Immortal), to the brutal blastery and percussive complexity underpinning the second half of “Pascal’s Wager”, whose mix of pulverising power and chilling melodic menace will surely appeal to even the most disillusioned Marduk or Mgla fans.

More than anything, however, it’s the album’s sense of totality, that the whole is greater than the sum of its parts, which leads me to the conclusion that Render Unto Eden is, fundamentally, an even better album than War, Horrid War (though the latter may always remain my favourite), to the point where I would love to see these guys start to reap some of the same sort of critical and commercial acclaim once lavished on bands like Watain or Behemoth (albeit, without all the narcissistic self-absorption and subsequent nosedive in quality).

It may have taken them a little while to get here, but Panzerfaust have finally, and truly, come into their own over the last couple of years, and if there’s any justice left in this wicked world of ours they’ll soon be spoken of in the same breath as many of Black Metal’s living (and un-living) legends.

3 Responses to “PANZERFAUST: “THE SUNS OF PERDITION – CHAPTER II: RENDER UNTO EDEN””