The Chilean black/death band Indoctrinate are making their recording debut in September, but are not newcomers to the realms of extreme musical mayhem. Indoctrinate is instead a new slaughtering vehicle for two former members of the now-defunct Sadistik Goathammer (they are also bandmates in Henosis), whose mission was to carry forward the lineage of such bestial rampagers as Sarcofago, Mystifier, Abhorer, Parabellum, Blasphemy, and Conqueror.

Indoctrinate haven’t abandoned those roots, but as you’ll discover through the song we’re premiering today, they’ve leavened their attacks of primitive barbarism with other ingredients that give the music an even more primal and carnal appeal as well as a frightening paranormal aura.

As a harbinger of those sensations, the name of Indoctrinate‘s debut album, which will be released by Unholy Prophecies, is Antilogos: Arcane Transmutation in the Temple of Flesh. And the song we present today is “Forbidden Rites of Fertility“. 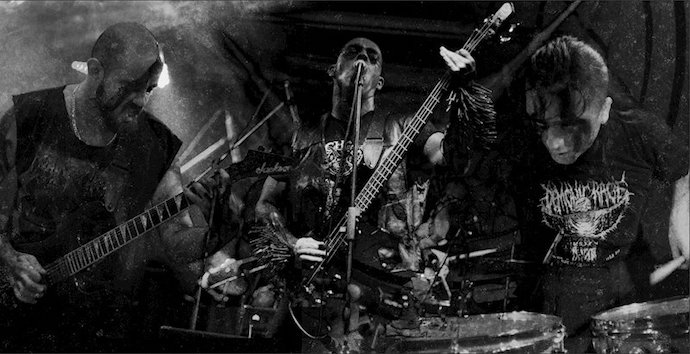 The grotesque harmony generated by the song’s turbid, grinding riffage leaves no doubt that Indoctrinate still have a taste for bestial barbarity, while the flaring bursts of crazed, skittering, and swirling fretwork channel a kind of sulfurous lust. Those roiling masses of diseased and demented fretwork are dense and devastating, but the kit-work gives the music rhythmic hooks as the drummer switches from hammering blastbeats to kick-drum fusillades, thunderous detonations, and somersaulting fills.

And there are some other big attention-grabbers yet to come. Near the song’s mid-point there’s an old-school breakdown in which the band mix in doses of jackhammering chords and eerie serpentine melody (backed by attention-grabbing drum acrobatics), along with a searing and soaring guitar solo that’s hellishly ecstatic. Meanwhile, the vocals are pure demonic terrorism, a cavalcade of rabid howls and wild screams that matches the music’s aura of demonic savagery.

Along with today’s song premiere, we’re also sharing a stream the previously released track “Savagery“, which is true to its name but also insinuates strands of hopeless melody and imperious marches into its neck-wrecking, bowel-churning, flesh-rending onslaught of riot and ruin.

Unholy Prophecies has set September 25th as the release date for Antilogos: Arcane Transmutation in the Temple of Flesh. Keep an eye on the locations linked below for announcements about how to acquire the album.

One Response to “AN NCS PREMIERE: INDOCTRINATE — “FORBIDDEN RITES OF FERTILITY””