So, as the scriptures command, I’ve elected to use today’s column to focus on a handful of bands, each one a disciple of death in one form or another, who choose to worship… at the altar of tech. 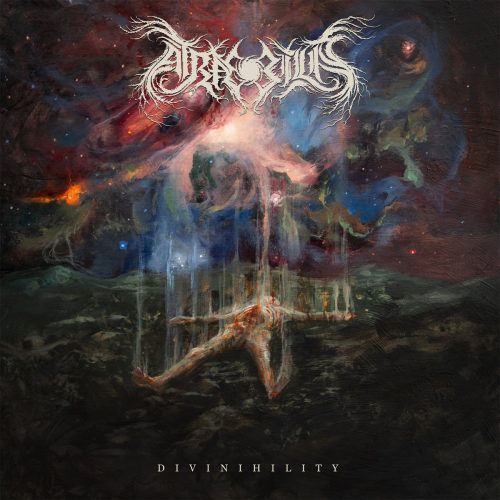 Canada, as I’m sure you’re aware, is practically the “Holy Land” when it comes to Tech Death. So it should come as no surprise when I say that Canadian Brutal/Technical Death Metal crew Atræ Bilis can shred, riff, and blast with the very best of them.

Now, strictly speaking, Divinihility is a lot closer to an EP than a full album, clocking in at just (and I do mean just) over 22 minutes in total, but quite frankly that’s more than enough time for the band to bombard and brutalise your senses into submission with their OTT auditory assault.

The record’s first “proper” track, “Sulphur Curtain”, hits you right in the face immediately with its combination of beefy, Blood Red Throne inspired riffs, chunky, Suffocation-style slam parts, and unexpectedly Ulcerate-esque moments of eerie dissonance, managing to throw in a kill-room sink’s worth of influences without sounding like a mangled clone of any of them (and, considering the velocity at which these various parts are smashed together, that’s an achievement all by itself).

It’s followed in quick succession by “Phantom Veins Trumpet” and “Ectopian”, both of which (whether it’s an unpopular suggestion or not) are oddly reminiscent of Gojira’s earlier, heavier years (albeit with the Morbid Angel influence turned up to maximum). The former in particular conceals a surprising amount of dark melody beneath its more dominant, dissonant, aesthetic, while the latter packs in an intense mixture of fat/phat grooves, twitchy, teched-out riffs, and surprisingly proggy atmospherics in a manner which also recalls prime-era Decapitated.

The blast-driven percussive power and menacing, almost blackened, melodic touches of “Upon the Shoulders of Havayoth” land somewhere between Hate Eternal (especially in the song’s first half) and Hate (particularly in its later stages), but with just enough twists involved to sidestep any accusations of plagiarism, after which the EP/album concludes with the bombastic brutality and technical angularity of “A Ceremony of Sectioning”.

I’ve dropped a lot of names in this review (in case you hadn’t noticed), but that’s only because Atræ Bilis so clearly draw a little bit of influence and inspiration from each of the bands mentioned (and probably several more besides) across the course of this record. In lesser hands, of course, this would have made Divinihility a cantankerous camel (i.e., a horse designed by committee) of a record, but in the hands of this Canadian quartet they’re amalgamated into a murderous metallic mongrel which has taken on all the best traits of its forebears (they call it “hybrid vigour”) and none of their weaknesses.

Let’s hope this is one monster which does manage to breed, because this is a very promising debut indeed, and I look forward to hearing a lot more from these guys in the near future. 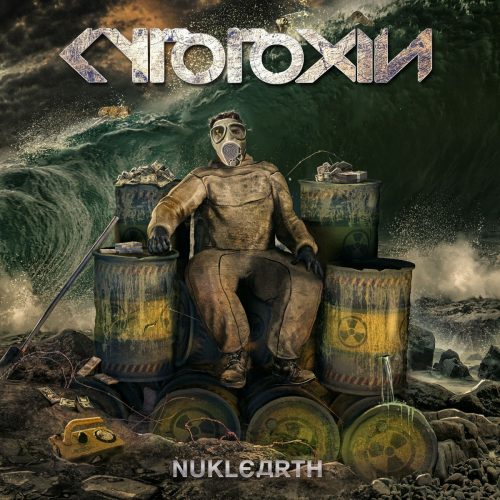 If you thought the previous entry was brutal then, well… you ain’t seen/heard nothing yet.

German masters of disaster Cytotoxin – set to unleash this, their fourth platter of savage sonic filth, onto the world tomorrow – are celebrating a decade of damage this year, and honestly couldn’t have picked a better way to do so, as Nuklearth is easily the equal of anything they’ve done before… and might even be their best record yet (although I know that’s a controversial suggestion).

For those unfamiliar with the band you’ll be interested (or horrified) to know that their sound shares a lot of similar sonic markers with the likes of Beneath the Massacre, Benighted, and Defeated Sanity, in that it incorporates bits and pieces of Brutal Death Metal, Tech, ‘core, and Grind into a carefully constructed metallic murder machine that doesn’t pull any punches in its quest to hammer smash as many different faces in as short a time as possible.

Wisely, however, for an album that’s approximately 70% blastbeats, 30% breakdowns, and 100% skin-shredding technicality, Nuklearth doesn’t just settle for hitting you the same way every single time. After all, that way madness (and numbness) lies.

Instead, Cytotoxin have made sure to pack pretty much every track with as many viral hooks as possible, from the chunky chug-patterns and infectious tremolo injections which characterise “Atomb” and “Lupus Aurora”, respectively, to the borderline blackened brutality of “Uran Breath” and the barrage of breakdowns, blastbeats, and bass-bombs which makes up “Dominus” (and that’s just the first four tracks).

Of course those with a lower tolerance for unrelenting, undiluted heaviness may find the whole uncompromising affair a little more difficult to get into, but I think even they’d probably agree that songs like “Drown in Havoc” and the monstrously groovy, utterly gargantuan title-track, are as viscerally, virulently catchy as they are absolutely crushing.

But for those of you worried that the band may have “sold out” by including more hooks and incorporating a little bit more melody (even if it’s melody with some real bite to it) you’ll be reassured to know that the “Dying Fetus on steroids” assault of “Soul Harvester” and the abject chaos and calamity of the worryingly relevant “Quarantine Fortress” deliver just as much pound-for-pound punishment and technical terrorism as anything the group have previously produced.

Don’t get me wrong, Nuklearth does have its flaws, namely the way that ambient interlude “Dead Zone Anthem” and pointless instrumental outro “Mors Temporis” absolutely kneecap the album’s momentum right at the final hurdle, but for about 90-95% of it’s run-time (and I haven’t even mentioned “Coast of Lies”, whose many highlights include some extremely impressive, tech-tastic bass work) this record delivers some of the year’s most effective and unparalleled brutality, and looks and sounds damn good doing it. 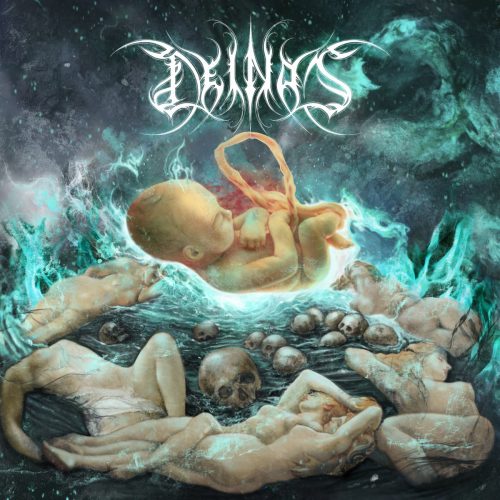 I don’t really know all that much about this band, to be honest, other than that it’s primarily a solo endeavour and errs more towards the Deathcore side of the spectrum than the other groups featured here.

But, quite frankly, I don’t need to know much more than that. And neither do you. All you need to know is that if you’re a fan of the shred-blast-breakdown style of bands like All Shall Perish and Through the Eyes of the Dead then you’ll doubtless find a lot to love here too.

Whether it’s the twisty, techy riffs, chunky, choppy rhythms, and punishing (if overly-processed) drums of opener “Akatsuki” or the frantic fretwork and high-velocity attack of “Amber 3”, there’s not a lot here that you won’t have heard before (the more melodic moments of both tracks also owe a fair bit to early After the Burial too, if I’m not mistaken), but when it’s all delivered with such vim and vigour it’s much harder to complain about this perceived lack of originality than you might think.

It’s a lot easier, instead, to simply focus on the impressive intensity of songs like “Demon” — all thunderous chugs, bone-rattling grooves, and shameless melodic hooks – and the shreddy savagery of “Nefarious” (probably the album’s best track, as well as the closest thing to “pure” Tech Death), as it’s numbers like these which remind you that sometimes it’s ok to just turn off your higher brain functions and enjoy the ride.

So what if the album’s mix of melodic, technical, groove, and ‘core elements adheres to a relatively familiar formula? And who cares if the “gurgling growl to snarling shriek” vocal style is a little bit played out these days? The bottom line is that Right Ascension is still an absolute blast to listen to, even if it’s more of a sudden sugar-rush of a record than a properly nutritious meal.

Sure, it has a couple of other, more obvious flaws too – “Diatomaceous” doesn’t do enough with its guest clean vocals to properly justify their inclusion, making it feel more like a box-ticking exercise than a key part of the song, while “Nichibotsu” is kind of a weak closer, especially when its predecessor, “Silver”, is just so much better all ’round – but that shouldn’t prevent you from enjoying this album for what it is… and what it is is a solid half hour or so of Tech-Death-Core thrills and spills (with maybe a few too many spills for its own good) that’s fun while it lasts, and never asks much more from you than your willingness to take it as it is, on its own terms. 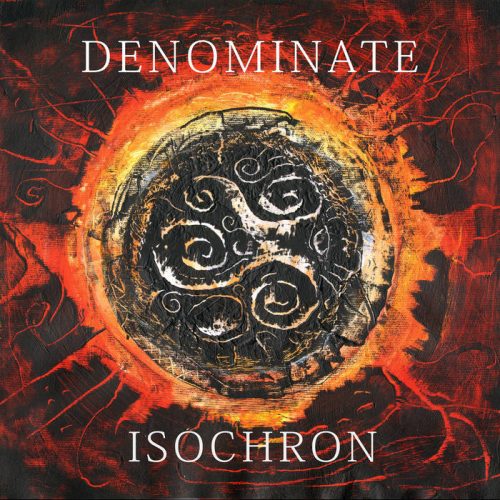 The second album from Finnish five-piece Denominate finds the band planting themselves firmly in the proggier part of Tech Death territory, situated somewhere between the agile, dynamic delivery of Obscura and the more melodic/proggy approach of early Allegaeon, but possessing just enough twists and tricks to allow the band to stand on their own two ten feet.

I’ll grant you, it’s still not the most original sounding album – bits and pieces of it also put me in mind, at different points, of Anata, Gorod, and even Iron Thrones (RIP) – but the band are clearly a talented bunch, and not just in the technical sense, as it takes a fair bit of songwriting know-how to take so many familiar elements and still manage to craft something fairly compelling out of them.

At only seven songs long, the shortest of which is only a little under seven minutes in length itself, Isochron clearly isn’t interested in performing a straightforward smash ‘n’ grab.

Take opener “The Chain”, for example. It’s a surprisingly slow and stately introduction to the album, preferring to entwine the listener in layers of intricate riffs, undulating bass lines, and precise percussive patterns, rather than simply blast them in the face with a premature ejaculation of notes, and is all the better for it, as this approach really allows the instrumentation to breathe and gives the audience a chance to properly appreciate all the thought and care which has gone into the song’s arrangement.

Not every track is like this though. “Departure”, for example, may start off in a more Akerfeldt-ian style (and return to this a little later on when it drops back into calm acoustic picking for a moment), but it’s also driven by some strikingly swift blastbeats and kick patterns, while “Abandoned” ups the ante even further by adding some tense, almost thrashy, riffs and rhythms to its scattergun snare beats and rapid-fire fretwork.

Even here though there’s still a proggy, melodic core to the band’s songwriting, one whose central thread continues to tie everything together, and this is even more obvious during the Opeth-meets-Obscura stomp of “Succession”, where moody melody meets technical precision in a devious dance of persuasively proggy Death Metal.

It’s in the album’s back-half/final third where the real magic happens, however, as it’s here – from the sublime, atmospheric slow-burn of “Desolation”, to the explosive energy and extravagant melody of the title track, via tumultuous, ten-minute Prog-Death powerhouse “The Chronicler” – where the band finally start to reveal the true extent of their ambitions and, in doing so, begin to step out of the shadows of their various idols and influences.

Denominate might not be quite ready to step fully into the spotlight just yet, but there’s clearly a lot of potential here, and hopefully future releases will find the band able to realise and exploit their obvious talents and abilities with even better results!

4 Responses to “AT THE ALTAR OF TECH: ATRÆ BILIS / CYTOTOXIN / DEINÒS / DENOMINATE”