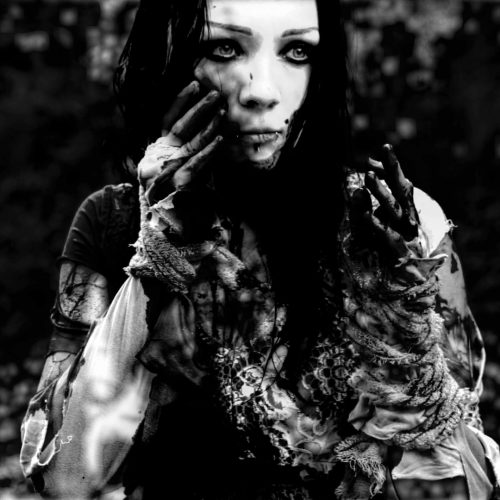 (Andy Synn prepared the following introduction for our premiere of a video by the multinational band Lebenssucht for a song from their 2020 debut album.)

Is there any greater joy than discovering a band early on in their career and then following them as they grow, develop, and evolve into something truly special?

I suppose some people might say parenthood but… those people are wrong.

Case in point, we first came across the bleak malevolence of multinational Black Metal coven Lebenssucht way back in 2016, and even ended up hosting a premiere for their first video, “Beloved Depression”, not long after.

In April this year the band released their debut album, -273,15°C, which built upon the potential demonstrated on their EP by going even deeper, darker, and bleaker than ever, and today we’re once again pleased to host another video premiere for the group, this time for the record’s sinister second track, “A Hole In My Heart”.

At over ten-and-a-half minutes in length, “A Hole In My Heart” may not seem like an obvious choice for a single/video, but considering it’s one of the best tracks on the album, blending the raw emotion and blood-curdling venom of Silencer and early Shining with the denser, heavier attack of bands like Enthroned and Darkened Nocturn Slaughtercult, it’s undeniably a perfect example of what dark delights the band have to offer.

Shot entirely in stark black and white, which gives the whole thing a hauntingly dreamlike, at times bordering on nightmarish, aesthetic, the primary focus of the video is a series of abstract, almost ghostly, images of Lebenssucht frontwoman S. Caedes wandering, dead-eyed and bloodstained, along an empty railroad track, intercutting, as the song progresses, with a number of intimate, home-movie style shots of another young woman, laughing, smiling, and full of life in a way which seems strangely at odds with the desolate, depressive vibe of the music and accompanying footage.

Over time, however, the thematic resonance between these different facets of the video becomes more and more apparent, even as more and more questions arise.

Why, at certain points, is Caedes seen clutching a fluttering newspaper article featuring an image of that same girl? And why, towards the end of the video, do we see more and more shots of her, lying bloodied and broken, by the side of the tracks?

The answer, as is revealed right at the very end, is that this video is dedicated to the memory of Jenny Zimmermann, a young woman who was struck and killed by a train in 1997, at the all-too-young age of 16, and this revelation really does add a whole new dimension to the song’s wounded, grief-stricken vibe.

If you like what you see/hear here, you can listen to the whole album, and pick up a digital or physical copy of the record for your collection, at the band’s Bandcamp page:

3 Responses to “AN NCS VIDEO PREMIERE: LEBENSSUCHT – “A HOLE IN MY HEART””