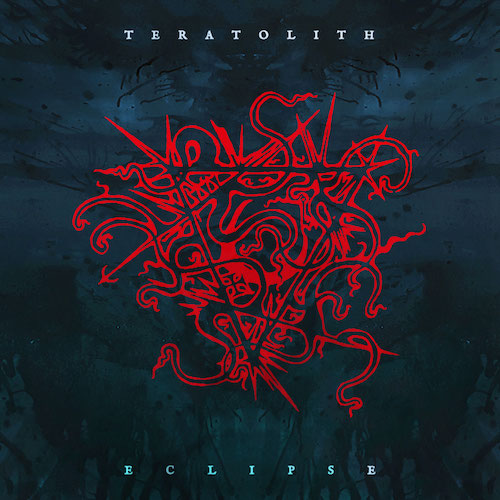 Much is unknown about Teratolith. Its members are anonymous, their location a mystery. But what has already become apparent is that they are powerful necromancers, adepts at the creation of musical horror-scapes that engulf and submerge listeners within their frightening, avant-garde hybrid of black metal, death metal, and ambient mysteries. Last year and this year the band digitally released their first two EPs, Eclipse I and Eclipse II. And on September 25th Brucia Records will be releasing them together on an album-length CD and tape edition, also entitled Eclipse.

While much remains mysterious about the band — and intentionally so, because (as the label explains) their objective is to disconnect their creations “from virtually any other aspect of the mundane world” — Brucia has disclosed that the overarching purpose of the project is to “explore the obscure realities behind and beyond the physical dimension”, to create “unique and excruciating meditations on the occult as seen through the eyes of Death and Chaos itself.” 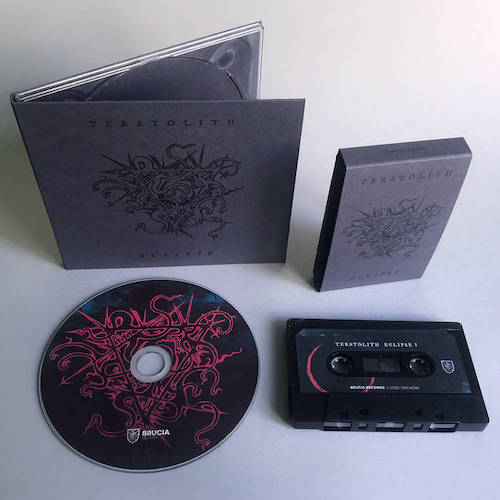 The album-length release presents the two EPs in their original sequence. The song titles are all numbered, though on five of them the numbers are accompanied by other words. The album opener, for example, is “One. Death“, and that’s the track we’re presenting today.

At the beginning, eerie gleaming tones and abrasive disruptions unfold into dense, yowling chords and senses-scarring howls. The pacing is slow though the drumming pulses and throbs in bursts, and the music moves across those beats like a giant python of morbid menace. The suffusing vibrations of the serpentine melody slowly rise and fall in a way that becomes entrancing, despite how deeply sinister and virulent it sounds, and despite how shattering the vocalist’s screams become, as if captured within those giant coils and having the life remorselessly squeezed from him. Eerie bell-like tones ring out, and at the end a swirling wash of deep ambient tones, gasping whispers, and spectral wails complete the apparent task of the song — to put a deep chill in your bones and a nightmare into your mind.

The album’s second track, “Two“, was previously revealed by Brucia Records, and you can listen to it below as well. It has an immense heaving intensity, unmistakably dark, cold, and cruel. Those waves of deep, all-enveloping sound are again segmented by bursts of drum mania, yet those spurts of intensity evaporate as the song flows into an eerie, void-like path accented by strange ringing arpeggios and what might be grim, demonic snarls. As the drums return, blasting away, the riffing suffocates the senses again with undiluted poison, creating an atmosphere of other-dimensional malignancy. Poltergeist howls and weird, wailing tendrils of melody infiltrate the music like a fatal fever. By the end the song generates a horrid aura of blood-freezing, yet still awe-inspiring, grandeur.

Finally, the label has also made “Seven” available for streaming (also accessible below). This was originally the penultimate track of the second EP. By then Teratolith had not retreated from their arcane investigations but instead seem to have only plunged more deeply into the void. The despairing wails of mutilated souls seem to drift through a harsh and heartless realm of Stygian blackness, eventually subsumed in a torrent of blasting percussion, ringing, raking chords, and gasping incantations. The music ripples like the veil of yet another realm, even more un-real than what has come before.

Eclipse is available for pre-order now from Brucia Records, digitally and on digipack CD and a special limited edition of cassette tapes. It is recommended for fans of Blut Aus Nord, Skàphe, and Aosoth.