(Here’s DGR’s review of the new album by the Swedish band Night Crowned, which is out now via Noble Demon Records.)

Night Crowned‘s debut album Impius Viam came out in the tail end of February and it has felt like a musical mental roadblock on this end ever since. We were lucky in being able to cover the band’s premieres at this site and even got their drummer to sit down and talk with us for a bit, yet when the full album came out we never fully sat down to dedicate words to it. Yet it’s been in constant rotation here, an ugly sort of beast clawing at the back of the skull.

The group’s hybridizing of a collective of extreme metal genres — with a heavy ratio of melodic black metal dominating the recipe — seems to have spread like an infection, and in between the spinning of newer releases this year, there’s always that haunting voice in the back of the head with its incessant whisper “what if you gave that Night Crowned disc another listen?” 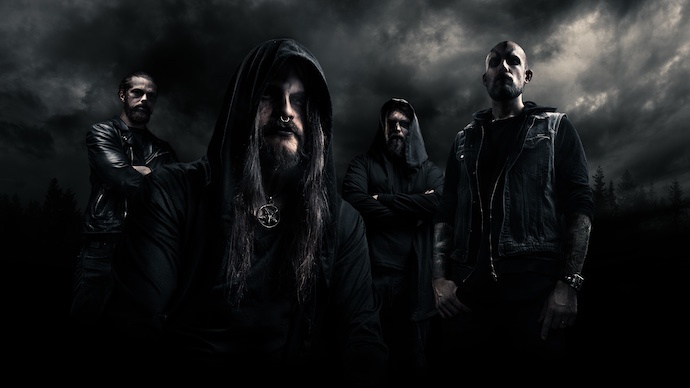 Night Crowned is a project that is early in its career, uniting musicians from groups like Cipher System, The Unguided, Disrated, and even the current Dark Funeral, with only a late-2018 EP (Humanity Will Echo Out) and this full-length debut to their name. Impius Viam carries over all three songs from the Humanity Will Echo Out EP and combines them with eight others and a thirty-second intro for close to an hour’s worth of infernal metal. Blindingly fast at times, bitingly vicious in its black metal trappings whenever they pull from that genre’s musical maelstrom, and gloriously catchy in its guitar melodies, Impius Viam has an easy time worming its way into your skull… even if took over seven months for this listener to finally get his shit together and write a dedicated review.

Sometimes it’s fun to pinpoint the exact moment when an album grabs you, identifying that one segment where a release worked its magic and placed a sequence together just right so that you can’t seem to forget it. Impius Viam has one very specific moment that defines the disc as a whole, which is hilarious given that it’s a segment where the band transition from a heavy groove into an infectious-as-hell guitar solo, into a searingly fast bombing run of sound to close things out. It comes in the middle third of Impius Viam‘s third song, “Nocturnal Pulse”, which if you have some familiarity with the band you will note is one of the returning songs from their Humanity Will Echo Out EP, with “the” removed from the title.

Impius Viam‘s first track is its title song and intro, which plays out to be about thirty seconds or so of ominous ambience before the band launch into the scorching blast of “Reborn”. “Reborn” spells out a lot of what Night Crowned are as a band. You can notice quite a few melodically minded genres crashing headlong into one another at the nexus of that song, and because they’re played at such a blisteringly fast speed, you wind up with the sort of shrieking hurricane that is a lot of Night Crowned‘s music. The difference is that in between the blackened atmospherics, the ominous choirs and keyboard lines, and the sort of throat-scarring highs that are vocalist Ken Romlin‘s modus operandi on the album, Night Crowned have an ear for a massive guitar hook — which brings us back to the middle third of “Nocturnal Pulse” and how it grabs hold of you.

“Nocturnal Pulse” divides up fairly neatly into three segments: Its opening bit picks up right where “Reborn” left off, the battle within that song continuing in ceaseless destruction up until about a third of the way into “Nocturnal Pulse”, right up to a fairly massive groove as the song shifts from the non-stop drum attack for the briefest of moments. The effectiveness of the quick fade into a massive guitar lead cannot be understated. It is one of the “oh shit” moments within Impius Viam where the band demonstrate their mastery of a huge guitar lead that can easily travel along with their apocalyptic batterings. The way the song shifts moods at the drop of a hat comes into play here, when it moves from the way it had blended with the preceding song into that massive guitar solo/lead before settling back into another round of high-speed hammering and finally fading out on some quiet instrumentation and piano. All of this makes it one of the more dynamic songs on Impius Viam.

Night Crowned settle into a groove (granted, an extremely fast one) very early on in the album, and most songs on the disc don’t shift as dramatically as “Nocturnal Pulse” does. Most of them are either melodically minded songs that accelerate face-first into a furnace, or a small group of slower ones that are built around gigantic chugging grooves. In fact, one of the other more dynamic tracks on Impius Viam, and a “slower” one for a brief period, is the immediate follower, “Ira”, whose opening moments are built around a gigantic chant, thundering guitar, and some haunting clean singing in between the quicker-moving verses. It becomes clear early on that Night Crowned really, really enjoy writing movements that consist of everything running at about a million miles an hour, and it falls on the listener to grab hold and hope for the best.

If you’ve ever crossed paths with any old-timey cartoons involving a coal-fueled engine of any sort, there’s often a gag where whoever is shoveling the coal has to go faster and faster and faster and faster in order to keep whatever vehicle they’re on moving at high speed. Night Crowned‘s approach to songwriting on Impius Viam can often feel like that gag in the way they ceaselessly pour it on — much in the same way as …And Oceans did for much of Cosmic World Mother. They find what works and then really lean into it. With fifty-five minutes of music and twelve tracks available to them, you certainly couldn’t accuse Night Crowned of holding anything back. Songs pile over one another in a high-speed torrent, so that even slower segments of songs like the aforementioned “Ira” or “Black Bone Cross” — which comes near the center of this release — can seem like the briefest moments of respite.

As Night Crowned continue their campaign to raze everything to the ground, the songs start getting a little longer and more sweeping in their grand aspirations. There are a small handful of songs here that near the five-and-a-half to six-minute mark. The other two songs from the aforementioned Humanity Will Echo Out release make their appearance here, planted directly in the final stretch of the album with one new song between them (the snarling monster of “Beneath No One”) and helping to close things out with Impius Viam‘s final weapon launch, “Ego Sum Bestia”.

As an album closer “Ego Sum Bestia” also does a good job condensing much of Impius Viam down into a dense block of music. It seems like Night Crowned launch every weapon in their music arsenal directly in the intro, going with a favored heavy chug and some truly bombastic backing key-work, which threads its way through the entire structure of the song. Every vocal approach available to them is also used during “Ego Sum Bestia”, and drummer Janne Jaloma makes damn sure to get in one final battering during that song before it extinguishes itself.

The mystical alchemy Night Crowned have performed here in combining a multitude of different genre styles results in a ferocious beast that is a lot to take on. They have swept through the black metal realms and grabbed a sizeable handful of influences from them, bringing a heap of theatrical symphonics along for the ride. They drag some melodeath influence through the mud, much in the same way they drag their vocalist during the group’s Ira music video, and throw that into the mix. They even embrace the sort of piston-fired accuracy of modern death metal at times.

Clocking in at pretty close to an hour. Impius Viam is a very dense disc that is determined to feed you into the furnace. It has plenty of time to do that, and it doesn’t let up too often. The constant hellfire quickly establishes itself as the “normal” for this album, but the ever-present nature of it, combined with some unfairly catchy guitar work and dramatic background pyrotechnics, gives Impius Viam a tremendous gift of being able to really claw its way into your skull if you allow it to find at least one hand-hold.