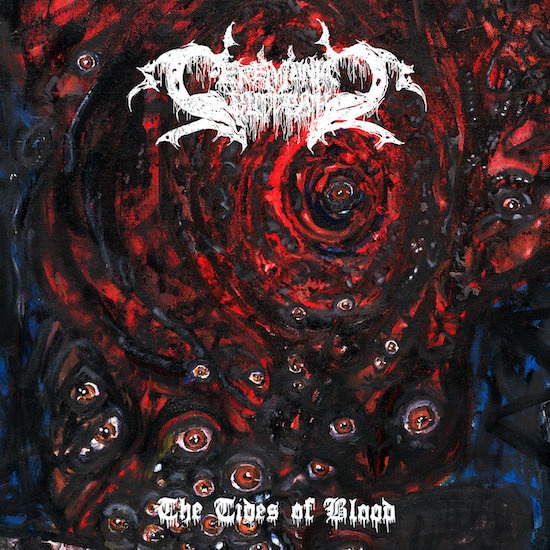 Gluttons of the most malignant and mutilating strains of death metal, open your maws wide and prepare to become engorged in your feeding. Everyone else, get ready to cower in the corner. Because on October 23rd Sentient Ruin Laboratories will release the debut album of Vancouver’s Ceremonial Bloodbath, aptly named The Tides of Blood.

The album is startling in the degree to which it plumbs the toxic depths of death metal darkness and dementia, and in its ability to discharge sonic sickness and chaos with such fiendishly ingenious calculation and such cleverly sadistic flourishes. That a new band have been able to achieve such heights of well-constructed slaughtering and drag the listener into such abysmal descents is not surprising when you learn that their line-up consists of members of such established bands as Scum Division Cult, Nightfucker, Encoffinate, Radioactive Vomit, Grave Infestation, Mass Grave, Temple of Abandonment, and Deathwinds.

As they say in the trade, the music’s not for the faint of heart. But for connoisseurs of top-shelf bestiality and supernatural dread, it’s a gem. And the album track we’re presenting today, “Primitive“, is proof positive of that. 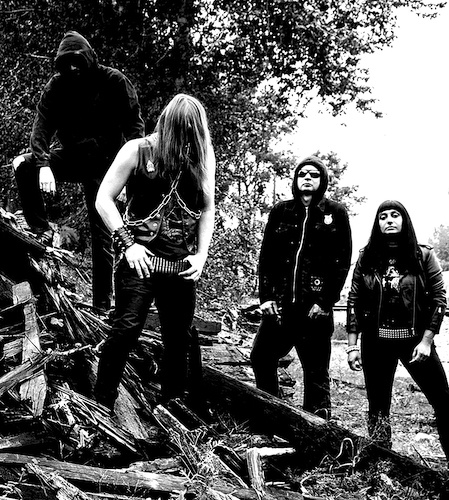 As well-named as the album’s title, “Primitive” is an experience that’s both grotesque and galvanizing, both noxious and unnerving, both wretched and ruinous. The malignant and mutilating assault begins immediately in the turmoil of ugly, cavernous riffs that writhe and pound, coupled with ghastly howls and drums that pummel and go off like depth-charges. After that opening dose of cruel barbarism, the thundering pace abates and the guitars generate an atmosphere that’s at once dismal, diseased, and supernatural, casting their miasma over massive low-end excavations and booming drum strikes.

When the tornado of corrosive riffing and brutalizing rhythms resumes, the vocalist bays like a demon wolf, and then the band cap this gruesome experience with an eruption of pure mayhem, a squall of feral, freaked-out fretwork and mauling chords, intermixed with further doses of pile-driving brutality and with the interplay of twisted guitars engaged in a call-and-response of madness.

The Tides of Blood was recorded and mixed by Jesse Gander at Raincity Recorders and was mastered by Ianzel at Necrosound Studio. The horrifying artwork (those eyes!) was created by Timothy Grieco. As mentioned, the album is coming out on October 23rd via Sentient Ruin Laboratories — and you can pre-order now:

One Response to “AN NCS PREMIERE: CEREMONIAL BLOODBATH — “PRIMITIVE””