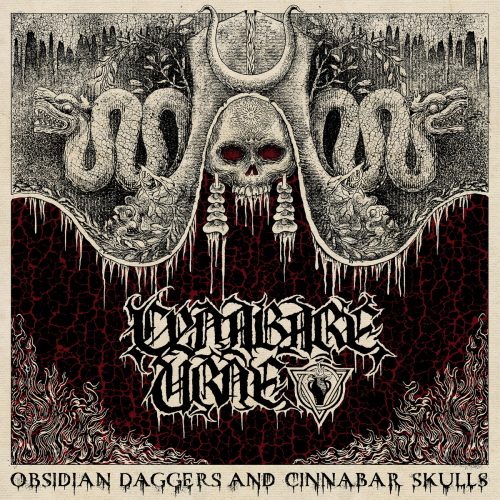 Following the release of two well-received EPs, Fire the Torches (2016) and In the Cremation Ground (2018), the monstrous Finnish death metal band Cynabare Urne are at last ready for the release of a debut album, one that harnesses the extensive experience and gruesome talents of the three performers. Entitled Obsidian Daggers and Cinnabar Skulls, it will be released by Helter Skelter Productions on October 30th, and as you can see, we’re about to bring you the premiere of a genuinely evil piece of music named “Misotheist“.

Cynabare Urne‘s ghoulish songwriting and horrifying tonal proclivities don’t lend themselves to any neat and succinct comparisons with better-known bands — witness the references made in the PR materials to a range of stylistic influences that “span Sadistic Intent to Necros Christos, classic Grave to recent Dead Congregation, early Vader to later Repugnant, and plenty of other points in between.” All those compass points are one way of trying to capture the appealing ways in which the band create multi-faceted and dynamic music, albeit without ever surrendering their adherence to dreadful power and preternatural ghastliness. 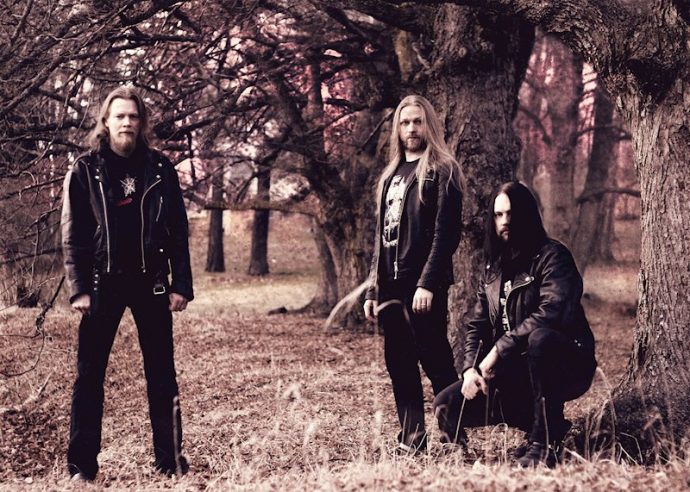 In “Misotheist“, for example, the band create a lumbering monster of sound, propelled by a methodical snare crack and deep, massive chord undulations that have an implacably ugly and malevolent tone. Augmenting the air of merciless menace and leviathan-like heaviness (which is due in part to Sameli Köykkä‘s gut-churning bass tones), the band bring in guitar leads that pulsate and spasm, as well as extravagant guttural proclamations by guitarist Jani Koskela that are as jagged as a rusted cleaver but frighteningly intelligible.

The frenzy in the music increases as drummer Ville Salonen hammers with a will and the riffing buzzes like humongous hornets mounting a venomous attack. And to further enhance the blood-congealing diversity of the song, a weird and wailing solo rises and swirls above the earthshaking tones of a death march. Misery and gloom inhabit the music for a time, but the band resume their gruesome, hammering assault, creating an atmosphere of rampant malignancy and festering disease.

We’re also including streams of two previously released album tracks, “Erida Evoken” and “Last of the Icons Alive“. The first of those, which opens the album, tells the tale of an ancient Achaean line driven mad by divine rage, drenched in the blood of warfare and doomed to die. Dismal and oppressive at first, it spurts into riotous motion. The doomed aspect of the opening reappears through backing keyboard elements and dirge-like chords, but the rapid-fire riffing, the feverish leads, the obliterating drumwork, and the utter savagery of the growls also create an atmosphere of madness and carnage.

“Last of the Icons Alive“, which immediately precedes “Misotheist” near the end of the album, has a crazed kind of liveliness to it, thanks to bounding and blasting beats and a blend of macabre riffs that dance, rampage, and blare in savage ecstasy. But the band also introduce a doleful and haunting keyboard melody over slow, groaning chords, accompanied by somber singing (yes, singing!), which together create a marked but alluring contrast to the song’s general air of electrifying delirium.

And rest assured, if you enjoy these three songs (and it’s hard for us to understand why you wouldn’t), rest assured that you’ll be delighted with the rest of the record, because it is fiendishly excellent from start to finish, a terrifically twisted combination of visceral strength, rabid energy, and unnerving atmosphere.