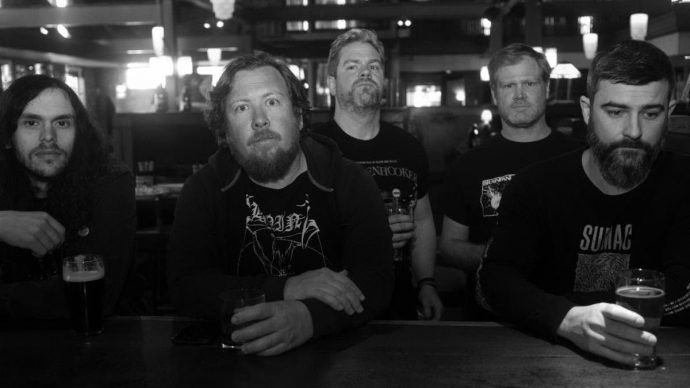 (This is DGR’s review of the latest EP by Pig Destroyer, which is out now on Relapse Records.)

Honestly, before it was made clear what Pig Destroyer‘s latest EP The Octagonal Stairway was meant to be, there was the briefest of double-takes, as I could’ve sworn there was already an “Octagonal Stairway” single released way back in 2013. Eventual digging would prove that memory true, and it didn’t take much more to clarify what this EP was.

Pig Destroyer have made a name for themselves catching people off guard with some of their EP work, usually with grander aspirations than just a rocket-fueled grind assault. Their latest full-length Head Cage did the same thing but with giant mosh riffs and huge grooves instead of artistic exploration into other genres. That being the case, even with a name like Pig Destroyer it’s still fun to see what the band are going to hurl at you through your speakers.

In this case the EP is a newly approached version of its title song, a collection of two of their singles that came out in 2019 – one via Decibel flexi disc and another an Adult Swim singles release, much like the title track here – and then three electronic experiments that either resolve into sound or are otherwise meant to slowly crawl under the skin and unnerve you. If it feels to you as a listener like a release with multiple personalities fighting for some sense of identity, you wouldn’t be the only one in thinking so, but it is very convenient to finally have these songs under one roof if you weren’t able to find them otherwise. 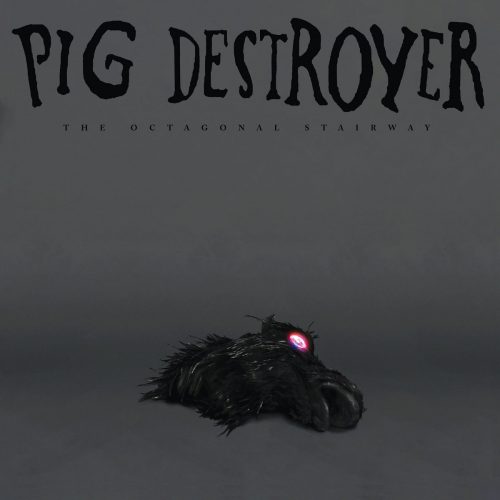 Strangely enough, the idea of tackling The Octagonal Stairway here was a personal challenge since we have already covered the traditional songs present on the EP for the most part in one form or another. Nevertheless, the idea of diving back into them still holds a certain amount of allure, and seeing how they combine with the sound collage and noise experimentation that takes place on the back half of The Octagonal Stairway – which makes up the bulk of this EP’s run-time – is an intriguing experiment.

Pig Destroyer clearly have a sort of musical home turf they can rely on, a chaotic mashing of a bunch of different grindcore subsections all running headfirst into one another, combined with as many different ways to add a sense of tension and unease. Thus, you have the added layer of differing noise patches being spread throughout, electronic hammerings, and a lot of drum work that sounds more destructive to the drum kit than could initially be assumed. That sense of tension and unease – though often released through a sort of cathartic explosion whenever vocalist JR opens up a volley – has long been a vein that the band have mined. One could see why they consistently use smaller releases to experiment with stuff like doom, sludge, ambient, and lighter industrial fare, using the slower motions of those genres to turn them into a slow haunting burn rather than one quick firestorm after another.

The titular “Octagonal Stairway” remains largely unchanged in terms of format since its debut. It does have a newer mix though, with the low end and constant effects brought way to the forefront, actually making it sound a little more like it belongs within the lineup of the group’s Head Cage album. It’s interesting to see what the band focus on with this version of the song, by making its already explosive assault just that much punchier. As it appears here, the song is a full-bodied attack whereas previously it felt more surgically high-end harsh. It’s a mean, blast-heavy track that pieces itself together out of the white noise that initially surrounds it, a sort of pulsating haunt that hovers in the listener’s mind while Pig Destroyer flatten everything with the actual song.

“The Cavalry” and “Cameraman” are tied together in a similar way but it is nice finally having the two more readily available than they were previously. If you’re unfamiliar with the two, “The Cavalry” was written in tribute to Jesse Pintado and so musically has a lot to share with material that he was involved in, steeping the song in some heavy Napalm Death and Terrorizer influences. Given that they’re already a grind act and Head Cage had its fair share of blasting things to hell and back via pit riff, “The Cavalry” is musically an expansion of those ideas. It is also like its immediate predecessor on this EP in that it fades in via electronic interference like a creature struggling to assemble itself and then is almost instantly zero-to-one-hundred on the ferocity scale.

The bulk of this EP is Pig Destroyer playing around with different electronics and samples. They appear to have taken a certain amount of pride in just throwing unexpected and weird material at listeners who might just be coming to them expecting a constant musical flamethrower instead. And so you wind up with the odd decision that after the traditional music segment ends with “Cameraman” stomping skulls in, the rest of the EP alternates between a constant reminder of the state of the world – on fire – with the shorter intro to sound hell that is “News Channel 6”, to an actual “Head Cage” piece – whose constant pulsating static, white noise, and melting voices sound like the electronic interference that the music early on was battling has finally claimed victory.

Then you get “Sound Walker”, which is responsible for about sixty percent of the EPs length and sounds like the most industrialized music the band have done to date combined with Trent Reznor‘s work on the Quake soundtrack. The constant fading ambience combined with a quiet and haunting beat conjures images of being lost in a multitude of empty hallways, which to be fair, fades excellently back into the opening blasts of the EPs title song if you just let things loop back around.

For the most part you’re grabbing The Octagonal Stairway for the opening three songs. It’s nice to have them all located in one package instead of scattered about as singles over the years, and having them receive new treatment is also a plus. The title song having a much beefier sounding approach to the low end really highlights just how punchy that track was back when it first came out. The more experimental side falls into the “your mileage may vary” category. Having them in one dense block at the end is a debatable move. but considering how strange Pig Destroyer are willing to get with their releases, there’s a certain sort of freewheeling impulse that might be expected. Those tracks do make for interesting breathers when they pop up in a full-discography shuffle for the band though, but that’s more like being thankful for a brief breath of fresh air before being thrown back into a furnace.

As it stands right now, even when a release like this could have just been a packaging together of singles, you can rest assured that the Pig Destroyer crew will continue to throw curveballs at you.

One Response to “PIG DESTROYER: “THE OCTAGONAL STAIRWAY””