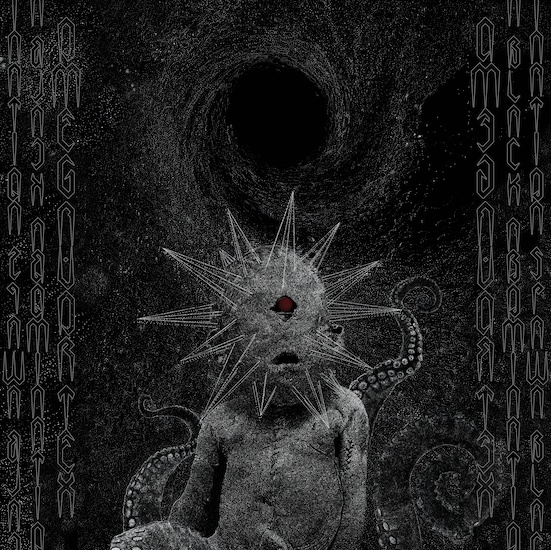 Omegavortex occupy a rare place in the hostile landscape of blackened death metal, where it often seems that everything is trying to kill you. In thinking about their music, metaphors like “maelstrom” and “vortex” come to mind, because the fury is explosive, chaotic, and rampantly destructive — but the band’s rocket-fast execution is technically mind-blowing and the composition of their songs is ingenious, albeit thoroughly demented.

These Germans were born under the name Ambevilence in 2007, and spent the first decade of their existence under that banner, but adopted their new name before releasing a 2018 promo. They followed that with the Spectral Blackness compilation and now at last have produced a debut album set for release by Invictus Productions on November 13. As fitting as their newer name is, the title of the album is equally evocative of the audio experience: Black Abomination Spawn.

If you haven’t yet heard any of the music on the new record (one song has been out in the world for a month), we’ll give you the chance to teleport yourself into the Omegavortex madhouse today through our premiere of the album’s fourth track, “Void Possessor“. 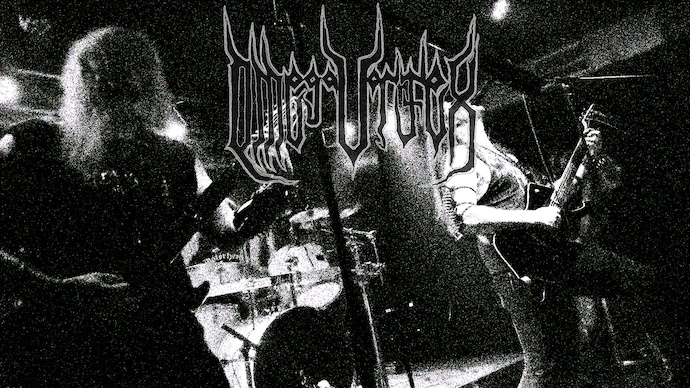 Special mention should be made at the outset about the ingenuity of the production. Working with Patrick Engel at Temple of Disharmony, the band achieved a sound that’s unmistakably raw and abrasive, yet not so rough or dirty as to obscure the fiendishly rapturous contributions of each instrumental performer in these tornado-like assaults on the senses. Granted, you will probably have to listen more than once to fully appreciate what each performer is doing, but even on a first run through the gauntlet each one still manages to seize attention.

“Void Possessor” wastes no time mounting the attack (and in general, this band sound like they don’t have a minute to spare), discharging bursts of hammering drums swathed in a roiling mass of crazed riffing and savage goblin howls. Blaring chords flare out in grandiose fashion as the drumming cavorts and erupts in brutalizing bursts and the bass rumbles and thunders in manic and mesmerizing fashion. The rapidly veering fretwork includes spurts of white-hot shrieking and angular darting, but the band also segue into a magisterial stomping march as the guitars skitter, swirl, and soar.

It really is a glorious madhouse of sound. Too many moving parts to readily assimilate, it’s best just to take a bunch of deep breaths and let yourself be carried away.

We mentioned another song that’s been out in the world for a month, and we urge you to check that one out too. That previously released track, “Cosmic Horror Maelstrom“, combines gloriously delirious ferocity with hook-heavy riffing, skull-busting grooves, and the voice of a demon beast roasting in the depths of hell. It’s yet another thrilling combination of unchained wildness and beautifully thought-out songwriting structure.

Eventually, you’ll have the chance to hear other songs from the album. Particularly on the record’s second side, the band reveal other dimensions of their sound besides their demonstrations of mind-ruining mayhem — experiences that are more alien and blood-freezing in their atmosphere, perhaps even more overpowering in the immensity of their assaults and even more magisterial in their abominable wickedness.

Invictus Productions will release Black Abomination Spawn in vinyl LP, digipak CD, and digital editions, all of it adorned with the transfixing cover artwork of Henry Mann.