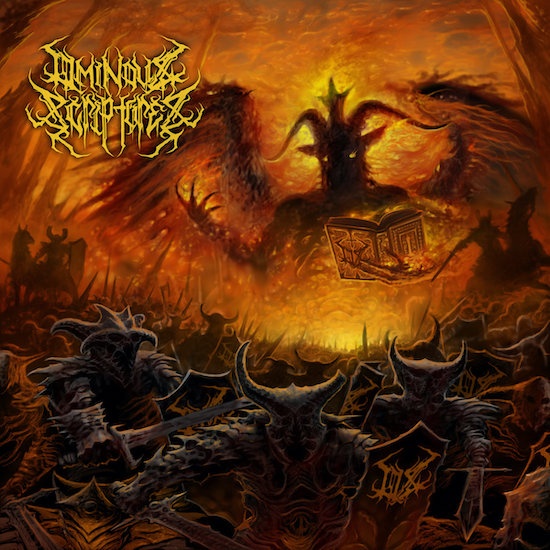 (Here is Vonlughlio’s review of the second full-length by the Belarusian death metal band Ominous Scriptures, which is out now on Willowtip Records and features striking cover art by Jon Zig.)

I have to say that I have been fortunate to write my small reviews and lists of best releases for some years now and am thankful to Islander for the trust.  As I’ve mentioned, my main purpose is to promote Brutal Death Metal since other genres are well-covered here. Having said that, yes I do listen to other genres as well but for the reasons mentioned I try to focus on BDM here in NCS, and am doing that again now.

Today the subject is a project from Belarus that goes by the name Ominous Scriptures. On August 28th they released their sophomore album The Fall of the Celestial Throne via Willowtip Records. This release is crushing from start to finish, revealing the work of outstanding musicians who have come together in crafting something special that will forever be cherished by their fans. 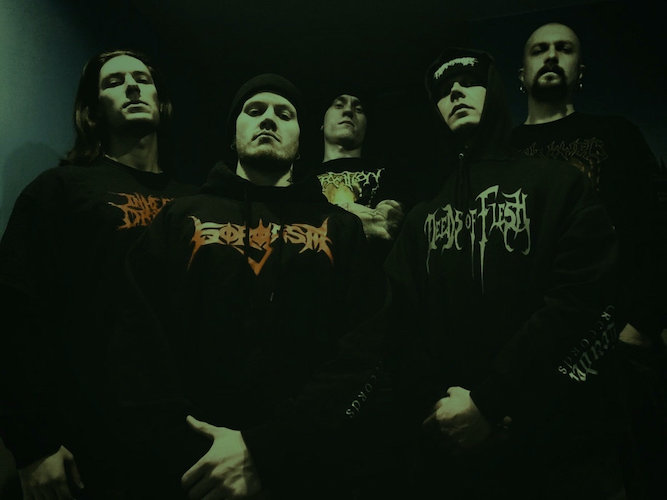 The inception of the band goes back to 2013. The following year they released a two-song promo that gave a clear idea of what they were striving for lyrically and musically.  Pretty much straightforward BDM, it had a raw sound that went well with the songwriting. It was not until 2015 that they released their debut full-length Incarnation of the Unheavenly, and that’s when yours truly found out about them.  I was blown away right away with this effort, which again generated a raw sound filled with blast beats, killer riffs, and low guttural vocals that made me an immediate fan.

Like many underground projects they faced some challenges thereafter, but were able to release another two-song promo in 2017 which further showcased their talents and left fans wanting more. So after a couple more years they announced their partnership with a new label, Willowtip, which has some great acts in their roster (including Devangelic, Defeated Sanity, Unfathomable Ruination, Desecravity, Unmerciful, Pyrrhon, Relics of Humanity, Schizogen, Putridity, and Odious Mortem, just to name a few) and has done a great job in supporting their acts.

Earlier this year they announced they would release their sophomore album and subsequently revealed a new song (“Incinerating Winds of the Apocalypse”), and wow!! The music and the punishing vocals were on another level. So I pre-ordered it quickly, and when it arrived I listened to it three times in a row, and many other times since then. They’ve continued with their Satanic, anti-religious, and apocalyptic lyrical themes (which are evident in their song titles) while the music has progressed into something even more special that before. The songwriting is outstanding, and the deep vocals are filled with patterns that engage superbly with the driving riffs and the massive drums.

After the release the reception in the scene has been overwhelming positive, with high praise coming from fans around the globe.  Some have called this release an incarnation of a classic BDM band (though I don’t feel like mentioning which one), and to some extent I agree because there is an influence — but Ominous Scriptures have taken their influences to another level, and the end product is very much their own. I strongly believe that this release will become a classic and an inspiration to new BDM bands that arise with an inclination to pursue this type of brutal sound.