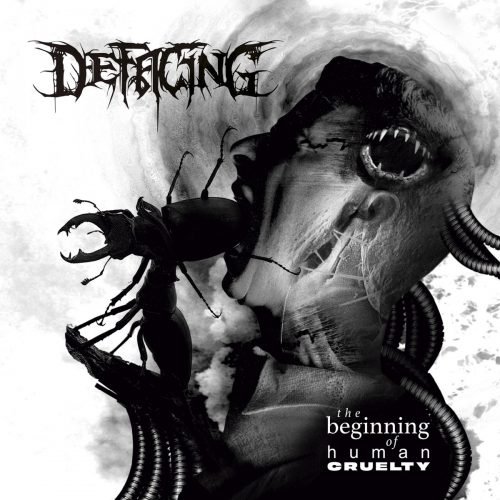 (Here we have Vonlughlio’s recommendation of a new compilation record by the Chilean brutal death metal band Defacing, which is out now on Rotten Cemetery Records.)

Defacing is one of the best BDM acts from Chile. Originating back in 2001, they graced us in 2003 with their demo The Beginning of Human Cruelty, a display of powerful in-your-face Brutal Death that has all the qualities fans of the genre love.  But it was not until 2005 with the release of their debut album, the well-named Spitting Savagery, that I was able to discover them.

A friend of mine said when we listened to the album (and I quote) “South America Cryptopsy twins”, and the funny thing is, they cover “Phobophile” on this release (which is hands-down an amazing cover). But for me, they are not twins. Sure, there is a strong influence, but Defacing still managed to create a special sound.  For 31 minutes you find yourself in constant movement with the punishing riffs, the blast beats, and vocals that are utterly nasty and full of hate.  This album made an impact that still holds 15 years after its release, an underrated gem of one great project.

Taking into consideration the location and the genre of the project, if you think it’s hard for bands in the U.S. and Europe to make an impression, in South America it’s more difficult.  But the members knew this, and they kept pushing forward, on their own terms, without a care in the world.  So after five more years they released their sophomore effort Homicidal Satisfaction in 2010, continuing the path of destruction and providing songs that are representations of Brutal Death Metal in its purest form.

Through the following years Defacing saw their share of struggles that slowed them in releasing new music. Nonetheless, they continued to practice and create, without compromising their artistic vision for anyone. That alone commands a level of respect and admiration.  A few years ago, they signed with Rotten Cemetery Records, a Chilean label run by Jorge “The Professor”, who is also the guitarist/founder of Decrepit Cadaver (one of my favorites from Chile).

So early this year, the label announced the release of The Beginning of Human Cruelty – Destroying Your Dignity, which consists of eight songs. The first four are remastered tracks from that first demo in 2003 (and they sound better in my opinion) and the last four are a new EP with the title Destroying Your Dignity. This new EP includes two new songs and re-recorded versions of two other tracks from their albums, and it features new guitarists. The EP is a testament of how good this band are, and to the steadfastness of their artistic input within the BDM spectrum.  Revealing a force that has not slowed down one bit, these new songs are fast, relentless blasts, continuing to bring gripping riffs and vocals that spit out pure ferocity.  Overall, this is one of the best BDM EPs of 2020.

This new compilation is out now, and I hope you’ll enjoy the stream below and support Defacing if you can.