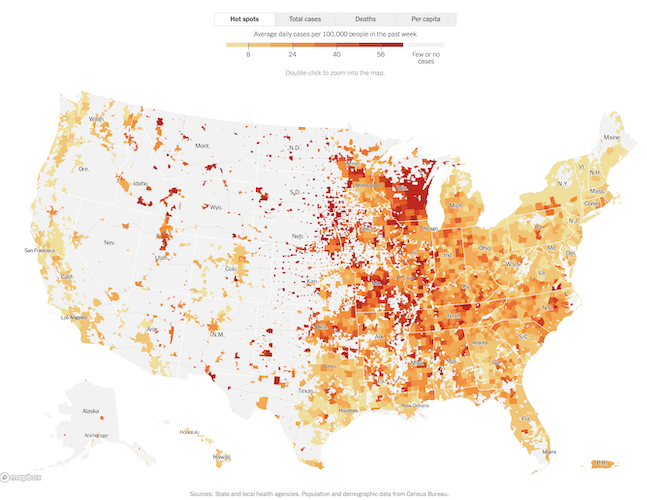 I haven’t done this in a long time, so long that I had to research when the last time was — and it was in May, if you don’t count a post I made in July soon after the Covid death of a man who was an influential mentor and father-figure in my life. But I was stunned to see a map and accompanying data this morning, which made me think it was time again to invite people to share their thoughts about what has been happening to them and their communities during the pandemic. As usual, I’ve included some new metal for people who don’t feel like doing that.

That map I saw is the same one you can see at the top of this post. It was accompanied by this chart: 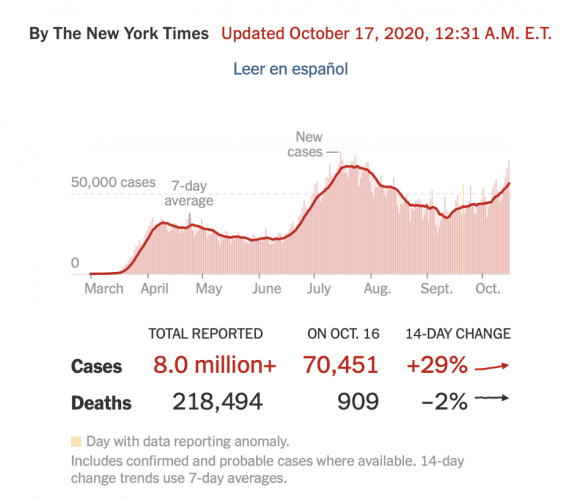 This shows that at least 909 new coronavirus deaths and 70,451 new cases were reported in the United States on October 16th. Over the past week, there have been an average of 56,040 cases per day, an increase of 29 percent from the average two weeks earlier. As of Saturday morning, more than 8,090,500 people in the United States have been infected with the coronavirus and at least 218,400 have died, according to a database maintained by The New York Times, which is where I found this dismal news (here).

That 70,451 number is eye-popping because it’s close to the all-time daily high of 73,523 on July 24th. In other words, here in the U.S. we’re in the vicinity of a new peak that would rival the worst days of the outbreak over the summer.

This trend isn’t unique to the U.S., of course. According to this Associated Press article from two days ago:

“Coronavirus cases around the world have climbed to all-time highs of more than 330,000 per day as the scourge comes storming back across Europe and spreads with renewed speed in the U.S., forcing many places to reimpose tough restrictions eased just months ago.

“Well after Europe seemed to have largely tamed the virus that proved so lethal last spring, newly confirmed infections are reaching unprecedented levels in Germany, the Czech Republic, Italy and Poland. Most of the rest of the continent is seeing similar danger signs.

Here are the global data tables and a global map of national hot spots from this morning’s on-line edition of The New York Times (here): 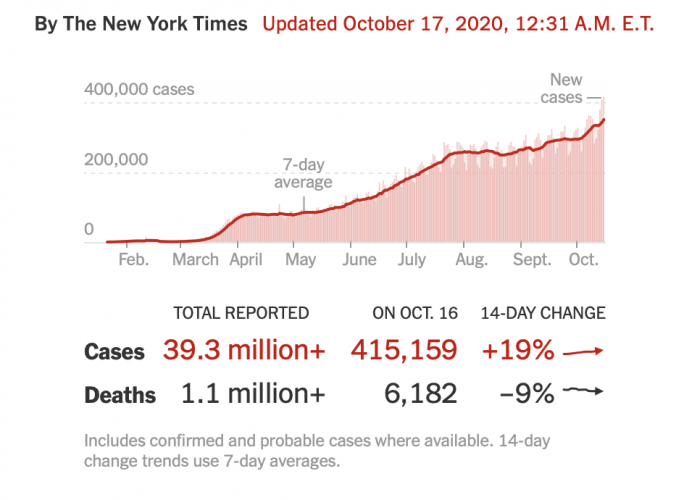 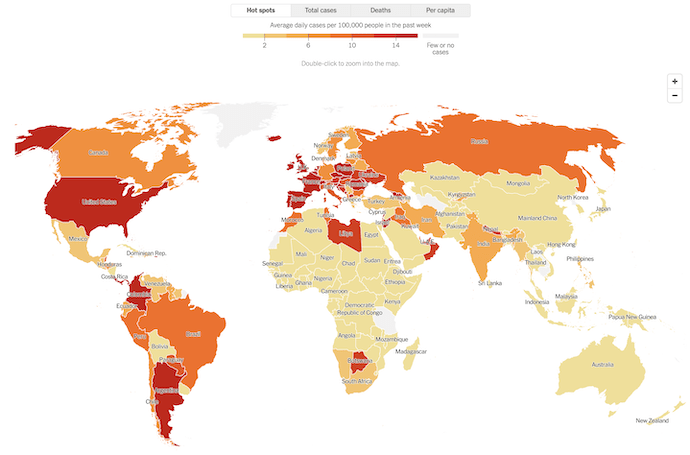 Apart from the illnesses, the hospitalizations, and the deaths these numbers portend, what they also portend (to my way of thinking) is that I’m going to continue being stuck inside my home for many months to come, just as I have been for the last 7 months. And that fucking sucks.

Which is the segue to me doing what I’m inviting you to do in the Comments, if you feel like it, which is to share what’s happening in your life during the pandemic now that we’re approaching winter in the northern hemisphere and summer in the south.

For me, I still count myself fortunate that I have a job I can do from home. My employer’s offices in downtown Seattle are still closed. Permission is required for anyone to work there, under severe restrictions about how many will be allowed and prohibitions on any personal interaction among the few who are permitted. There’s really no reason to even ask for permission unless you’ve got little kids at home who are driving you to the brink of insanity. I have cats instead of kids, and they help keep me sane, so no thanks. (As for the loris horde that I guard against, their efforts to escape their compound and wreak havoc on humanity have diminished — they chuckle in their fiendish way, realizing what an outstanding job humanity is doing to destroy itself without help).

I guess I’ve adjusted to working where I live, about as well as I’m able, but I don’t love it. I miss the people I work with. Zoom get-togethers for work and socializing are a poor substitute. I miss tons of other things too. Facebook is giving me near-daily reminders of things I used to do for fun, most recently showing me videos I posted four years ago of live performances at California Deathfest. I really fucking miss going to shows and festivals.

Even in the good old days there weren’t many clubs in Seattle that featured metal bands. There are even fewer now. The tiny number who haven’t closed permanently are hanging on by their fingernails, begging like many other music venues for meaningful government assistance, which hasn’t been forthcoming. I have no doubt the same thing is happening everywhere else in the U.S. Even when touring becomes a possibility, where are touring bands going to play? Basement shows across the country aren’t going to cut it.

I also despair that there won’t be a resumption of fests in the U.S. next year. We postponed the fourth edition of Northwest Terror Fest from late-May/early-June 2020 to June 3-5, 2021. We’re crossing our fingers that it will be possible, but it’s way too soon to know at this point. And even if it’s safe to do it next June, what about the bands who were planning to tour through to perform at the fest, or the ones who were going to fly in from other countries? Who the hell knows.

It’s not just metal shows I’m missing. I still don’t leave my house much more often than I did last spring. There are a couple of restaurants on the Puget Sound island where my wife and I live that have socially distanced indoor seating, and we feel comfortable enough to go to one of them about once a week. We’ve made a couple of weekend driving trips with friends in our social bubble, and those turned out to be safe. Beyond that, it’s only occasional trips to the grocery store and the pet store. I just don’t feel like taking any chances, given my relatively advanced age and extensive history as a smoker.

I’ve tried to go for walks more often, but without much success. During the summer I made an effort to shed the covid 19 pounds I’d gained during the spring, cutting back on the oceans of alcohol and mountains of fattening comfort food I’d been consuming. I got about halfway back to where I used to be before my waistline ballooned, but over the last month I’ve been going back in the other direction. I made improvements in my mental and emotional health over the summer too, mainly due to nice weather (barring the week when the Seattle area was suffocating in a toxic miasma of wildfire smoke) and having to throw myself more intensely into work. That improvement is now being reversed too.

It has sunk in to me that we’re going to be stuck with this pandemic and every rotten thing it has done to daily life for a very long time to come, and life isn’t going to improve until proven safe and effective vaccines are developed and widely administered — because we as a country are incapable of “flattening the curve”. There are just too many morons and con-men (and women) in positions of “leadership”, and too many idiots everywhere else. As for hopes of safe and effective vaccines, widely administered, that ain’t happening in what’s left of this year, and I’ll be surprised if it happens by next summer. That’s a discouraging realization.

We’ve also got a fairly important election here in the U.S. 17 days from now. Anxiety over that also has something to do with my own deteriorating physical and mental condition. Since 1991, Washington State has mailed ballots to every registered voter. My ballot for the November 3 election should hit my mailbox today or Monday. I’m going to fill it out the day it arrives and drop it in an official curbside ballot box about a five-minute drive from my house, and then hold my breath for about two more weeks to find out what happens. I’m glad I don’t have to stand in line on election day, though I guess that wouldn’t be terrible, even though it would be less safe: In a very real way, it would be doing something courageous, and we need more acts of courage in this fucking country rather than acts of connivance and cowardice.

Well, I’ve rambled on far longer than I anticipated. Time for me to turn the forum over to you. So if you feel like it, tell us what has been happening to you over the last weeks and months. What’s now happening in the community where you live? Are you still shut in or moving around more? Are you out of work or still working? And how do you feel about the current situation and about the future? 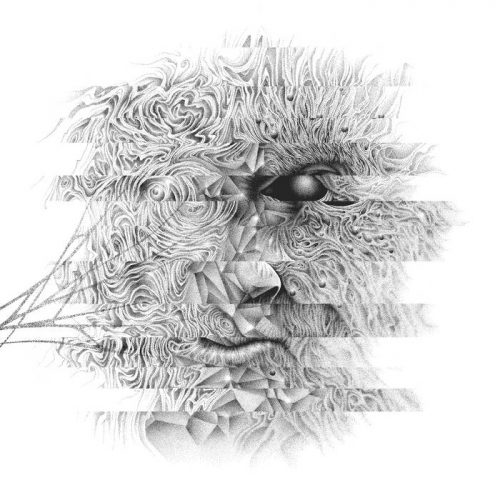 If you don’t feel like sharing, or even if you do, then check out the song below, which is just a tiny fraction of music that emerged over the past week, much of which I just didn’t have time to investigate due to my fucking day job. Hope you like it, and by all means, feel free to share whatever music has been juicing you up recently.

This particular song, “Fluid Earth Delusions“, is by the Greek band Vacantfield. It’s a blazing, ravishing spectacle of sound — which then changes in many unexpected and equally glorious ways, both instrumentally and vocally. As riotous as the song often is, it’s spellbinding as well as mind-boggling, frightening as well as exhilarating. It’s so fascinating, so inventive, and so persistently surprising, that I haven’t been able to stay away from it for long at a time.

The song first appeared on a Vacantfield EP named Idle that was independently released in May of this year as a digital download. I know from previous experience how good this band is, and so I’m kicking myself for not paying attention to Idle when it was first released. I paid attention to it this morning because it’s one of 12 tracks on a label sampler digitally released by Oslo-based Duplicate Records just a couple of days ago. As you might guess from that fact, Duplicate is going to release a CD version of Idle — on October 30th. It’s available for pre-order here:

I’ll be back tomorrow with the usual Sunday SHADES OF BLACK column. Until then, wear your mask, wash your hands, and stay far away from morons. AND ENJOY VACANTFIELD!

20 Responses to “STAYING IN TOUCH (AND SOME MUSIC BY VACANTFIELD)”