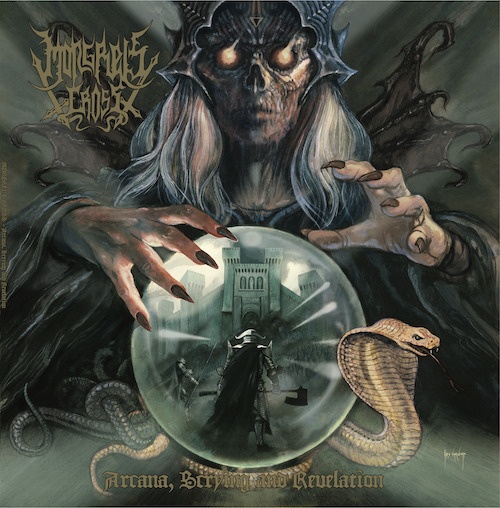 Two years ago we had the pleasure of premiering a full stream of Psalter of the Royal Dragon Court, the second album by the Australian extreme metal duo Mongrel’s Cross. As we wrote of the album in an accompanying review: “It’s ravaging and regal, sinister and searing, warlike and overflowing with a kind of mythic grandeur. It’s the sound of saga, with an aura of larger-than-life fantasy surrounding all of its movements. And it’s almost relentlessly explosive, blazing like a comet in the heavens, or like the fireballs erupting from that clash of titans on the cover.”

We might have gotten carried away with words (as we admitted at the time), but the album had such high-flying splendor (and feral savagery) in its amalgam of black thrash and epic heavy metal that it was hard to stay calm. And thus it was exciting news to discovery that Mongrel’s Cross would be returning this year with their third album, Arcana, Scrying and Revelation. Like the first two, it will be released by Hells Headbangers Records, and we again have the chance to spread the word with another Mongrel’s Cross premiere, in advance of the record’s November 27 release. 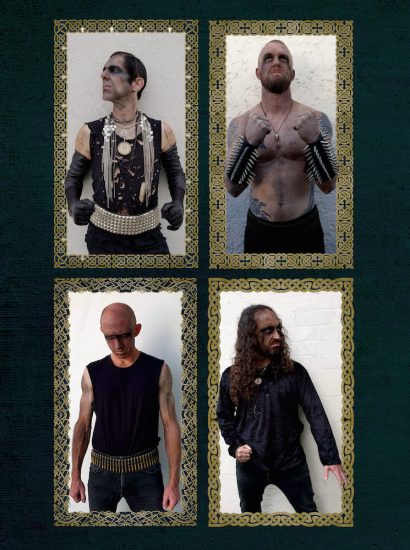 The band have now expanded from a duo to a quartet, but the fundamentals of their sound remain steadfast. As you’ll discover in the song we present today, “What the Cards May Tell“, there is still a mythic atmosphere in their music — an atmosphere of magic, mystery, and menace. The songwriting also remains richly embellished as well as quickly addictive, and the tracks still provide blood-pumping showcases for guitar spectacles that will get your head moving and your clawed hands raised toward the heavens.

“What the Cards May Tell” is a glorious blaze of fiery, flickering leads and brazen chords, hurled forward by piston-pumping drums and matched by savage lycanthropic snarls and howls. The song also rocks and jolts, sways and swirls, and a pair of sorcerous solos adds to a growing atmosphere of sword and sorcery, making the song as much a partaker of grand, classic heavy metal traditions as thrashing black metal. But the song is also a fast-charging screamer, with rapidly swirling melodies adding to a mood of sinister, otherworldly, and bewitching menace. As the music begins to dart and pulse, yet another pair of solos adds to the shining, banner-waving glory of the sound. And thus this one song by itself proves how fitting the album title is: Arcana, Scrying and Revelation.

Hells Headbangers will released Arcana, Scrying and Revelation on LP, CD, tape, and digital, with related apparel, and all of it features the evocative cover art of Kris Verwimp. Again, November 27 is the release date, though pre-orders are open now. And in addition to today’s premiere we’re giving you the chance to catch up with a previously released track, “Suffer the Witch To Live“.