The thing is, it seems like even the band themselves must have been feeling like they’d lost their way a little, as the press materials and interviews for their new album explicitly refer to a desire to return to the style and spirit of their early days… which brings us to Endless Twilight of Codependent Love. 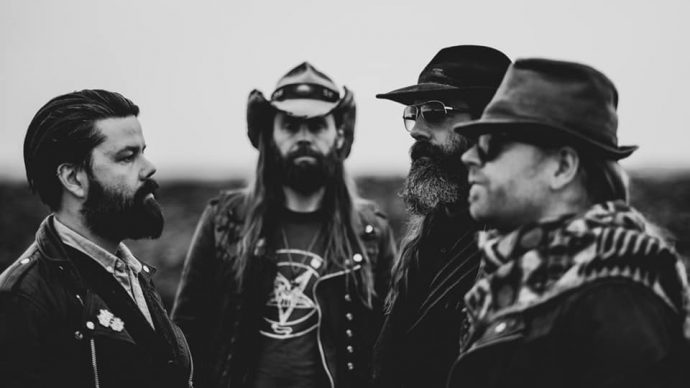 It’s immediately apparent, right from the start, that the group’s claims in this regard have not (with a few exceptions) been exaggerated, as much of Endless Twilight… really does echo the moody aesthetic and brooding dynamic of their “breakthrough” period (Köld in particular).

There’s simply that much more energy and urgency, more passion and personality, to many of these tracks – from the thrilling pairing of electrifying opener “Akkeri” and its doomy, hypnotic companion “Drýsill” to the reckless gallop of “Dionysus” and the rhythmic, melody-rich strains of “Alda Syndanna” – that the record as a whole can’t help but feel that much more vital, and more substantial, than anything the band have done in years.

Of course, there’s a chance that this semi-return to the band’s roots might seem a little jarring to fans who only really know them for the more restrained riffs and poignant, piano-driven balladry of more recent years, but that’s not to say that they’ve totally forgotten or discarded everything they learned during the Ótta/Berdreyminn era either.

The back-half of “Akkeri”, for example, embraces the sort of melancholy minimalism which defined “Nárós” (and others) on their last album, as well as a more loose and limber, post-Thin Lizzy swagger reminiscent of tracks like “Nón” and “Bláfjall”, while the radio-ready “Her Fall From Grace” seems to consciously hearken back to the band’s heart-wrenching break-out single “Fjara”, while also reflecting the more introspective focus of later numbers such as “Miðaftann” and “Hula”.

That being said, these attempts to draw together different (potentially competing) aspects of the band’s identity aren’t always as successful as perhaps they might like. The subtly-symphonic ambience of “Rökkur”, for example, doesn’t always mesh with the song’s sullen, grungier vibes, while “Til Moldar” mostly comes across like a heartfelt, but oddly insubstantial, left-over from the Berdreyminn sessions that never really gets wherever it’s meant to be going.

And then there’s “Or”, which can’t seem to decide whether it wants to be the soundtrack to a smoky jazz club or a dusty saloon bar, and ends up falling (drunkenly) between two stools as a result, only to pick itself up right at the end in a frustrating display of untapped, unrealised potential.

That’s not to say that the quartet haven’t put their all into this record – it’s clearly the product of a much more vibrant and revitalised version of the group than we’ve seen in quite some time – but there’s still a sense that Tryggvason and co. may have been a little bit nervous about breaking out of their well-established rut this time around, and this slight (albeit understandable) lack of confidence does sometimes mean that, every so often, the band settle for the safer, more familiar path, or stumble over how best to handle this shift in dynamic, instead of sticking to their guns.

Still, as I hope I made pretty clear at the start, there are more than enough flashes of the band’s early energy and raw charisma to be found here – not least during captivating closer “Úlfur”, which is easily one of the best songs on the album and a great way to keep listeners coming back for more –  to serve as a welcome reminder of just what Sólfstafir are capable of at their best.

So while Endless Twilight… may not be the “masterpiece” which I’ve seen it praised as by other (shall we say, more co-dependent?) publications, there’s more than enough promise and potential here to suggest that maybe, just maybe, the band’s best years aren’t behind them just yet, and that these space-cowboys aren’t quite ready to be put out to pasture.